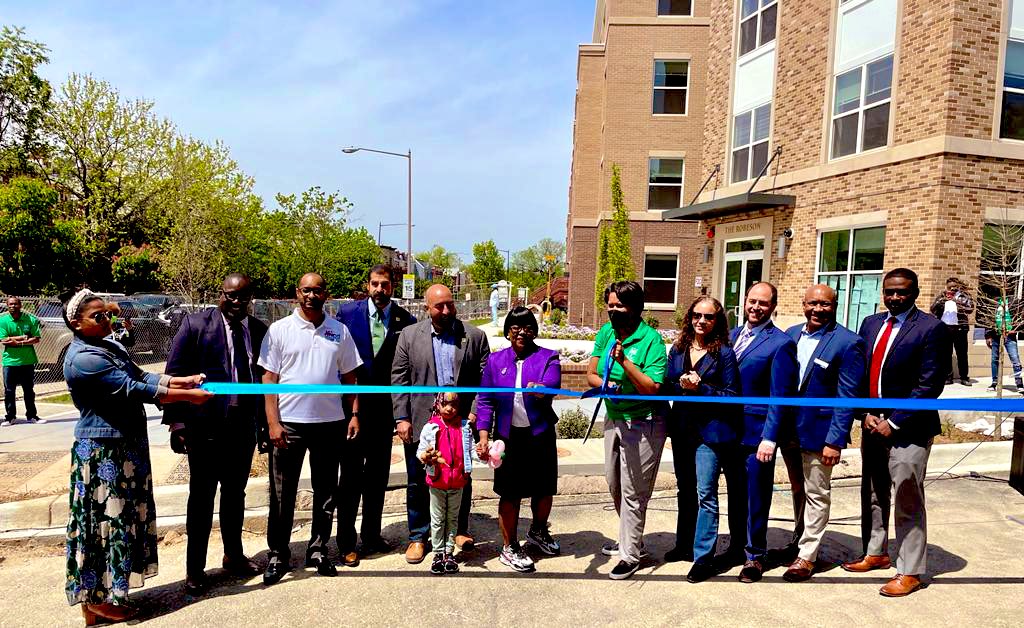 “Mayor Muriel Bowser, the Office of the Deputy Mayor for Planning and Economic Development (DMPED), the District of Columbia Housing Finance Agency (DCHFA), District leaders, and community members participated celebrated the opening of The Appleton, The Robeson, and The Rows, three communities that make up the Spring Flats redevelopment that transforms a previously blighted site into affordable housing for seniors and families as well as homeownership opportunities. In total, the Spring Flats project is delivering 185 housing units, of which 149 are affordable. The Appleton is providing 88 affordable units for seniors. The Robeson offers 87 apartment units for mixed-income households, and The Rows offers ten townhouse-style condos.

“With Spring Flats, we are proud to be delivering a project that the community asked for – housing for families and seniors here in Petworth, close to public transportation and close to all the great things that are happening in this neighborhood,” said Mayor Bowser. “I’m grateful for the community members and leaders who worked with us to bring 185 new homes to a great neighborhood and move us 149 homes closer to our goal of 12,000 new affordable homes by 2025.”

The Spring Flats redevelopment was the third project under Mayor Bowser’s “OurRFP” process. “OurRFP” is a community-based approach to developing requests for proposals (RFPs) implemented in Mayor Bowser’s first term to engages residents early in order to ensure their needs, wants, and priorities are understood and considered before crafting an RFP.

“Spring Flats is a big step in creating more economic prosperity and affordable housing options for District residents,” said John Falcicchio, Deputy Mayor for Planning and Economic Development. “We are not only getting closer to Mayor Bowser’s housing goals, but we are also providing access to high-quality housing in high-opportunity neighborhoods.”

The Appleton, an adaptive reuse of the historic former Hebrew Home for the Aged, opened in November 2022 and includes 88 affordable senior housing units for households up to 30% and 60% of the area median income. Closing on the financing for Spring Flats Senior occurred in April 2020 with the financing support of Walker & Dunlop, HUD, Boston Capital, JP Morgan Chase, and the District DHCD.
The Robeson, a new construction of 87 mixed-income rental units on the Paul Robeson School site, will open in May 2022. Fifty-eight units are designated for families at or below 50% of the area median income. The remaining 29 units are unrestricted, with initial rents at workforce housing levels. Closing for the financing for the Robeson occurred on September 15, 2020, with the financing support of Walker & Dunlop, Freddie Mac, Bank of America, Victory Housing, and the District DHCD.
The Rows at Spring Flats, also part of the new construction on the site of the Paul Robeson School, consists of the new construction of 10 townhome-style condominium units. Three of the ten units will be affordable to households at or below 100% of the area median income. Closing for the Spring Flats Row financing occurred in September 2020 with funding from United Bank and Compass Real Estate will handle sales.

The site at 1125 Spring Rd NW was the third project under Mayor Bowser’s “OurRFP” process. After extensive community engagement, both ANC 4C and ANC 1A passed resolutions recommending the proposal by Victory Housing with Brinshore Development and Bank of America Community Development Corporation as their preferred choice.

Spring Flats is LEED Gold certified and features a contextual, contemporary and sustainable design that includes innovative landscaping and improvements to 10th Street, NW, and public green space around the site. The property is located blocks from Georgia Avenue and 14th Street and is a few blocks southwest of the Georgia Avenue-Petworth Metro stop. This exciting redevelopment in the Petworth neighborhood has already begun to bring many benefits to the community, including an improved and rededicated streetscape and public art, among others. Generous grant support to help make these amenities possible was received from The Morris and Gwendolyn Cafritz Foundation, TD Bank Foundation, The Tillman-Thomson Family, Capital One, Bank of America Foundation, and Truist.

While at Spring Flats last year, Mayor Bowser announced a $400 million investment in the Housing Production Trust Fund. In the budget she sent to Council this year for FY23, the Mayor proposes an additional $500 million.

At the start of her second term, Mayor Bowser set a bold goal to deliver an additional 36,000 units of housing – including at least 12,000 units of affordable housing – by 2025. By further equitably distributing these goals across the District’s ten planning areas, Mayor Bowser made DC the first jurisdiction in the nation to create affordable housing goals by neighborhood. From January 2019 through February 2022, the District has produced 21,340 net new units, of which 4,007 are affordable. You can track the District’s progress toward #36000by2025 at open.dc.gov/36000by2025.”