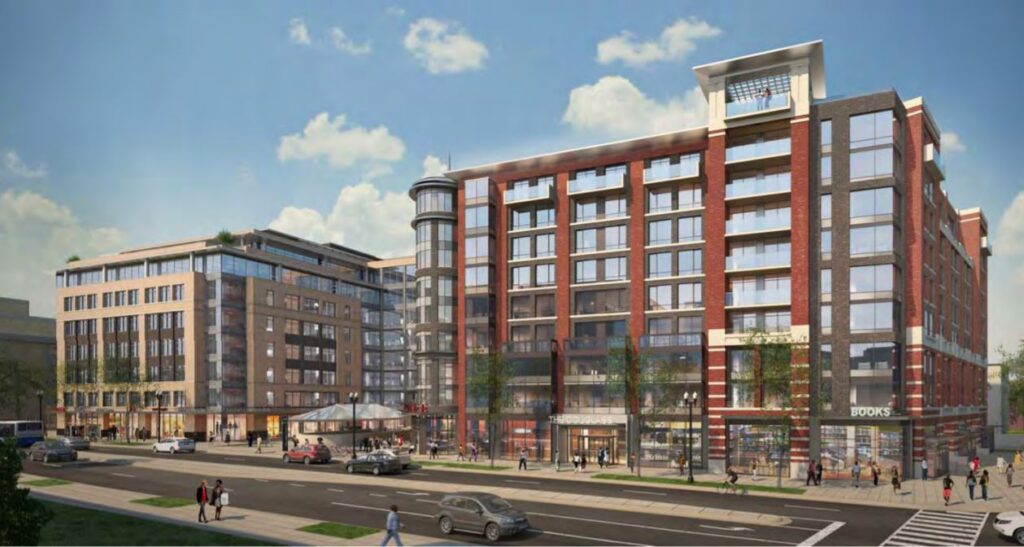 next to 1290 Alabama Ave, SE rendering via WMATA

The land, which is just under an acre, is located at the southern entrance of the station. The lot will become part of a larger two-acre mixed-use development with plans for a 240,000 square foot office building and 179 affordable housing units at 30-80 percent of area median income levels that are supported by the District’s Nonprofit Affordable Housing Developer Tax Relief program.

“Mayor Bowser has carefully led the transformation of St. Elizabeth’s East, so it reflects the interests and needs of the Congress Heights neighborhood,” said Deputy Mayor for Planning and Economic Development John Falcicchio. “This mixed-use development across Alabama Avenue SE will complement that work and ensure that both entrances to the Congress Heights Metro Station bring vibrancy to the neighborhood while also advancing DC’s goal of 36,000 new homes by 2025.”

Metro is a national leader among transit agencies in fostering private sector development on transit properties. To date, joint development projects at 27 stations have delivered more than 13 million square feet of office, residential, hotel and retail space. Metro’s transit-oriented developments contribute more than $42 million in annual tax revenue to local jurisdictions and have increased property values within a half mile by more than $160 billion.

“We are pleased to be a part of this project that generates new economic vitality to the community and affordable housing, as well as new ridership,” said General Manager/CEO Paul J. Wiedefeld. “The sale of this land will support reinvestment in our core business and provide more access to transit in the communities we serve.”

“Through this intricate transaction we take a giant step toward unlocking the benefits of this extremely well-located site through the office project we’ve planned with Trammell Crow Company and the affordable housing units that National Housing Trust will develop,” said Jerome Nichols, President of Standard Real Estate Investments.

Development of the land will support efforts by the District to enhance and stimulate growth at the former St. Elizabeth’s Hospital site, which is immediately adjacent to the Congress Heights Metro Station.

The sale delivers about $3.1 million to Metro to support its transit operations. Metro will retain full operational control of the station including the entrance, tunnel and related facilities. The main entrance to Congress Heights Station, bus loop and Kiss & Ride areas located across Alabama Avenue from the development site will not be affected by the project.”

Read more →
More Stories
A moment to appreciate this awesome snow sculpture before round two of snow comes tonight?Today in Hawks* around Town – Eagles on U Street, Rock Creek Park and Rehoboth!!