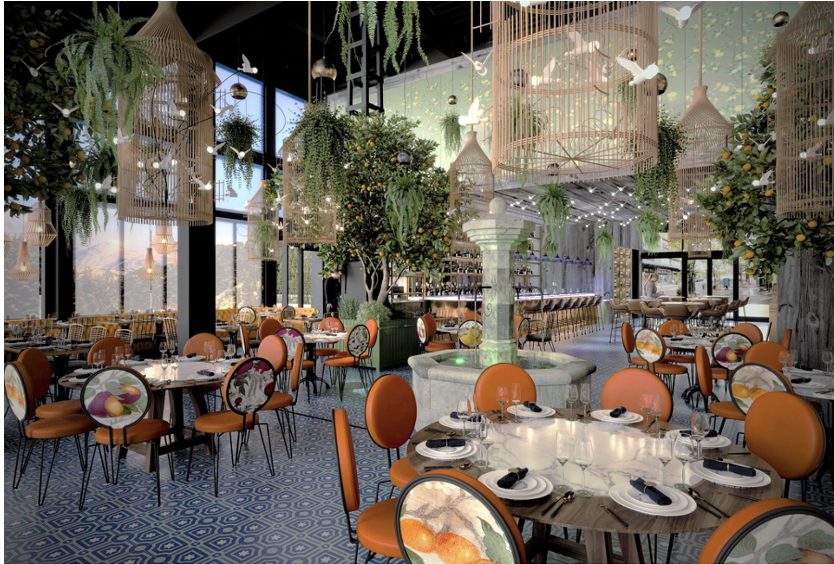 Check out some sample menus here.

“ilili D.C. is officially opening its doors on October 7th, 2021. A sister to one of New York City’s most time-honored restaurants known as the premier institution of Lebanese food culture and hospitality values, ilili, at D.C.’s waterfront neighborhood, The Wharf, will feature the same charisma and quality of the New York City favorite with exclusive features found only at the restaurant’s second locale.

It’s a return for Executive Chef, CEO, and Owner Philippe Massoud, who has previously been a part of D.C.’s restaurant scene as an instrumental influence in the conception and success of the former upscale Mediterranean eatery, Neyla, in Georgetown.

“We’ve poured our hearts and souls into this restaurant,” says Philippe, “and we’re looking forward to being a part of the city’s hospitality evolution that continues to take place here. As our most ambitious expansion of ilili, it’s an important step in our mission to elevate and educate the true meaning of the Lebanese table in America.”

ilili D.C. is an ode to the tables and flavors of Philippe’s Lebanese heritage. Bringing to life the traditions and generosity of his culture, Philippe is ready to welcome D.C. diners with open arms.

The team is eager to bring their love for Lebanese cuisine and commitment to hospitality to the District in a way that’s intentional and focused on the guest experience and so will be opening with a concise menu that will grow and progress over time. As ilili is introduced to and becomes woven within D.C.’s culinary landscape, the team looks forward to creating an establishment as time-honored as the New York City locale, but with an experience and connection unique to Washington, D.C.

ilili’s menu represents a balance and diversity in flavor that provides a melting pot of different experiences. While celebrating Lebanese tradition, the dishes offer creative interpretations using ingredients, spices, and aromas from the Levantine terroir and European influences. Combining modern technique with traditional, Philippe and Executive Chef Walter Silva create a culinary journey for the palate and the senses.

Originally from the seaside city of Lima, Peru’s capital, Walter is familiar with ancient culinary traditions. He pulls the knowledge and inspiration from his upbringing into the kitchen and plates at ilili. His creativity at ilili stems from his voracious research of Lebanese cuisine, diving deep into the culture, and even finding crossover influences within his homeland of Peru, in addition to maintaining relationships with local artisans, fishers and farmers from his past experiences in Washington, D.C.

Walter integrates his experiences and values into all he does at ilili D.C. while honoring and embracing a cuisine that has been influenced by food cultures from all over the world. This passion and knowledge allow Walter to bring a unique experience that is aligned with ilili’s traditions, cuisine, and hospitality.

Served Mezza-style, the opening menu at ilili D.C. invites guests to celebrate life and share sundry blends of modern and traditional Lebanese-Mediterranean cuisine. Philippe and Walter excellently craft a menu abundant in flavorful herbs, spices, and textures, with an emphasis on seafood.

Acknowledging that service is paramount to a guest’s experience and as important as the cuisine, ilili prioritizes its front-of-house team. General Manager Rachid Hdouche joins Assistant General Manager Arielle Morris to deliver a dining experience like no other. From the moment ilili guests walk through the door, the hospitality begins.

Rachid previously worked alongside Philippe at Washington, D.C.’s beloved Neyla restaurant. As an essential element to the opening team, Rachid is excited to work alongside Philippe yet again to handle all things relating to the day-to-day operations of the pioneering brand’s newest and most ambitious outpost. In addition to operations, Rachid will have the opportunity to exercise another passion of his – cocktails. At ilili, D.C., Rachid will collaborate on the drink menu where he intends to present a list that reflects his love for travel and his homeland of Casablanca via exotic ingredients and flavors found in Morocco, Lebanon, and beyond. Keenly aware of the task at hand, Rachid celebrates the challenge of acting as an ambassador and introducing the true spirit of ilili into the diverse, dense, and reputable restaurant scene in Washington, D.C.

A New York City native, Arielle Morris was a neighbor to the time-honored ilili in Manhattan. Visiting often, she finds it a happy coincidence to be on the opening team for ilili in Washington, D.C. As an extension of management within the front-of-house team, Arielle reinforces and extends their efforts while bringing her philosophy of community and care to the service staff of ilili D.C. Arielle brings her tried-and-true service philosophy of treating others the way you want to be treated. This extends not just to customers, but also, and even more so, to her colleagues.

As a space unique to the restaurant’s newest location, ilili D.C.’s design seamlessly blends the indoors and the outdoors together. Created with sustainable materials and custom items from Lebanese artisans, the design is inspired by the enchanted gardens found within the courtyards of longstanding Beirut homes. ilili D.C. transports guests through a towering, attractive, and inviting space with a rich and colorful palette that includes custom daisy tile floors, one-of-a-kind hand-painted wallpaper as well as natural materials throughout like reclaimed barn wood from a Massachusetts tobacco barn, stone, and copper.

An open kitchen is found within, as well as elevated ceilings decorated with white doves, while citrus trees and hanging plants throughout represent Beirut’s diverse flora. To complete the garden atmosphere, a reclaimed water fountain is found in the middle of the dining room. The continuity of the smallest details is seamlessly integrated into the whole, vibrant atmosphere, creating positive energy that flows through the interior and exterior of the restaurant.

*As part of our intentional opening and menu rollout (mentioned above), additional hours, services, and days will come.”