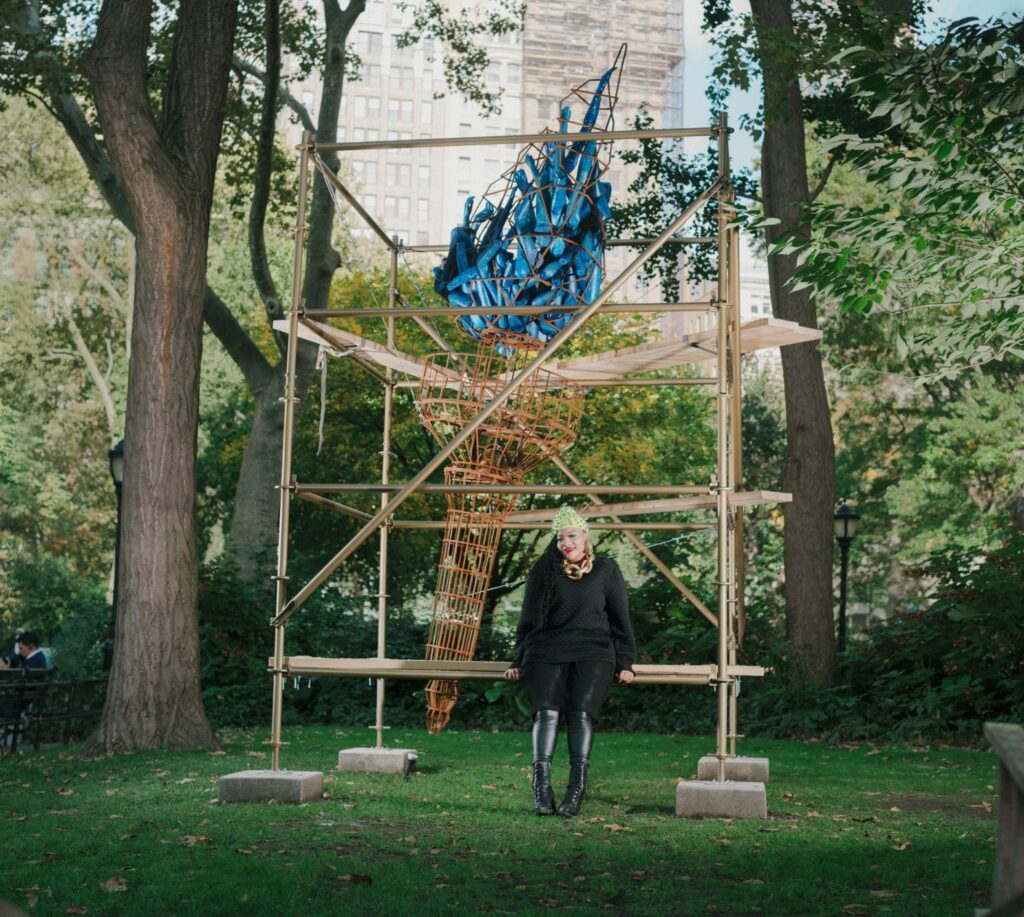 “Set your alarm! Tomorrow, Friday, Oct. 15 at 7:30 am, American artist Abigail DeVille marks the arrival of her multimedia sculpture, Light of Freedom (2020) on the National Mall with the premiere of, WAKE UP: Liberation Call at Dawn (2021) in the Hirshhorn Sculpture Garden. DeVille’s invocation of freedom in voice and percussion includes contributions from artist-scholar-sound healer Jadele McPherson; West African drumming from Farafina Kan, and go-go music from The JoGo Project. The free, outdoor performance begins at 7:30am and last approximately 45 minutes. Registration is appreciated.

WAKE UP is a one-time, site-specific artwork. DeVille created Light of Freedom as “a commemoration of the Black Lives Matter protests and movement and the Black lives here on this continent for 400 years.” Her mixed-media sculpture will be on display on the Hirshhorn Sculpture Garden, Oct. 15-April 17, 2022.

When: Friday, October 15 at 7:30 am. The early morning performance will last approximately 35-45 minutes.

Where: The Hirshhorn’s outdoor Sculpture Garden on the National Mall.

Get to know the artist: Watch Abigail DeVille listens to history (8:11 mins, details her practice, guerilla performances); Abigail DeVille on Light of Freedom (5:49, includes reflections on this work, points of inspiration).

About Abigail DeVille: Born in 1981 in New York, DeVille received her Master of Fine Arts from Yale University in 2011 and her Bachelor of Fine Arts from the New York Fashion Institute of Technology in 2007. Recent exhibitions of her work include Brand New Heavies at Pioneer Works, New York, and The American Future at PICA, Portland. DeVille’s work has also been exhibited at The Whitney, Institute of Contemporary Art in Los Angeles, The Studio Museum in Harlem, New Museum in New York, the Punta Della Dogana in Venice, Italy, and the Stedelijk Museum in Amsterdam. DeVille has designed sets for theatrical productions at venues such as the Stratford Festival, directed by Peter Sellers; Harlem Stage; La Mama; and Joe’s Pub, directed by Charlotte Braithwaite. She has received honors fellow at the Radcliffe Institute for Advanced Study at Harvard, Creative Capital grantee; received an OBIE for design; and has been nominated for The Future Generation Art Prize in the 55th Biennale di Venezia. DeVille was the Chuck Close/Henry W. and Marion T. Mitchell Rome Prize fellow at the American Academy in 2017-2018. She teaches at Maryland Institute College of Art and is a critic at the Yale School of Art.

About the artworks: Friday’s premiere is WAKE UP: Liberation Call at Dawn (2021) is a call for freedom as it pertains to the widely-told American origin stories that erase generations of marginalized peoples. DeVille created Light of Freedom in 2020 as “a commemoration of the Black Lives Matter protests and movement and the Black lives here on this continent for 400 years.” The sculpture which references the Statue of Liberty, was first displayed in New York’s Madison Square Park, then at The Momentary in Bentonville, Arkansas. Its arrival on the National Mall adds a layer of the work’s significance, with new proximity to places of power and protest in the nation’s capital. The performance at 7:30am will reference protest from throughout American history, grounded by singing and percussion, including West African drumming and DC’s own go-go.”