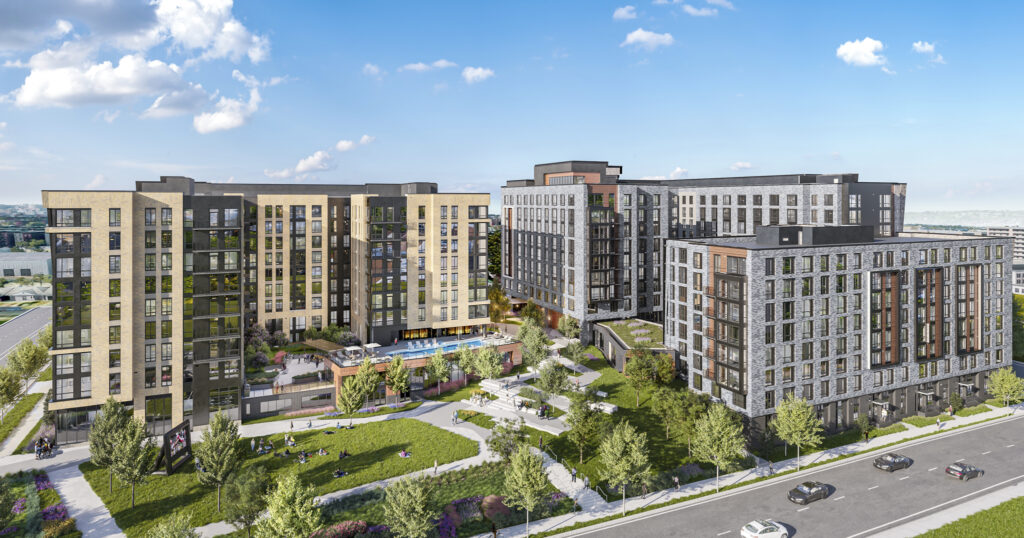 “bounded by M Street NW to the north, L Street to the south, First Street to the west and First Place to the east” rendering courtesy Toll Brothers

“The development team of Toll Brothers Apartment Living and GSLM Capital Partners, a venture of L+M Development Partners and Urban Investment Group within Goldman Sachs Asset Management, unveiled Banner Lane, a vibrant, new residential community that is taking shape in the heart of Washington, DC at the nexus of NoMa, Mount Vernon Triangle and Shaw – three of the fastest growing neighborhoods Northwest of Union Station.

The development team outlined its vision for the Banner Lane community, located on the former site of the Sursum Corda Cooperative, as a place that fosters community spirit by celebrating diversity and embracing inclusivity while encouraging engagement and offering residents a sense of belonging within their own neighborhood.

“We are thrilled to have the opportunity to write a new chapter for this historic neighborhood,” said Charles Elliott, president of Toll Brothers Apartment Living. “Banner Lane will realize our vision to develop a brand that will embody authentic, local character and stand out as a genuine place that embraces local culture, arts, and District pride.”

Banner Lane is a multi-phased project that, at completion, will bring 1,100 residences including 199 affordable housing units and up to 19,000 square feet of retail across four buildings, which will be completed in two phases.

“This is truly an honor to create such a special community,” said Ron Moelis, chief executive officer and founding partner of L+M Development Partners. “Our team worked very closely with Lonnie Duren and the Sursum Corda Cooperative to ensure we listened to their needs and suggestions. Our collaboration is a testament to the core values of this new community.”

Phase one is currently under construction and will deliver 561 apartment homes, of which 118 will be affordable, with a mix of studio, one-, two-, three, and four-bedroom floorplans in two residential buildings.

The southwest building along First Street will comprise 216 apartment homes and feature health and wellness-centered amenities including a cardio and weightlifting gym, a yoga and cycling room, an outdoor yoga deck, locker rooms and a pet spa. There will also be a children’s playroom, a co-working lounge, and a pool on the second floor with cabanas and seating overlooking the community park.
The southeast building will include 345 apartment homes and feature community-driven amenities including a coffee bar, a large co-working space, maker space, game room, full-service kitchen and dining room, a greenhouse equipped with gardening stations and indoor greenery, and a rooftop deck with indoor and outdoor spaces.

In addition to the 25,000 square feet of resident amenities, this phase also includes one acre of public open space. Phase I is anticipated to begin leasing in 2022. The second phase, which includes the north parcel of the site, will deliver the balance of affordable and market rate units and retail.

The property was acquired from the Sursum Corda Cooperative in 2018 and was approved unanimously. By the D.C. Zoning Commission in 2019. As part of the agreement, members of Cooperative will have the right to return to 127 apartment homes in the first phase of Banner Lane.”