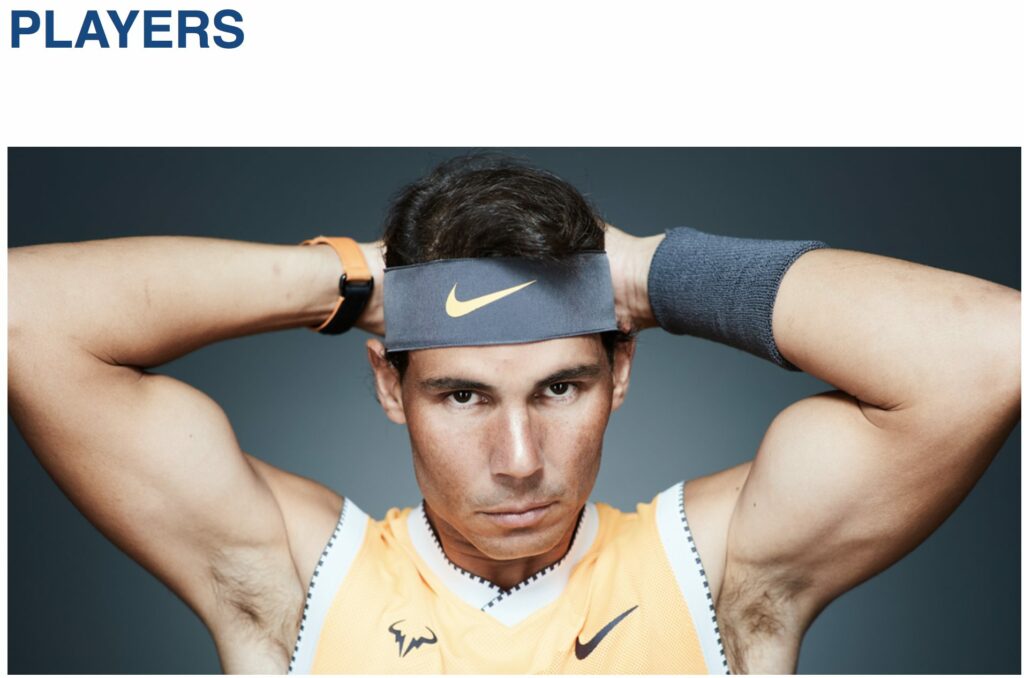 “The Citi Open has had Grand Slam champions before. Arthur Ashe, Jimmy Connors, Ivan Lendl, Andre Agassi all won multiple Slams, but not 20!

That changed this morning, when tournament officials announced that all-time great and 20-time Grand Slam champion Rafael Nadal will make his Washington debut this summer at the 2021 Citi Open, which will be held this year from July 31 – August 8 at the Rock Creek Park Tennis Center, heralding a historic return of Washington’s summer tennis tradition for the 52nd year.

Currently ranked No. 3 in the world, Nadal is arguably the greatest tennis player in the history of the sport.

The Spaniard has won an astounding 13 Roland Garros singles titles and his run of 81 consecutive victories on clay is the longest single-surface winning streak in the Open Era; but Nadal’s dominance in the game transcends surfaces. Born in Mallorca, he has held the world No. 1 ranking for 209 weeks, finishing year-end No. 1 five times, and, to date, has won 88 ATP singles titles, including 36 Masters 1000 (an all-time record shared with Novak Djokovic) and 20 Grand Slam titles (the all-time record shared with Roger Federer.) Additionally, Nadal is a two-time Olympic gold medalist, winning singles gold, in 2008, at the Beijing Games and doubles in Rio de Janeiro, in 2016. 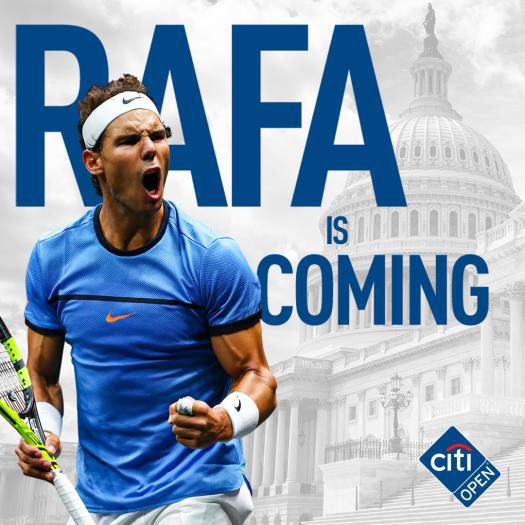 “I am very excited to come to Washington for the first time,” said Nadal. “I have never been there and it’s one more place I wanted to come and play. I am looking forward to playing again and Washington shall be the best start for the US Summer Swing for me. Looking forward to seeing again my US fans that I haven’t seen since I won the 2019 US Open in NYC!. Vamos!”

“We are thrilled to welcome Rafael Nadal, who is not just one of the greatest tennis players of all-time, but also a global sporting icon and inspiring role model to our Washington community this summer,” said Citi Open Chairman and CEO of MDE Tennis Mark Ein. “I can’t imagine a better way to celebrate the joyous return of the things we cherish like live sports, coming together as a community and our historic event than having Rafa and the rest of our very deep and exciting player field competing for the Citi Open title.”

Full-tournament and single-session tickets are on sale now, but due to limited 50-percent fan capacity at the Rock Creek Park Tennis Center, and overwhelming demand for full-tournament ticket packages, as well as single session seats sold, tickets are already 85% sold out.

In his Citi Open debut, Nadal will look to claim his 89th ATP title, but will contend with a very deep field of contenders, including Canadians world No. 12 Denis Shapovalov and Next-Gen ATP star world No. 19 Felix Auger-Aliassime, Polish world No. 18 and 2021 Miami Open champion Hubert Hurkacz, and Russian world No. 29 Karen Khachanov, who collectively comprise four of the recent eight Wimbledon quarterfinalists.

Of the four, Shapovalov is the only player with a win over the Spanish great and just bested Khachanov to reach the semifinals at Wimbledon. Hurkacz also advanced to the final-four at the All England Club, defeating eight-time champion Federer in straight sets. Meanwhile, Auger-Aliassime, at the age of 20, is the youngest player ranked inside the world’s top-20 and is currently being coached by Nadal’s famous “Uncle Toni.”

American world No. 50 Sebastian Korda, 21, and Italian world No. 23 Jannik Sinner, 20, are two more notable Next-Gen stars hoping to make a breakthrough in Rock Creek Park. Since winning the Next-Gen ATP Finals in Milan, in 2019, Sinner has notched two ATP titles and this year reached the final of the Miami Open and fourth round at Roland Garros, before he was stopped by Nadal. Korda, son of former world No. 2 and Australian Open champion Petr Korda, began this season with a final finish at the Delray Beach Open and won his first ATP title this spring in Parma, without losing a set.

Australian world No. 15 Alex de Minaur will be a tough fan favorite to beat. The 22-year-old Aussie and five-time ATP titlist was a finalist at the 2018 Citi Open and he won over DC sports fans during his memorable semifinal victory over Andrey Rublev, saving four match points in a three-set thriller.

The top American ranking will also be up for grabs in DC. Three-time Citi Open finalist John Isner has held the US No. 1 ranking longer than any active player, finishing No. 1 eight of the last nine years. The only player with a better record was three-time Citi Open champion Jimmy Connors (1976, 1978, 1988,) who held the top spot for 9 years. But this spring, California native Taylor Fritz supplanted Isner after making deep runs in Doha, Miami, and Cagliari. The pair were log-jammed with Fritz ranked world No. 33 and Isner No. 34 going into the French Open, but by the end of the tournament, it was 6-foot 11-inch, Michigan giant and current world No. 32 Reilly Opelka who took the top ranking, following a third-round Roland Garros finish. The trio are currently ranked within eight spots of each other and any one of them could emerge from the Citi Open as the US No. 1.

There are also two former champions in the mix, current world No. 22 Milos Raonic (2014) and world No. 53 Kei Nishikori (2015), both of whom are seeking to pick up a second Washington title. Raonic made his Rock Creek Park debut in 2013 and won his maiden DC title the following year at the 2014 Citi Open. Ranked as high as No. 3 in the world, the 30-year-old Canadian will look to win his ninth ATP title in Washington. Nishikori won the men’s singles championship in 2015, the year he reached a career-high ranking of No. 4 in the world, and the summer after he reached the final of the US Open. He memorably defeated Nadal to win the bronze medal at the Summer Olympics, bringing Japan its first Olympic tennis medal in 96 years.

Also making his Washington debut, British world No. 34 Cam Norrie aims to win his first ATP title at the Citi Open and surpass Dan Evans for his country’s top ranking. Norrie recently reached the third of Wimbledon but was stopped by Federer in four sets.

Elsewhere, Bulgarian world No. 21 Grigor Dimitrov, former American No. 1 and former Washington Kastles star Sam Querrey, and hometown favorite Frances Tiafoe are just a few of the names who will join previously-announced defending 2019 Citi Open champion Nick Kyrgios to complete an unprecedented player field, each of whom is capable of beating anyone in the field.

Additionally, the Citi Open still has five wildcards remaining to be announced before and during the 2021 Tokyo Olympic games.

Brady is currently one of the hottest players on tour. The 26-year-old, Harrisburg, Pennsylvania native and UCLA alum first rose to prominence at the 2020 US Open, where she made an inspired run to the semifinals, and she hasn’t slowed down since. Earlier this year, she reached her first Grand Slam final at the 2021 Australian Open and was recently selected as one of four singles players named to the US Olympic team to contest the 2021 Tokyo Games.

Pegula is another fast, rising star. The 27-year-old daughter of Buffalo Bills owners Terry and Kim Pegula won over DC tennis fans in 2019, when she captured her maiden WTA singles title at the Citi Open. Since then, Pegula’s career has blossomed. She began 2021 ranked No. 62 in the world, but a string of consistent results, including a quarterfinal finish at the Australian Open and six top-10 wins, have catapulted her to a career-high No. 26 ranking. Pegula was also named to the U.S. Olympic women’s tennis team joining Brady, Gauff, and Alison Riske to compete for the singles medal.

To learn more and get your tickets to the 2021 Citi Open visit citiopentennis.com”