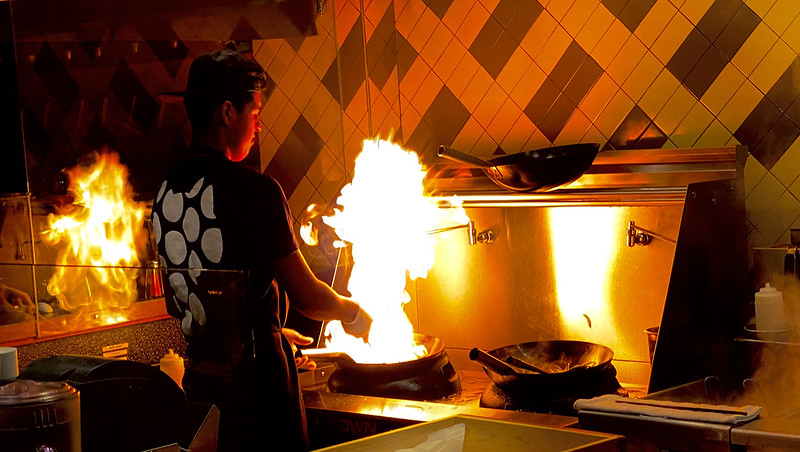 “Hatoba, the Sapporo-style ramen shop in Navy Yard, is expanding its menu to include Hawaiian-inspired favorites, classics and updates.

The Daikaya Group, long known for its exacting dedication to Japanese cuisine and sensibility, takes a cue from chef Katsuya Fukushima’s family connections to Hawaii to bring new dishes and island energy to the restaurant which already means “dock” in Japanese. 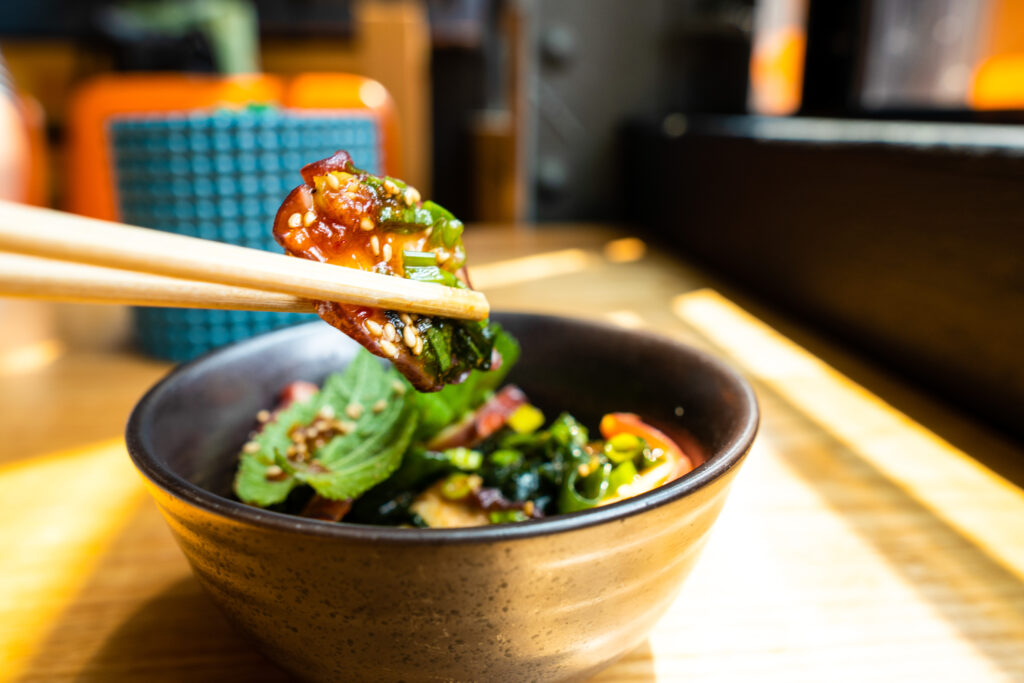 The curated slate of tonkotsu ramens will remain, and will make room for a range of unexpected and modern takes on the 50th state’s food scene. Hatoba’s Hawaiian side highlights the many cultures contributing to the islands’ cuisine–Japanese, Chinese, Korean, Fillipino, Spanish, Portugese and its native population–while also blending modern American-mainland touches.

Saimin, a style of ramen created by immigrant plantation workers, using a clear pork-and-chicken broth with slim and springy noodles, chashu, egg crepe ribbons, and an option to add shrimp wontons. Peel-and-eat North Shore Garlic Shrimp arrives in a luxe buttery sauce, and a hunk of bread to swipe it all up. Unable to bury a boar among lava rocks, this city kitchen instead oven-roasts its Kalua Pig for 12 hours and serves it with a braised-and-seared cabbage wedge, two scoops of rice and a third scoop of Fukushima’s father’s mac salad for a plate lunch, an iconic Hawaiian platter. Loco Moco is a hearty dish comprised of a beef patty (spritzed with sake and liquid smoke during cooking), covered with a fried egg and mushroom gravy atop white rice. Restraint and quality fish define Poke, with a minimally dressed ahi tuna, plus watermelon and tako (octopus) versions. 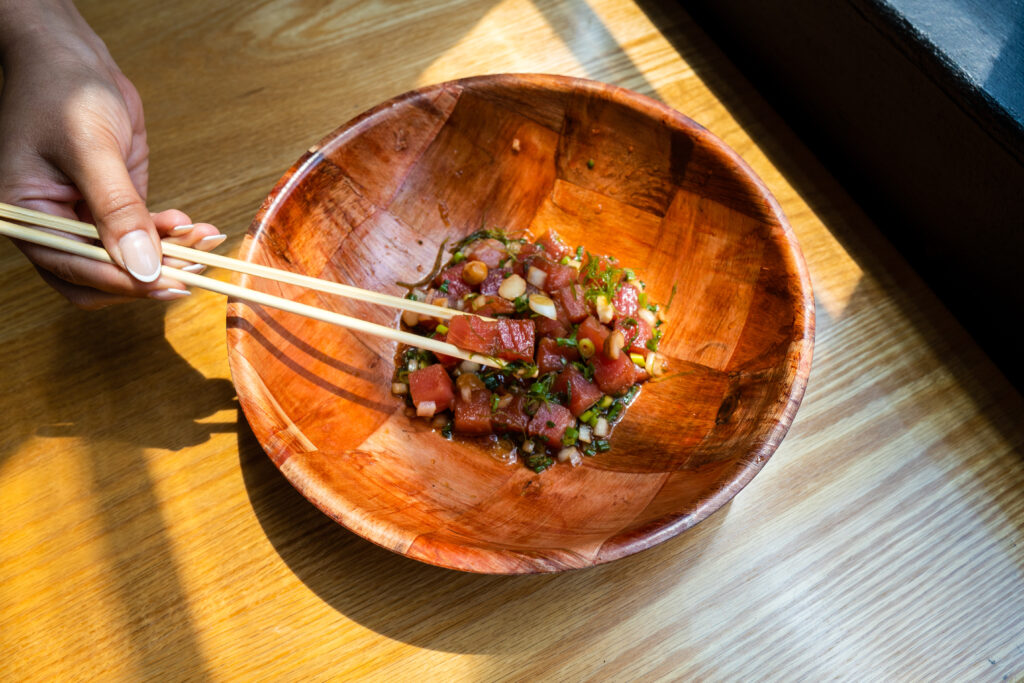 Desserts include a Valrhona white chocolate butter mochi, a sweet rice flour confection and Sapporo beer-infused soft serve for a grown-up treat. The showstopper is an Orange Bang Shave Ice, where fluffy shards of ice–the thin shavings allow for the flavored syrups to be better absorbed–cover a condensed milk espuma dotted with candied orange slices. It’s the only way to do summer. 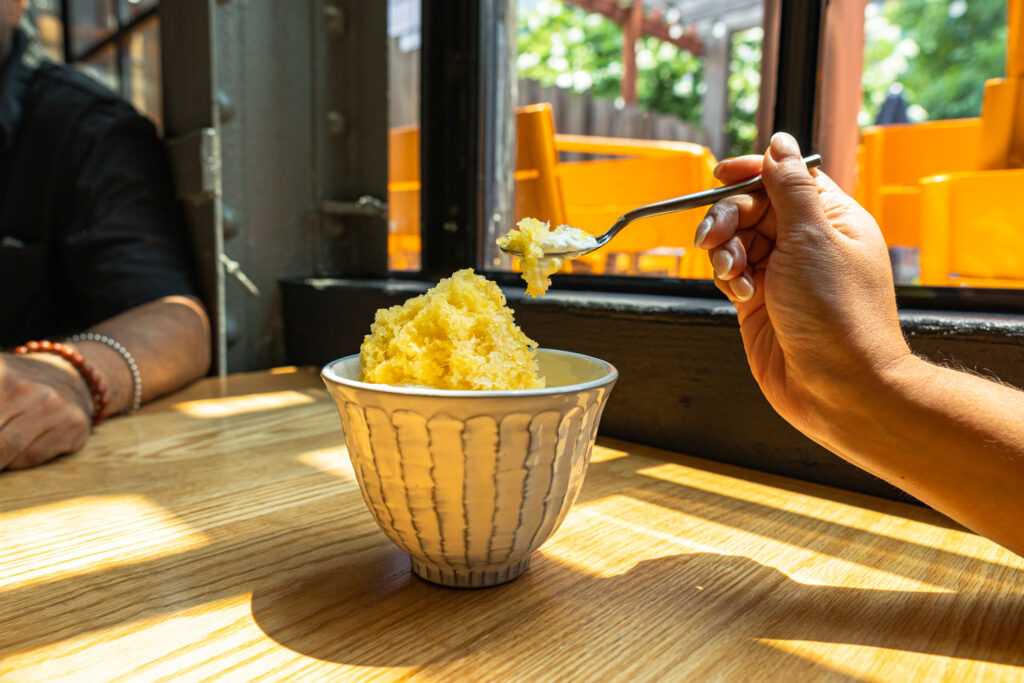 Nalee Kim designed a seasonal drink menu inspired by the native fruits of Hawaii. Cocktails include a draft Mai Tai based on Honolulu’s Royal Hawaiian version; Nani Spice with rum, brandy, guava and housemade five-spice bitters; and Pau Hana, which translates to “work is finished” in Hawiian with vodka, shochu, elderflower liqueur and guava.

“I always wanted to do a Hawaiian restaurant. It’s in my roots,” says Fukushima, whose dad is a third-generation Hawaiian with Japanese ancestry. Fukushima’s parents met in Okinawa, Japan where his dad was stationed, and where Fukushima was born; his mother is from Miyako Island, Japan.
The family moved to Hawaii, also known as The Big Island, where they lived from when Fukushima was ages four to five. He visited often throughout the years, though, remembering family meals, a mix of Japanese flavors and Hawiian ingredients. “Many of the dishes were inspired by my earliest memories from life in Okinawa to Hawaii, and jumping from country to country, as is the typical life of an Army brat.”

Fukushima is one of the region’s most celebrated chefs who rose to fame growing Jose Andres’ restaurant empire (during his time at Think Food Group, he helped open Cafe Atlantico, minibar, Oyamel, Zaytinya and Jaleo’s suburban outposts). Internationally, he worked a season at the famed el Bulli in Spain.

Fukushima studied mathematics and art at the University of Maryland before deciding to pursue a life working in the hospitality industry and graduating from L’Academie de Cuisine.