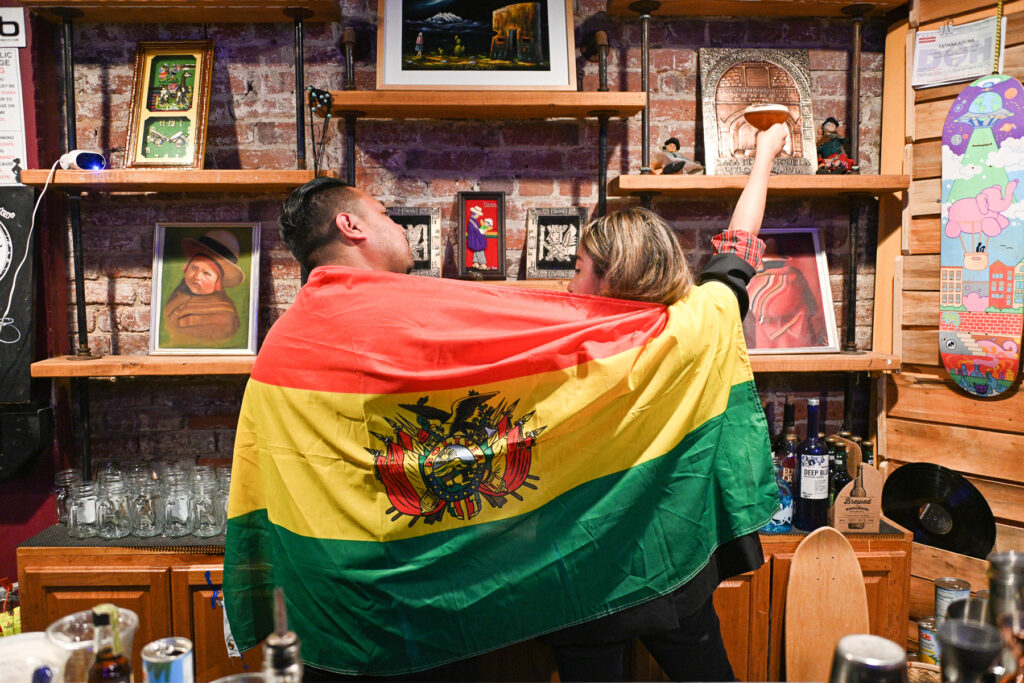 “Come celebrate día de La Paz with us this Friday 07/16 at 7pm. We’ll have DJ @urdjsfavdj_ spinning all of your favorite Bolivian hits, cumbia villera, 90s’s hip hop and reggaeton! We’ll also have Cholitas walking around for you to admire and take photos we encourage our comadres to show up with braids to honor the beautiful chola paceña! Our mixologist @luivindc will be introducing a new cocktail to honor La Paz named “Collita.”

“Sibling duo, Carla and Juan Sanchez introduce Washington D.C. to their Bolivian heritage with Casa Kantuta, a pop-up experience inspired by their upbringing in the Bolivian capital city of La Paz.

Casa Kantuta is a cultural immersive environment inspired by the Bolivian way of life. It is the brainchild of the Sanchez duo, both of whom immigrated from Bolivia to the Washington D.C. area in the 1990s. Memories of salteñas, a Bolivian street food similar to empanadas, and vibrant celebrations back home collide with the cultural aspects of their formative years spent in the United States to bring this unique pop-up concept to Adams Morgan. They’ve tapped fellow Bolivians and other immigrant and BIPOC-owned businesses to create an inclusive space in the lower level of sPACEYcLOUD, the only woman-owned skate shop and vegetarian restaurant space in the United States, for gathering, eating, drinking and shopping.

“I am very excited and honored to provide a market space for Carla and her team to incubate their business concept and bring Bolivian street cuisine to Washington D.C.,” says Tati Kolina owner of sPACEYcLOUD.

Thursday-Sunday from 7pm-2am, guests will be transported to a modern speakeasy done Bolivian style when entering Casa Kantuta. Carla will transform sPACEYcLOUD’s lower level over the next few weeks, documenting the process on @casakantuta as she has done with other spaces on her personal blog, @spicycandydc. The spirit of La Paz is represented in the details of the decor; like the strategically placed ekekos, small, mustached ceramic figurines that represent luck and prosperity, and cholita accessories like bowler hats, as well as gold accents throughout that are a nod to Bolivian mines. The private outdoor patio is an homage to Juan and Carla’s beloved Nana, Petrona, and her love for roses.

“I’m putting my heart and soul into this project,” says Carla. “And my hope is that the D.C. community embraces and admires my culture the way my brother and I do! From Bolivia with lots of love.”

The soundtrack for Casa Kantuta is an eclectic mix of music that inspired Juan and Carla as they grew into the thriving young entrepreneurs that they are today: 90s hip-hop and R&B, a nod to the siblings’ first few years in the United States, Bolivian music, Reggaeton and Cumbia Villera, a subgenre of Cumbia music that highlights rhythm and folk-dance traditions of Latin America.

To further enhance the Casa Kantuta experience, Luis Aliaga, who is half Bolivian and known to many as Beverage Director at Roy Boys, has created a menu of Bolivian craft cocktails some of which include Rujero Singani, a beautiful small-batched brandy made with 200-year-old grape vines and one of Bolivia’s most famous exports. Each cocktail featured is consumed across the country and each name offers guests a bit of Bolivian history. For example, the Pachamama, named for the goddess who in Inca mythology is revered as an “Earth Mother” and fertility goddess, is a drink presenting more earthy ingredients like cinnamon bark syrup.

Saturdays and Sundays from 11am-3pm, Casa Kantuta operates as a mercadito (or market) featuring local artists, designers, vintage shops and small business owners of the BIPOC community including Sarah Christie (Bolivian designer), Spoken Spanglish, SunGods and more. Sundays will also feature salteñadas (Bolivian style brunch) from 11am to 3pm, with salteñas from Maria Helena of Saya, who also hails from Bolivia. Salteñas are an authentic handmade Bolivian street food made in a subtly sweet, tender shell that encases a rich, savory stew filled with meltingly soft potatoes, olives, egg, Andean spices and chicken or beef, if preferred.

Casa Kantuta debuts Thursday, July 8 at sPACEYcLOUD, located at 2309 18th Street NW. Hours of operation are as follows: Thursday-Sunday from 7pm-2am for bar service only and Saturday-Sunday from 11am-3pm for mercadito and brunch.“