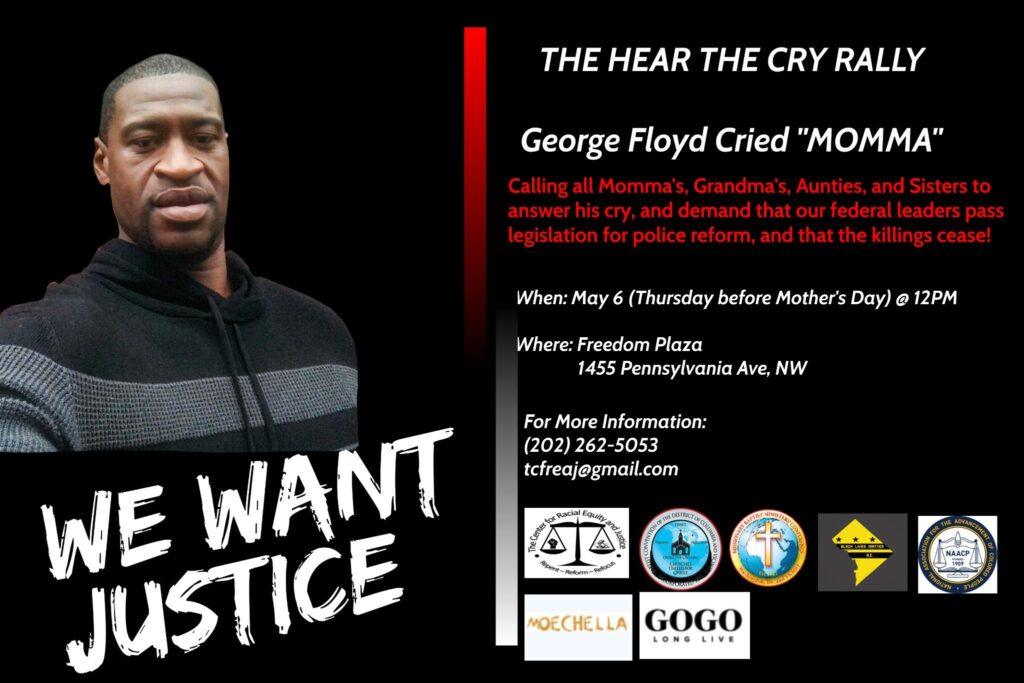 “Rev. George Gilbert and The Center for Racial Equity and Justice are calling for immediate action on policing. This Thursday May 6, 2021 (the Thursday before Mother’s Day) at 12PM they are calling for 1,000 mothers, grandmothers, and women on the frontlines affected by police terror to join the Hear the Cry Rally. They are coming together at Freedom Plaza to answer George Floyd’s cry for “Momma!” and demand that the President, Congress, and Senate act swiftly to address policing in America.

While many celebrated the guilty verdict of Derek Chauvin in the murder of George Floyd we must remember that the fight is not against any one officer, police department, or police chief it is about the racist and violent system of policing. Police terror and murder have not slowed or stopped since the verdict was read.”

From The Center for Racial Equity and Justice:

HEAR THE CRY FOR JUSTICE!

“If you are silent about your pain, they’ll kill you and say you enjoyed it.” – Zora Neale Hurston

For 400 years black people, mothers and women in particular have cried out with a loud voice, demanding justice. For 400 years the pendulum of equality appears to have swung slightly as a woman of color holds the highest position in the nation as Vice President, and a police officer was convicted of murder – for the first time ever in Minnesota – for the death of George Floyd. National reckoning is powerful, and necessary, and we commend the efforts of the Biden Administration who has committed to criminal justice reform.

But a movement gets its momentum at the local level. Always. Here, the District, arguably the most prominent and powerful city in the nation because of its proximity to the White House, nexus and partnerships with the federal government and progressive legislative body. Yet, with all of that good stuff going on we are a city that have suffered tremendous loss. None can speak more to that than mothers who have lost their children to police brutality. Not from centuries ago, recently.

So we gather with a the sound of a War Cry! We gather in full support of these mothers. We do it with our voices and we do it with our demands. Specifically, we call on our federal and locals leaders to pass the following legislation:

We further demand that the Council officially adopt the day before Mother’s Day as the Mother’s Movement: a day for mother’s whose children were victims of police brutality to be officially recognized by the District government.

We further Demand that Mayor Bowser fully fund the NEAR Act recognizing that the Office of Neighborhood Engagement (ONSE) is a critical component to changing the trajectory of how police handle mental health service calls which can lead to a change of the police culture.”