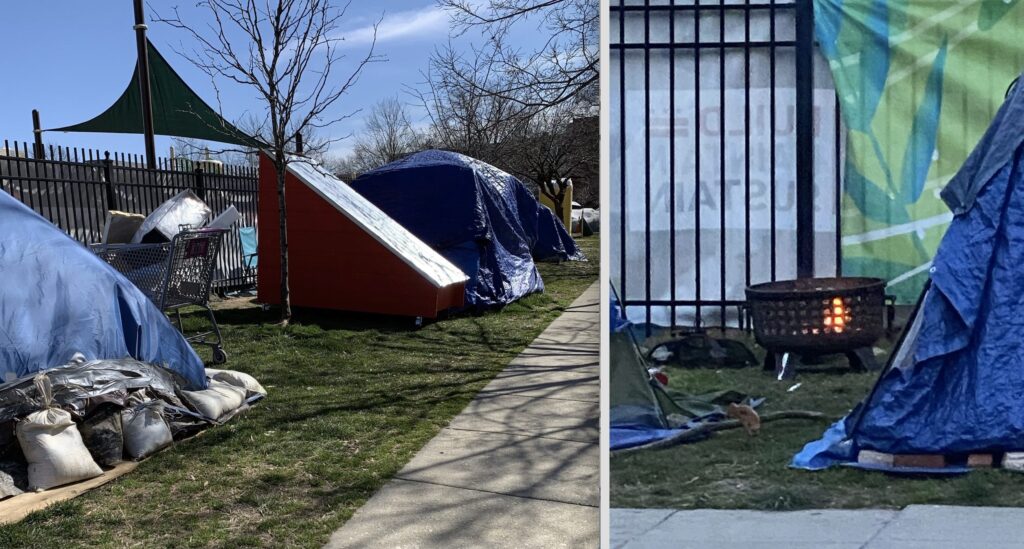 A homeless person camped next to our kids’ school was recently arrested for “charges including assault with a dangerous weapon, carrying a pistol without a license, possession of a large capacity Ammunition Feeding Device, possession of Unregistered Ammunition, and receiving Stolen Property.” I feel for the remaining inhabitants, but it seems like it’s time for residents of this encampment to go somewhere where they are not harassing elementary school students, as potential dangers to students now seem to outweigh COVID risks. Do readers have any suggestions for getting District leaders to listen to and act on our concerns?”

Readers pass on a letter to the Seaton Community:

Over the course of the last year the homeless encampment on 10th Street along the Seaton playground fence has been growing. The encampment started prior to the pandemic with one resident and has now grown to more than 12 structures.

In the course of regular conversations with the residents of the encampment, one resident recently informed us that another resident was arrested on April 11 (at 6th and Q NW) for charges including assault with a dangerous weapon, carrying a pistol without a license, possession of a large capacity Ammunition Feeding Device, possession of Unregistered Ammunition, and receiving Stolen Property (information on the arrest is available here). We were told that the arrested individual had been keeping the gun at the encampment, in their tent, next to the Seaton Elementary School playground. Officials from DCPS (including Chancellor Lewis Ferebee and Chief Operating Officer Patrick Davis), the Mayor’s Office, and Councilman Charles Allen’s office were notified of this development last week. So far the only response has been the letter you recently received from Seaton.

Community members have spent the last year engaging with city officials, the Mayor’s office, DCPS, and the Seaton administration and PTO to request services and assistance for the unhoused residents of the encampment and to improve the conditions at the encampment. They have been in touch with organizations including Miriam’s Kitchen and Bread for the City and representatives from those organizations and the Mayor’s Office have regularly engaged residents. Residents have been offered spaces in shelters for more permanent housing, but the unhoused residents have not accepted.

Despite having worked with every possible resource and agency to find practical, win-win solutions that would work for all the members of the neighborhood, recent events have raised the level of concern about the effect of the encampment on the health and safety of the Seaton community. The City previously responded to community voices by conducting a clean-up in mid-March, asking residents to move their belongings 3 feet from the fence, and installing a mesh fabric barrier on both sides of the fence. However, as events since then have demonstrated, these measures are ineffective and insufficient to protect the students, staff, and parents of Seaton Elementary School.

The proximity of the encampment, its residents and their property, to both the playground and the area used for student pick-up make compliance with CDC, DC, and DCPS mandated COVID protocols difficult, if not impossible. Additionally, the police have responded to the encampment multiple times to address domestic disturbances, open fires, drinking, and drug use in sight of the playground, and a police officer is now present for pick-up because residents of the encampment have harassed students and parents.

DCPS officials have said that they cannot do anything more to address the situation because the encampment sits on city rather than DCPS property, and the city has said that they will not move or clear the encampment as that practice has been suspended according to CDC recommendations during the pandemic.

While we have tremendous empathy for the residents of the encampment, especially after having engaged with them as neighbors over the past year and having done everything we can think of to find a solution that is sustainable over the long-term for all involved, the recent developments have cemented concerns about the effect of the encampment on the health and safety of the Seaton community and made it clear that is only a matter of time before something happens to a member of the community. We are concerned that something will happen to one of the children who attends Seaton and/or uses its outdoor space.

After speaking with members of the PTO executive board, we are sharing this information with the Seaton Community so that everyone is at least aware of the ongoing situation. If you have concerns about the safety of those at Seaton Elementary, you should consider asking the city and DCPS to remove the encampment (while providing residents with help moving their tents and continuing to offer spots in shelters and assistance finding more permanent housing), make the land on which it sits DCPS property, and incorporate it with the rest of the Seaton outdoor space by moving the fence out to the sidewalk.

We are sharing this information because we feel that it is important that every parent of a student at Seaton is aware of the situation. The community has tried every avenue to address the safety concerns posed by the encampment. Based on the experiences of the past year, it is unsafe for an encampment to be located in such close proximity to a school. It is also clear that the leadership in DCPS, the Mayor’s Office, and the City Council consider the status quo situation acceptable and have no intention of changing policy.”