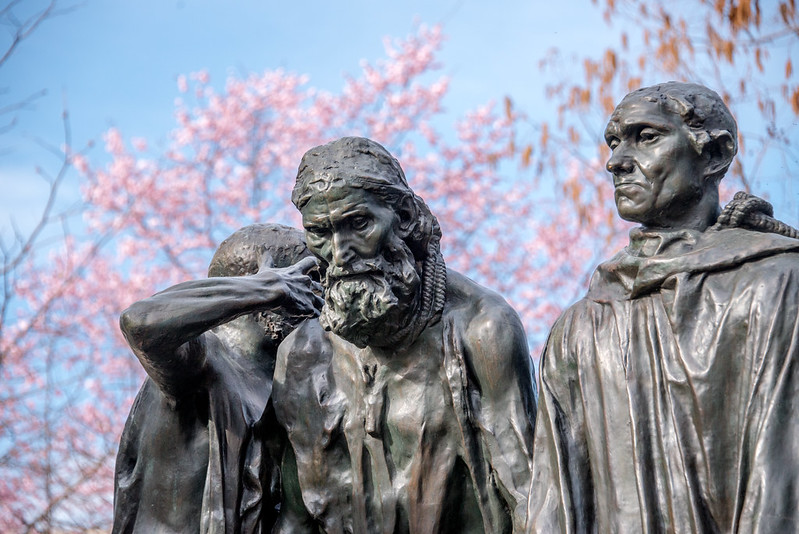 Early Saturday evening I was in my office, which overlooks our driveway out back. I saw a car parked back there for quite a while (around 10 minutes or so), next to our car, and wondered what was going on. We were expecting someone to come by shortly and park in the driveway. Our driveway is the only parking in this alley, which dead ends just next to the two parking spots. This is a long way of saying that other than routine work from the apartment complex next door or the occasional person who walks back there not knowing it dead ends, there is no reason to be back there and certainly no reason for someone to be parked on our driveway for an extended period of time. (If they needed to be in the alley for some reason, they could park in plenty of other places).

I saw a man and woman we don’t know get in and out of the car so I walked out back to see what was happening, to let them know we were home, and to ask them to get off of our driveway. When I opened the gate

I saw that they were having sex in the backseat. I yelled at them but they must not have heard me because they took their time. (I had a mask on and was also shocked and saw more than I wanted to see, so I didn’t want to see any more). We found used condoms on our driveway previously and wondered if they had blown in from somewhere else or it was a one-off when we were gone.

I was shocked but wasn’t able to do much because I didn’t know if they might react dangerously if confronted mid-act. (I saw much more than I am comfortable repeating, but they were obviously sneaking around and chose our driveway for the relative privacy given from our neighbor’s fence). Not knowing what else to do, I called the police, primarily to ask for advice, should it occur again and to see if they had suggestions for deterrent methods. The officer was nice but arrived after they left. He ran plates but can’t do much else. He pointed out that it may be a place a prostitute brings Johns, particularly if we had seen evidence before.

I would love advice as for what I can do to prevent this in the future. We planned to install motion-activated lights when we found the condoms out back, but they did this in broad daylight. We will hang signs and work to block our unoccupied parking space when not in use. I’d appreciate any suggestions or advice based on similar experiences. It was one thing when we found used condoms and had to try and keep our dog (and ourselves) from going near them, but walking onto my driveway to see two strangers having sex in a car leaves me, as a female, feeling unsafe and very uncomfortable. I’m concerned that if I approach people doing this again, they might react violently or otherwise cause harm to our dog, car, or house. I don’t think calling the police is particularly helpful (despite the officer telling me it was the right thing to do and that I should call again next time), but want to feel like I can do more to keep this off of my driveway and prevent the situation from escalating.

Any advice is much appreciated.”