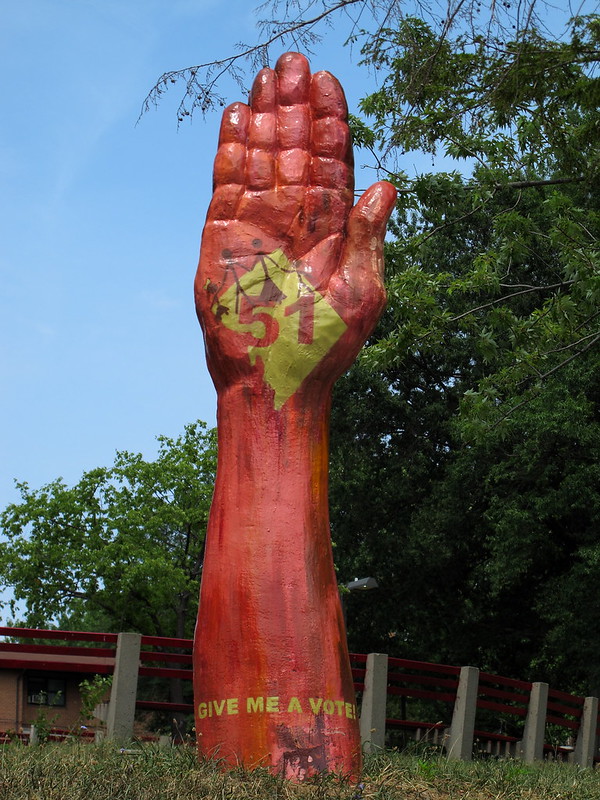 “Today, Mayor Muriel Bowser testifies before the House Oversight and Reform Committee at a hearing on the Washington, D.C. Admission Act (H.R. 51).

Chairman Maloney, Ranking Member Comer, and members of this esteemed Committee, on behalf of the 712,000 residents of the District of Columbia, I thank you for convening this hearing on H.R. 51, the Washington, D.C. Admission Act. In particular, we thank you for shepherding this measure to passage during the 116th Congress; and we respectfully seek your support to marshal it to passage again.

I want to especially thank our Congresswoman, Eleanor Holmes Norton, who has championed equality for Washington, DC throughout her tenure, while skillfully delivering jobs, opportunity, and greater self-determination.

I am Muriel Bowser, Mayor of Washington, DC, and I am honored to come before this committee to ask Congress to right the wrong that happened some 220 years ago when the residents of the District of Columbia were stripped of their full congressional representation.

Two years ago, in the 116th Congress, I came before this committee under the leadership of the late Elijah Cummings to dispel erroneous arguments, against DC Statehood. These are the bad-faith arguments we hear time and time again:

They say Washington, DC statehood is unconstitutional, even though several constitutional experts have repeatedly declared that to be false. Article I of the Constitution is not an obstacle because, as H.R. 51 makes clear a “federal district” will remain for the federal government, its buildings and its workings; and the rest of the area, where people live, will become the separate state.

They say Washington, DC is too small, or our economy is not diverse enough. Even though we’re bigger by population than two states and pay more federal taxes per capita than any state, and we pay more total federal taxes than 22 states.

They say that Washington, DC is badly governed. This is simply not accurate. In fact, by many objective measures DC is better governed than most states. We have balanced our budget 25 times in the last 25 years. And we already operate as a state and perform the same functions that states do. During the coronavirus pandemic, we have led COVID-19 testing, contact tracing and vaccination efforts, just as states do.

Again, two years ago we debunked those claims as thinly veiled attacks on our political leanings, and quite frankly our diversity, and history of black political power.

Today, I come to urge this committee and this Congress to move beyond the tired, non-factual anti-DC Statehood rhetoric and extend full democracy to the residents of the District of Columbia as the founding fathers intended. I was born in Washington, DC and generations of my family – through no choice of our own – have been denied the fundamental right promised to all Americans: the right to full representation in the Congress. The simple fact is, denying American citizens a vote in the body that taxes them goes against the founding principles of this great nation.

The disenfranchisement of Washingtonians is one of the remaining glaring civil rights issues of our time. Even as the Constitution was being drafted, several members foresaw the situation that Washingtonians face today, a capital city of second-class citizens. When white residents were the only population to be affected, as they were the only ones with suffrage at the time, the founding fathers pledged to correct the wrong, and the Continental Congress was eager to offer amendments to correct it. But ultimately, the Constitution did not resolve the concerns around the future federal district’s congressional representation or self-governance.

Why did the motivation to right the wrong disappear? As time passed, and the District became majority African American, the drive to correct the wrong was replaced by racist efforts to subvert a growing and thriving majority Black city. Historic records are replete with statements of successive members of Congress referencing the “negro problem” and the “color problem” within DC as a justification to withhold Congressional representation. This was their way of saying that African Americans are unable to govern themselves, or vote for their best interests, and should therefore be denied political power and suffrage. So, does this body still believe that to be the case?

Next month, we will celebrate President Lincoln signing the Emancipation Act that freed the slaves in the District of Columbia on April 16, 1862, months before the Emancipation Proclamation freed other enslaved people. I hope to remind this Congress that District residents are still not free, as we remain disenfranchised in this body.

I urge all of you to do what our founding fathers and over two centuries of lawmakers failed to correct and grant full democracy to DC residents through statehood by enacting H.R. 51. The incremental enfranchisement of the District has historically been a bipartisan effort but is in no way a substitute for full representation in Congress.

Washington, DC has been a true partner to the federal government in every possible aspect even though Congress and the Presidents have been sporadic partners to us. We have supported continuing the critical operations of this body and other federal agencies within our borders. The federal government leaned on our health departments to process coronavirus tests and administer vaccines to federal employees and contractors. However, several provisions of federal aid to respond to the coronavirus pandemic denied us state-level funding, shortchanging us over $755 million in fiscal relief even though we operate as a city, county, and state. We now thank you Madam Chair, Speaker Pelosi, Leader Schumer, your democratic colleagues, and President Biden for righting that wrong last week in the American Rescue Plan.

The events of January 6th, where Congress was overtaken by insurrectionist mobs, show that Congress need not fear the new state of Washington, DC as it does not currently fear the states of Maryland and Virginia. Rather, the new state will be a necessary partner to securing the federal interests, not a detractor. Arguing that Washingtonians must remain disenfranchised to protect the interests of the federal government is dangerous, laughable, and downright insulting.

In conclusion, after years of disinvestment and disinterest when Congress did exercise full exclusive jurisdiction over the District and ran all local governance, my predecessors and I, with Council Chairman Phil Mendelson and his colleagues and their predecessors, have worked hard to develop the fastest improving urban schools, invest in housing, healthcare facilities, recreational facilities, as well as a sports and entertainment economy, and built one of the most attractive meeting destinations in the country. We have proven our sound leadership and that there is no reason not to right this 220-year-old wrong.

Thank you again for allowing me to appear before the committee today and I look forward to answering your questions.”

“Congresswoman Eleanor Holmes Norton (D-DC) released her opening statement, as prepared for delivery, from today’s Committee on Oversight and Reform hearing on her District of Columbia statehood bill.

Chairwoman Maloney, along with the residents of the District of Columbia, I greatly appreciate and thank you for this hearing today. This has been a historic year for D.C. statehood. I introduced H.R. 51 with a record 202 original cosponsors. Today, the bill has 215 cosponsors, which virtually guarantees passage in the House, even with cosponsors alone. The Senate version, S. 51, was introduced with a record 38 original cosponsors and now has 41 cosponsors. We are particularly grateful to our Senate sponsor, Senator Tom Carper, who gathered the largest number of original cosponsors ever. When the House passed the D.C. statehood bill last Congress, it was the first time in history a chamber of Congress had passed the bill. With Democrats controlling the House, the Senate and the White House, we have never been closer to statehood.

Under H.R. 51, the State of Washington, D.C. would consist of 66 of the 68 square miles of the present-day federal district. The reduced federal district, over which Congress would retain plenary authority, would be two square miles and consist of the Washington that Members of Congress and visitors associate with the nation’s capital, including the U.S. Capitol complex, the White House, the Supreme Court, the principal federal monuments and the National Mall. It would be called the Capital.

H.R. 51 has both the facts and the Constitution on its side. The Constitution does not establish any prerequisites for new states, but Congress generally has considered a prospective state’s population and resources, support for statehood and commitment to democracy.

D.C.’s population of 712,000 is larger than that of two states and the State of Washington, D.C. would be one of seven states with a population under one million. D.C. pays more federal taxes per capita than any state and pays more federal taxes than 21 states. D.C.’s budget is larger than those of 12 states. Eighty-six percent of D.C. residents voted for statehood in 2016. In fact, D.C. residents have been petitioning for voting rights in Congress and local autonomy for 220 years.

D.C. residents have fought in every American war, including the war that led to the creation of the nation, the Revolutionary War. The servicemembers from our nation’s capital have helped get voting rights for people throughout the world, but continue to come home without those same rights or even the same rights of those with whom they served.

My own family has lived through almost 200 years of change in D.C. since my great-grandfather Richard Holmes, as a slave, walked away from a plantation in Virginia and made his way to D.C. Today, it is my great honor to serve in the city where my family has lived without equal representation for almost two centuries.

Congress can no longer allow D.C. residents to be sidelined in the democratic process, watching as Congress votes on matters that affect the nation with no say of their own, or watching as Congress votes to overturn the laws of the duly elected D.C. Council with no say of their own. Full democracy requires much more. D.C. residents deserve full voting representation in the Senate and the House and complete control over their local affairs. They deserve statehood.

Congress has two choices. It can continue to exercise undemocratic, autocratic authority over the American citizens who reside in our nation’s capital, treating them, in the words of Frederick Douglass, as “aliens, not citizens, but subjects.” Or it can live up to this nation’s promise and ideals, end taxation without representation and pass H.R. 51.

Madam Chairwoman, thank you again for your leadership on D.C. equality.”

More Stories
“Someone crashed into the lobby of the Drake on 17th and Mass and drove away”Buying a Home? What’s an Escalation Clause?