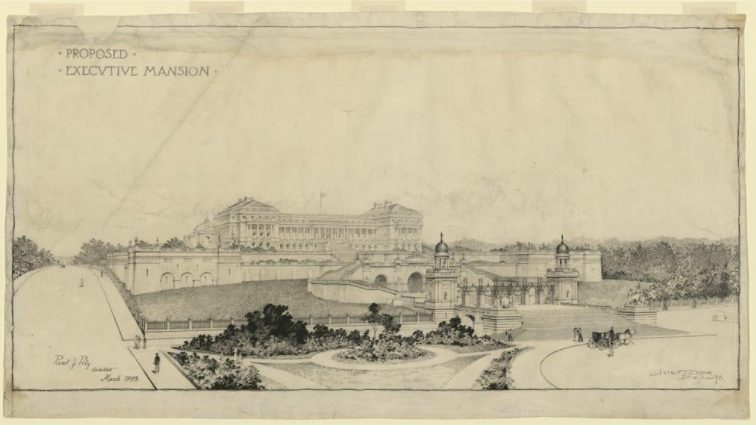 I keep forgetting to post this bit of awesome from The White House Historical Association:

“It’s hard to imagine the White House at any address other than 1600 Pennsylvania Avenue NW–but at the turn of the twentieth century, Washington, D.C. socialite and activist Mary Foote Henderson proposed a new home for the president.

Mary Foote Henderson was the wife of Missouri Senator John B. Henderson. She proudly supported women’s suffrage and temperance and was a highly active hostess for upper-class Washingtonians. The couple was extraordinarily wealthy and built a massive Gilded Age mansion on 16th Street, sometimes called “Boundary Castle.” Meanwhile, Mrs. Henderson hoped that she and her husband would soon welcome a prestigious neighbor–the president!

Aware that the Executive Mansion was too small for the first family, Mrs. Henderson worked with architects Paul J. Pelz and Jules T. Crow to propose the construction of a large mansion for the chief executive atop Meridian Hill in 1898. The rendering seen today shows the palatial building proposal, which boasted a grand entrance, massive residence, and expansive grounds. It was approximately twenty blocks from the White House.

In many ways, the design was fit for a king rather than a president, and never came to fruition. Rather than constructing a new palace on Meridian Hill, additional office space in the form of the West Wing was added to the White House during the administration of President Theodore Roosevelt. The area near “Boundary Castle” instead became Meridian Hill/Malcolm X Park.“