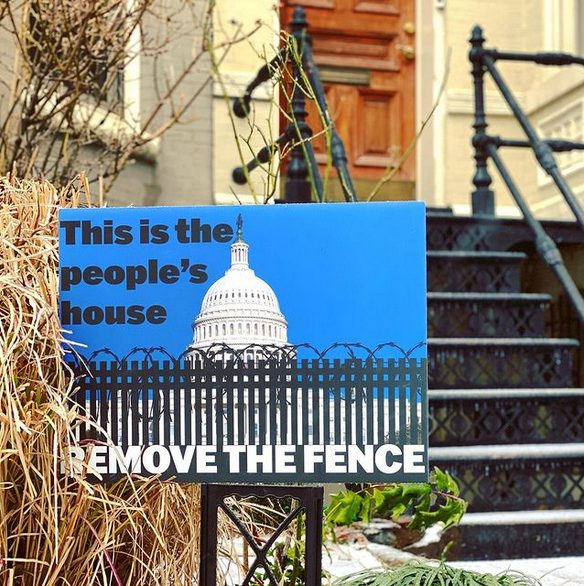 “Today a bipartisan letter organized by Demand Progress and the Lincoln Network and signed by 20 organizations was sent to congressional leaders urging them to reject any proposal to permanently maintain fencing around the U.S. Capitol and nearby areas. This letter comes after the statement from Acting U.S. Capitol Police Chief Yogananda Pittman that the U.S. Capitol Complex should be fitted with permanent fencing. While placing temporary fencing may be necessary at times, constructing permanent barriers around the heart of our legislature would deal a significant blow to the transparency and accessibility of our government.

“The U.S. Capitol must be secure and it must be open to the public,” said Daniel Schuman, policy director, Demand Progress. “We oppose permanent fences around the U.S. Capitol because their presence is inimical to open government and they are merely security theater when the real security failures arose from mismanagement and a lack of preparation from the Capitol Police leadership and the Capitol Police Board.”

“Security that does not provide actual safety is dangerous because it can create a lackadaisical environment among the public and law enforcement professionals,” Arthur Rizer, Vice President for Tech, Justice, and Liberty at the Lincoln Network. “Further, optics are critical here; this is our nation’s capital–home of the brave, land of the free. Do we really want to put off an East Berlin vibe to our citizens and visitors?”

Congresswoman Eleanor Holmes Norton, who represents the District of Columbia, has been adamantly opposed to the permanent fencing proposal. Congresswoman Norton wrote a letter to the U.S. Capitol Police Board in strong opposition and recently introduced legislation to prohibit the installment of permanent fencing.

“I’ve introduced a bill to ban permanent fencing around the Capitol in the wake of the January 6th attacks, and am pleased by the bipartisan efforts from Demand Progress and the Lincoln Network urging Congress to reject proposals for permanent fencing or walls around the Capitol,” Congresswoman Eleanor Holmes Norton said. “We must ensure that D.C. residents — who live in the nation’s capital — have access to their own roads and walkways. We must not entrench distance between the American people and their own government by placing intimidating barriers between ourselves as public servants and the people we serve, especially when such barriers are neither effective nor necessary.”

You can read the full letter from Demand Progress, the Lincoln Network, and a coalition of organizations below:
February 15, 2021

RE: Keep Congress Open to the People

We write in firm opposition to the proposed enclosure of the U.S. Capitol with permanent security fencing. The Capitol and surrounding buildings must remain open to all engaged in the business of our democracy. Congress should be the shining city on the hill, welcoming to all, and a beacon to the world.

For every complex problem there is an answer that is clear, simple, and wrong. The insurrection of January 6, 2021, and the attendant failure to protect Congress, were not caused by the absence of permanent security fencing. They were the result of failures by those responsible for managing security for the U.S. Capitol. That should be the focus of efforts to protect Congress and those who serve therein.

There may be times when it is necessary to erect temporary security fencing, as in the recent inauguration, but that decision must be driven by a meaningful strategy to address an exigent threat that is part of a thoughtful, coordinated plan developed by a competent security authority. We must first do the hard work of understanding what went wrong and why, especially when proposed solutions come at the expense of our values.

Militarizing our Capitol is a sign of weakness and a hallmark of authoritarian countries. It is an overreaction based upon a miscalculation of how to address the dangers we face. We must do better.

* Affiliations listed for identification purposes only.

Read more →
More Stories
Was that a Cannon you heard around 7am on a Tuesday Morning? Vol. 8Today* in Hawks* around Town – Fox!