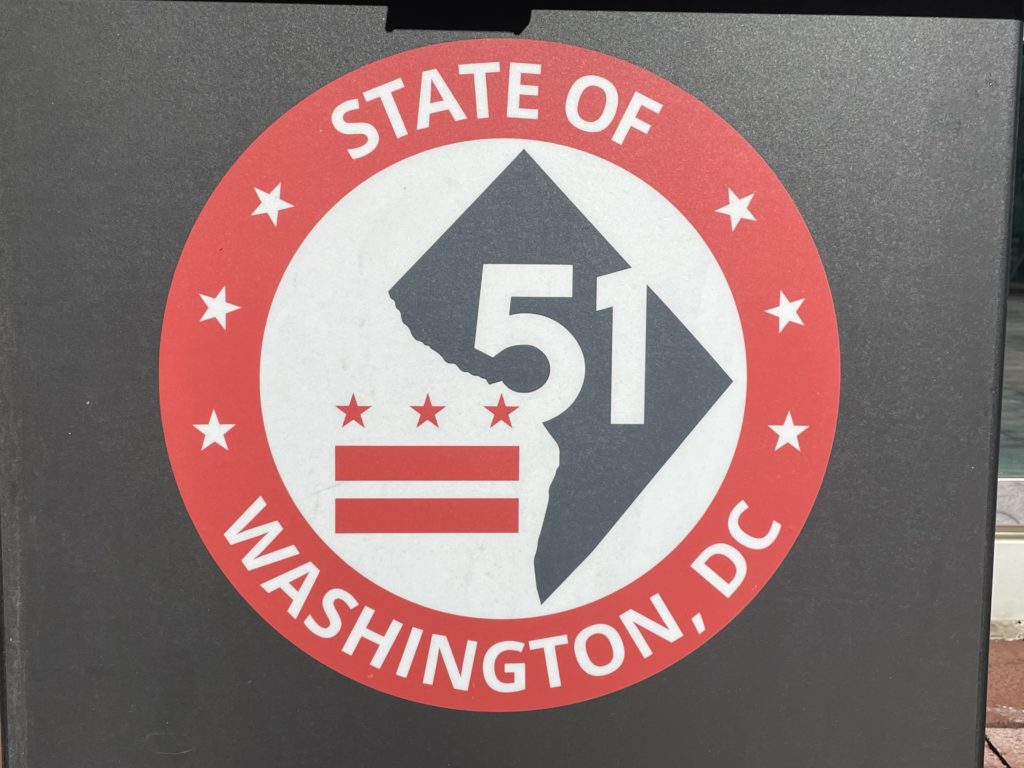 “U.S. Senator Tom Carper (D-Del.), a senior member of the Homeland Security and Governmental Affairs Committee (HSGAC), is, once again, leading a group of Democratic senators in re-introducing legislation to grant Washington, D.C. statehood. The bill, which Senator Carper first introduced in 2013, would make Washington, D.C. the 51st state, finally give its citizens full representation in Congress, and also ensure that the citizens and elected leaders of the District of Columbia have full authority overlocal affairs, including crucial safety and security matters. The Washington, D.C. Admission Act (S.51) would also designate the areas surrounding the White House, the Capitol, the Supreme Court, and the National Mall as the seat of the federal government. That area would inherit the name the “Capital” and remain under the control of Congress, as mandated by the Constitution.

“Our nation’s capital is home to more than 700,000 Americans who, despite our nation’s founding mantra — ‘no taxation without representation’ — pay their share of taxes without full voting representation in either chamber of Congress. In fact, despite paying more in federal taxes per capita than citizens of any of the 50 states, D.C. residents have no say in how those taxes are actually spent. This isn’t a Republican or Democratic issue; it’s an American issue because the lack of fair representation for D.C. residents is clearly inconsistent with the values on which this country was founded. It is therefore incumbent upon all of us who enjoy the right and the privilege of full voting rights and representation to take up the cause of our fellow citizens in the District of Columbia. We must use our voices to call out this historic injustice and right this wrong. I am hopeful that we can finally come together to do just that this Congress,” said Senator Carper. “I want to thank Congresswoman Norton and Mayor Bowser for their steadfast leadership and partnership on this issue. I’m proud to be introducing this bill this Congress with the highest number of original cosponsors we have ever received and with the support of all the Senators who represent the communities that make up the greater Washington metro area in Maryland and Virginia.”

In June 2020, federal agents and the U.S. military were deployed against Americans exercising their constitutional right to peacefully protest in the District of Columbia, specifically in Lafayette Square just north of the White House. And on January 6, 2021, when violent rioters stormed the U.S. Capitol, it took hours to approve National Guard mobilization. There are 54 units that make up the National Guard: one for each state plus Guam, Puerto Rico, the U.S. Virgin Islands and the District of Columbia. However, of those 54 units, only the D.C. National Guard doesn’t fall under local control. Instead, the order to mobilize the D.C. National Guard must to come from the White House, rather than the head of D.C. government.

“We are deeply indebted to Senator Carper for his unending efforts for D.C. statehood and his priority in reintroducing the Senate companion to our D.C. statehood bill this year with a record number of original  cosponsors,” Congresswoman Norton said. “There’s never been a time when statehood for the District was more likely. After the historic passage of the D.C. statehood bill in the House last June and reintroduction in the House this year with a record 202 original cosponsors, and now with Senator Carper’s reintroduction of the Senate companion bill with a new record number of original cosponsors, we’re ready to achieve voting representation and full local self-government for the 712,000+ residents of the District of Columbia. In addition to Senator Carper’s good news, Speaker Pelosi and Leader Hoyer have already committed to bringing the D.C. statehood bill to the House floor again this Congress. Democrats have the majority in the House and the Senate, and  President Joe Biden supports D.C. statehood. This is the time we can finally correct this historic injustice and give D.C. residents the same rights as other taxpaying Americans.”

“We thank Senator Carper for introducing the Washington, DC Admission Act in the early days of the new Congress,” said Washington, D.C. Mayor Muriel Bowser. “We know that DC statehood cannot wait. Generations of Washingtonians have been denied the right to participate in our democracy – to have their voices and votes heard in Congress, to help shape the future of our nation, and to have a say on Supreme Court justices, whose decisions affect every single person living in the United States. Starting with record support in the Senate, which we expect to grow under Senator Carper and Congresswoman Norton’s leadership, is a promising sign that our country is finally ready to right this historic wrong.”

“For far too long the people of the District of Columbia have been denied their right of self-governance and have faced taxation without representation. The need for urgent action has only been underscored by recent events– the Congress must stop trying to impose its will and substitute its judgment for the people of the District of Columbia. The people who reside in our Nation’s Capital must be given the same basic political rights afforded citizens in the fifty states –the right to send their representatives and senators to vote on their behalf in the House and Senate. We must grant the District statehood, now, and I’m committed to getting it done,” said Senator Van Hollen.

Last year, the companion bill to Senator Carper’s legislation, introduced in the House of Representatives by Congresswoman Eleanor Holmes Norton (D-D.C.), finally received a full vote in the House and passed by a vote of 232-180. District of Columbia residents have also voted overwhelmingly to petition the federal government to end this unjust situation by granting it statehood. A November 2016 referendum approved a name, constitution, and boundaries for what would become the new state called Washington, Douglass Commonwealth (D.C.)

Read more →
More Stories
January 26 Coronavirus Data Posted: 35,865Metro now has “the most connected wireless experiences of any rail system in the U.S. with coverage available in all tunnels.”