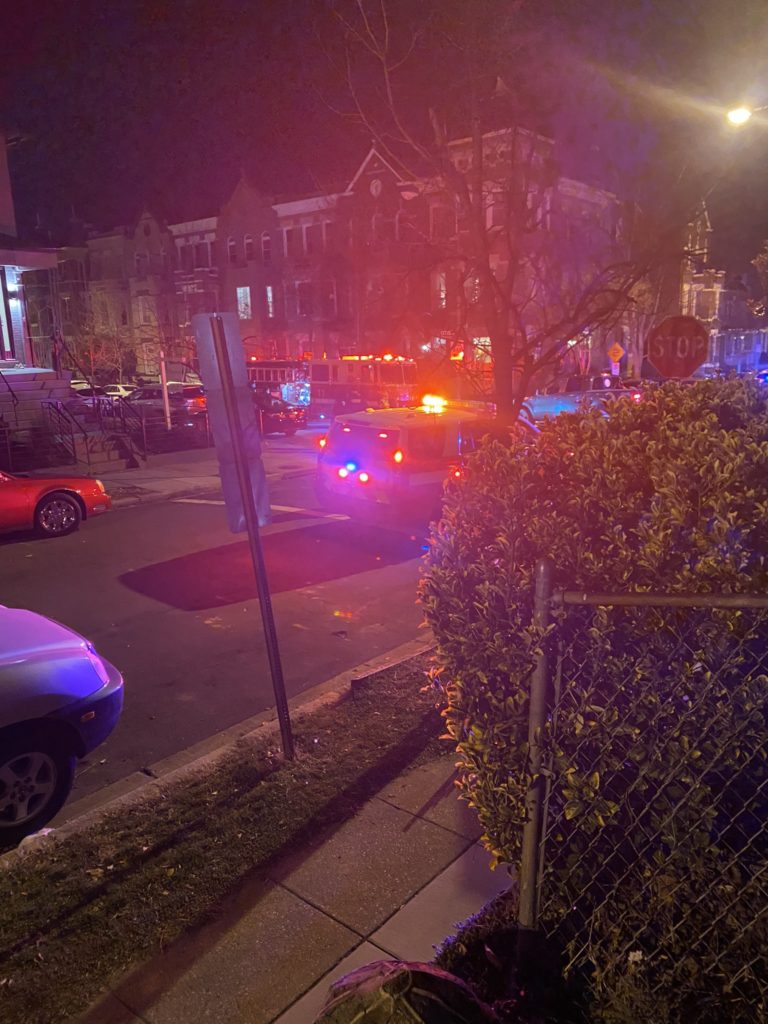 From MPD 7:46pm: “Alert: Shooting Investigation in the1000 Block of Otis Place NW. No lookout at this time”

From MPD: “On January 16, 2021, at approximately 7:22 pm, members of the Metropolitan Police Department responded to the 3500 block of 14th Street NW for a shooting. Once on the scene a victim was located with a one gunshot wound. The Victim was treated at a local hospital and the Fourth District Detective’s office is investigating the incident.

“Detectives from the Metropolitan Police Department’s Homicide Branch are investigating a homicide that occurred on Saturday, January 16, 2021, in the 3600 block of 11th Street, Northwest.

At approximately 9:26 pm, members of the Fourth District responded to the listed location for the sounds of gunshots. Upon arrival, members were advised that an adult male was seeking treatment at a local hospital for a gunshot wound. Despite all life-saving efforts, the victim succumbed to his injuries. The detectives’ investigation revealed that the victim was shot while inside of a vehicle at the listed location.

The decedent has been identified as 23 year-old Inmar Edenilson Arias Hernandez, of Northwest, DC.

If you have information regarding this incident, please contact the Metropolitan Police Department at 202-727-9099.

Readers reported: “Lots of shots fired in Columbia Heights tonight. Heard rapid fire of about 15-20 shots at 9:07, and a bunch more 10 mins later. Sounded like it was somewhere between 13th and 11th between Otis and Spring.”

From MPD: “On January 16, 2021, at approximately 9:15 pm, members of the Metropolitan Police Department were called for the report of an adult male brought to an area hospital suffering from one gunshot wound. As the investigation progressed, a crime scene was located in an alley located in the 3600 block of 11th Street, Northwest.

If you have information regarding this incident, please contact the Metropolitan Police Department at 202-727-9099.”

Around 1:30pm Saturday a reader reported: “gunfire between two vehicles near the Ft Totten area, driving through residential areas. They drove all throughout the northern part of Michigan Park. Definitely went by Delafield and 8th.”

From MPD: “On 1/16/21 at approximately 8:07 PM, officers from the First District received a call for a carjacking in the 900 block of Independence Ave SE. Officers responded to the scene and interviewed an adult female victim. The victim stated that she was getting out of her vehicle when a male suspect approached, pointed a handgun at her and took her vehicle. The vehicle, a dark blue Mazda CX3 with DC tags, was last seen traveling east on Independence Ave SE operated by a black male wearing all black clothing.

First District detectives are actively investigating this incident. Should any member of the public have information or video, please contact the First District Detectives office at (202) 299-2025, or the Metropolitan Police Department’s Command Information Center at (202) 727-9099.”

From MPD: “The Fourth District is investigating an attempted armed carjacking that occurred on January 16, 2021, at approximately 4:00 P.M. in the 600 Block of Irving Street NW. The suspects pulled in front of the victim in a black SUV. The adult female victim was removed from her vehicle as one suspect attempted to take her vehicle unsuccessfully, while a second female pointed a weapon at her. The suspects were unsuccessful and fled in the original black SUV operated by a third subject. The suspects are described as 1 Black Female 5’8 dark complexion 20-25 years old with long braids and wearing a black jacket. The second suspect is a Black Female, 5’2″, 18-20 years-old, dark complexion wearing a black coat. The driver of the dark SUV is described as a black male. Anyone with information or video is asked to contact DC Police at 202-727-9099 or text 50411.” 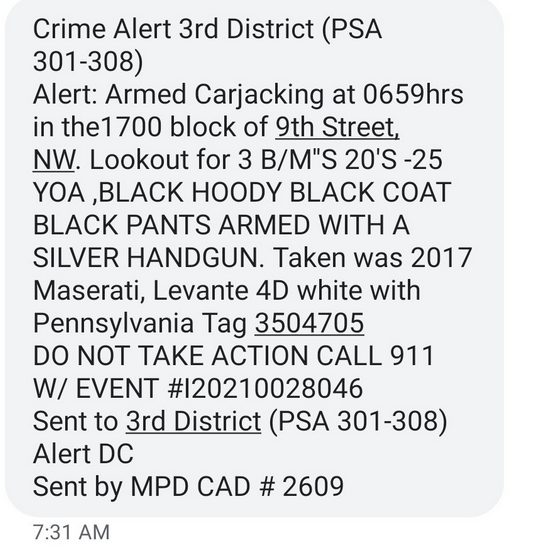 And Sunday morning not off to a good start, a reader sends: “Anyone else wake up to see that a Maserati was carjacked this AM? (see alert above)”