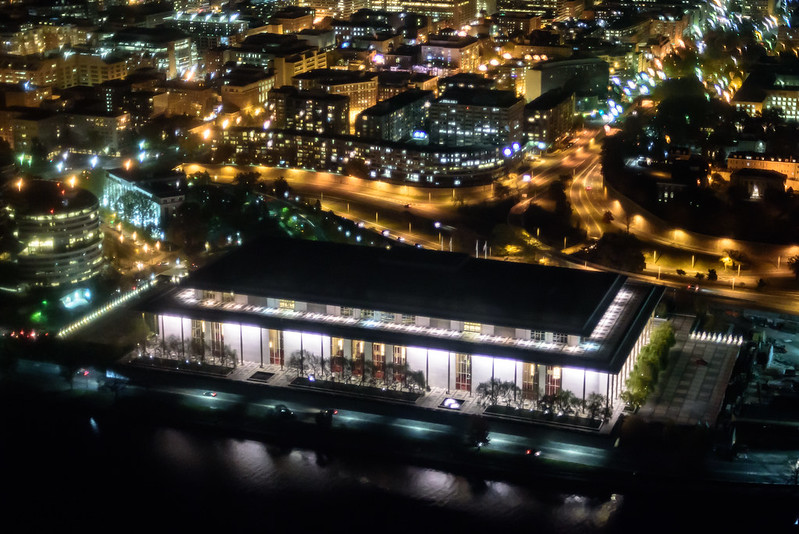 From the Kennedy Center:

“The John F. Kennedy Center for the Performing Arts announces today that it will cancel all previously scheduled programs through April 25, 2021, due to the ongoing impacts of the COVID-19 pandemic. Additionally, Washington National Opera’s spring productions and much of the late spring and early summer touring theater programs have been canceled. During this period, the Center will offer an extremely limited number (20 or fewer) of in-person performances, as conditions allow, and expand its online offerings with a new platform called Digital Stage+–a free benefit for donors, members, and subscribers–while continuing to develop robust arts education content for students across the country. These most recent cancelations in 2021 represent 384 ticketed events and a financial loss of $24.1 million for the institution, plus an additional $7 to $8 million of revenue from programs that had not yet been announced. Combined with the fall cancelations in excess of $50 million, the total earned revenue loss for FY21 now stands at over $80 million.

Since its initial closure in March and as area restrictions have continued to evolve, the Kennedy Center has demonstrated leadership and creativity, presenting a range of programs for small in-person audiences of 50 or less (On Stage at the Opera House, Sunset concerts, Frontline Worker Appreciation Nights, and community programs throughout the region) and investing in original video content that has been watched more than 100 million times. Beginning in the summer, the memorial and REACH campus re-opened as a D.C. destination for visitors seeking to gather safely and responsibly.

Beyond April 25, the Broadway national tours of Jesus Christ Superstar (May 25 – June 13), Freestyle Love Supreme (June 8 – 13), Oklahoma! (June 22 – 27), Dear Evan Hansen (June 29 – July 18), and The Band’s Visit (July 28 – August 8) have canceled their upcoming engagements at the Kennedy Center. Plans to bring these productions to the Center in future seasons will be announced at a later date. Alvin Ailey American Dance Theater performances, originally scheduled for February 2-7, will shift to June 22-27, 2021.

“The Kennedy Center has now lost more than half of its 2020-2021 season due to the continued shutdown, and over $80 million in earned income that would have been generated from those programs,” commented Kennedy Center President Deborah F. Rutter. “Despite substantial expense and staff reductions, the institution’s only path forward is a strategic focus on increasing contributions from our donors and patrons while we wait to re-open. Their generosity and patience over the last eight months have made all the difference and kept us strong. Today’s announcement represents a longer planning horizon and understanding that it will not be safe to gather large-scale audiences until later in the season. But it also signals our eagerness to plan and program for an eventual re-opening, as well as our commitment to do all that we can to serve our community of artists and audiences in the meantime.”

To thank Kennedy Center donors and subscribers for their loyalty and support during this time, these patrons will have exclusive access to a new digital benefit, Digital Stage+. This program will give donors, members, and subscribers free access to:

On Stage at the Opera House performances including a performance by Robert Glasper Acoustic Trio with DJ Jahi Sundance (available beginning December 4), WNO Marian Anderson Award winner Will Liverman in recital, and Renée Fleming and Vanessa Williams’ acclaimed A Time to Sing, with one new performance available every month, which will also be available for individual purchase by the general public
Highlights from Kennedy Center Honors, including clips never before released online
Performances by the National Symphony Orchestra. Select concerts to be available for purchase by the general public.
Stars from what would have been WNO’s 2020-2021 season performing virtual concerts including the greatest musical moments from the season: Fidelio, Boris Godunov, Così fan tutte, Rigoletto, Nixon in China, and La bohème
The Performances for Young Audiences digital subscription series, featuring six new virtual offerings

The NSO, led by Music Director Gianandrea Noseda and Executive Director Gary Ginstling returns to the Concert Hall with concerts to be digitally captured in December:

Two concerts (December 4 and 11) conducted by NSO Music Director Gianandrea Noseda with music by Stravinsky, Haydn, and Gabrieli, among others. Both concerts will be recorded and available for purchase and through Digital Stage+ at a later date.
On December 18, Principal Pops Conductor Steven Reineke will lead the orchestra in a Holiday Pops program to also be recorded and available to stream for free.

In the spring, monthly performances (February through April) will be streamed digitally with reduced in-person audiences, as possible. Programming details for these concerts and continued NSO community engagement programming will be announced at a later date.

Washington National Opera’s planned May and July productions of La bohème and Blue are canceled due to the COVID-19 pandemic. However, WNO will create the first-ever recording of Jeanine Tesori’s and Tazewell Thompson’s opera Blue, winner of the 2020 Music Critics Association of North America Award for Best New Opera, in early 2021. Documentary filmmaker Nefertite Nguvu has been tapped to tell the story of the making of Blue, to be released this spring.

Elephant & Piggie present SLOPERA!: A Bite-Sized Opera, a new opera intended for all ages based on the book, I Really Like Slop!, by Kennedy Center Education Artist-in-Residence Mo Willems, with a libretto by Willems and music by D.C.-based composer and 2021 Sphinx Medal of Excellence winner Carlos Simon. Scheduled to premiere in spring 2021.
Beethoven in Virtual Reality, directed by Francesca Zambello. Tamara Wilson and Russell Thomas perform two masterpieces from Beethoven’s only opera, Fidelio–including Leonore’s aria “Komm, Hoffnung” (Come, Hope)–accompanied in 360-degree audio by the Washington National Opera Orchestra, conducted by Principal Conductor Evan Rogister.
WNO’s graphic novel version of Fidelio by dramaturg and librettist Kelley Rourke and illustrator Erik Teague, with Leonore as superheroine, will be released this winter along with a digital version featuring a soundtrack recorded by members of the Cafritz Young Artists.
WNO’s Pop-Up Opera Truck will return for an expanded spring tour throughout the Washington region and will include performances of SLOPERA!

Throughout the pandemic the Kennedy Center has continued to develop a robust framework of virtual offerings for schools and families to engage with–including a variety of performances, workshops, and discussions available on the Center’s website.

The re-envisioned spring launches an on-demand virtual Performances for Young Audiences (PYA) subscription series to include six previously announced program offerings, all taking place between February-May 2021. Single virtual tickets will be available for sale at a later date for select shows.

Baltimore-born and D.C.-raised, Grammy®-nominated singer Maimouna Youssef, who blends gospel, jazz, soul, and hip hop. Available late February.
Leonardo and Sam: The Terrible Monster and the Most Scaredy-Cat Kid in the Whole World, Respectively. Emmy Award®-winning Manual Cinema tells Mo Willems’s tale of a not-so scary monster in this world premiere Kennedy Center co-commission. Available early March.
Austin-based Glass Half Full Theatre presents its award-winning “story within a story” using puppetry, Spanish, and English, and tackles cultural heritage, family, and the power of language in Cenicienta: A Bilingual Cinderella Story. Available mid-March.
Falu, who is known for her “Indie Hindi” sound-blending traditions of Indian classical and folk music with western rock, and electronic styles. Available early April.
Super Cello: Hero Practice, a world premiere Kennedy Center and NSO commission mixing live performance and animation, where Scottie Rowell of Atlanta’s Teller Productions and NSO cellist David Teie join forces to tell the story of an ordinary musician discovering the hidden powers of music to become… Super Cello! Available mid-April.
Inspired by the artwork and abstractions of Mo Willems, Ephrat Asherie Dance collaborates with Willems to create another Kennedy Center co-commission, In the MOment: A Drawing Dance, a show about making art out of small things. Scheduled for May 8-23 in the Family Theater, the performance will be available for limited capacity, physically distant audience and part of the on-demand virtual PYA subscription. Available late May.

To enhance students’ access to performing arts learning, schools nationwide will be able to register for free access to these on-demand performances via the Kennedy Center website.

In partnership with Center Theatre Group (CTG) and New Adventures, film screenings of celebrated British choreographer Matthew Bourne’s productions The Car Man, Cinderella, and Romeo and Juliet will be available on select weekends from December to February 2021. Each screening will also include a special introduction by Sir Matthew Bourne OBE. Tickets to view are $10 and can be purchased on the Kennedy Center website.

The Kennedy Center will continue to present limited in-person programming, as conditions allow. The innovative On Stage at the Opera House series will continue with a live chamber series including artists previously confirmed for the Fortas chamber music season, including the Calidore String Quartet, the Kalichstein-Laredo-Robinson Trio, the Aizuri Quartet, and pianist Benjamin Grosvenor. Other performances will feature a celebration of the 80th birthday of D.C.-native and jazz luminary Billy Hart, saxophonist Logan Richardson’s Blues People, and classical vocalists. Additionally, a special series of On Stage performances will spotlight unique pairings of artists across all genres, which will be filmed for special release online.

At the REACH, yoga on the lawn will resume beginning in April and we will welcome Millennium Stage back to campus with live outdoor performances 3 days a week (weather pending). Beginning on January 16, 2021, the REACH will also be home to an outdoor art installation built around the concepts of unity and peace. Following a year when differences and divisions have dominated headlines, the campus’s 130,000 square feet of green space will be a place where visitors can reflect on our common humanity and be inspired by expressions of unity, harmony, and peace. As visitors explore the campus, they will encounter three sculptures created for the installation and, on weekend evenings, complimentary projections of thematically related reflections and statements by artists from across the globe will be projected on the REACH video wall.

For 42 years, the Kennedy Center and the arts and entertainment world have gathered together on the first Sunday in December to fete the annual slate of Kennedy Center Honorees and their unparalleled influence on American culture. Given this year’s extraordinary circumstances, the Honors will be reimagined to celebrate our cultural icons in an unconventional, hybrid format featuring a mix of virtual tributes and small-capacity, in-person live performances in the late spring. The slate of Honorees and event date for the 43rd Kennedy Center Honors will be announced at a later date.

Deborah Rutter noted, “While we cannot gather 2,200 guests in the Kennedy Center Opera House, we are embracing this opportunity to be innovative in our approach and harness the abundance of our campus space. We are actively working with White Cherry producers and CBS on concepts that will creatively redesign the Kennedy Center Honors as we know it. Our determination to move forward with the Honors is driven by our belief that this beloved American tradition will uplift America, especially in these challenging times.”