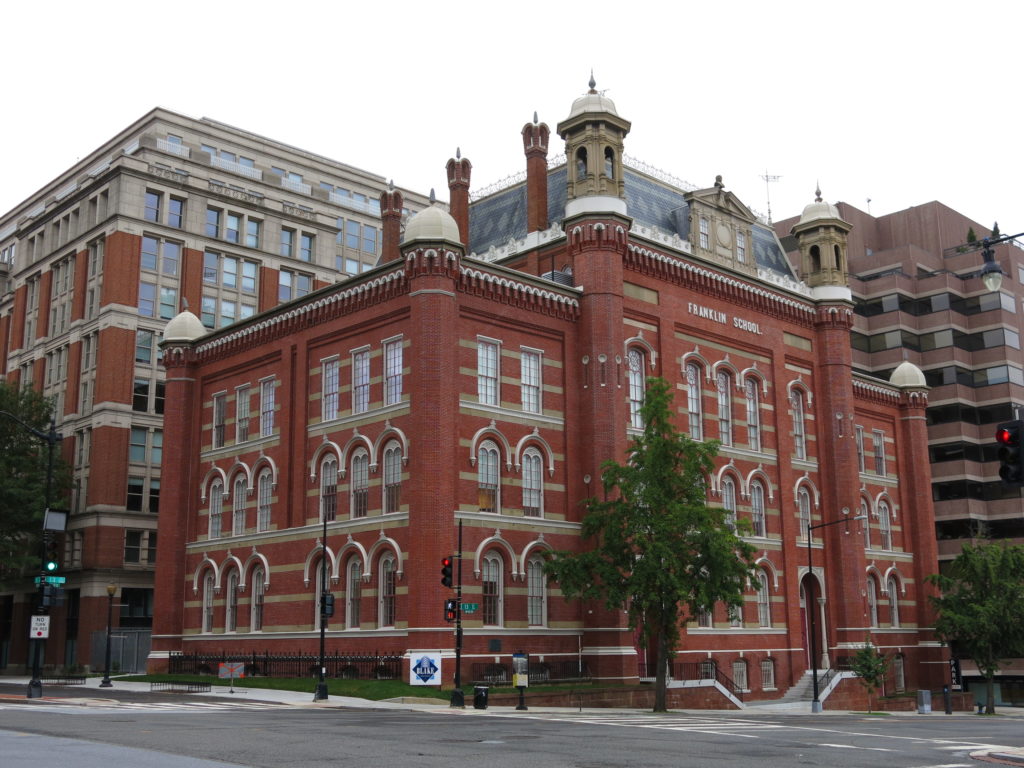 “Planet Word, a revolutionary museum dedicated to the power, beauty, and fun of language and to showing how words shape the human experience, announced that it will open to the public on Thursday, October 22nd. Housed in Washington, D.C.’s historic Franklin School, Planet Word will be the world’s first voice-activated museum, featuring immersive galleries and exhibits that will engage visitors of all ages in experiencing words and language from a wide range of perspectives. General admission will be free.

“During the coronavirus pandemic, our focus has remained on the health and safety of our employees, contractors, and future visitors. We’ve continued the work of designing immersive and interactive galleries, curating content to feature in our exhibits, and revitalizing the historic Franklin School, with deference to guidance from public health officials,” said Planet Word Founder and CEO Ann Friedman. “Now, as we prepare to open Planet Word in October, I want to again thank the Planet Word staff and all of our partners for their tireless commitment to this project. I will be thrilled to finally – safely – open the world’s first museum dedicated to bringing language to life.”

The mission of Planet Word – to renew and inspire a love of words, language, and reading as the foundation of a strong modern democracy – has resonated with supporters throughout the nation. Since breaking ground in June 2018, Planet Word has met its initial $20 million goal to cover the creation of the museum’s exhibits, experiences, and start-up operating costs. Planet Word’s generous donors include AT&T, Bloomberg Philanthropies, Carolyn Bucksbaum, the Diller-von Furstenberg Family Foundation, Ann and John Doerr, Microsoft Corporation, and Christine and Stephen A. Schwarzman. The rehabilitation and restoration of the Franklin School as a home for the museum was funded and is being overseen by Ms. Friedman.

Planet Word plans to open on a limited basis, requiring visitors to register in advance for timed tickets. Masks will be mandatory, and access to galleries will be controlled to support social distancing. Stylus pens compatible with its interactive exhibits will be available to avoid the need to touch surfaces. Ticketing information and details of Planet Word’s safety guidelines can be found at PlanetWordMuseum.org.

Planet Word also announced a multifaceted partnership with Shared_Studios, a global collective that creates meaningful human connections between people separated by distance and difference through transformative conversations in both immersive and virtual environments.

The museum will be home to one of Shared_Studios’ famed Portals, shipping containers outfitted as studios featuring immersive AV technology that enables visitors to converse and interact with people from around the world as if in the same room. Visitors to the Planet Word Portal will make connections with others across the globe – and in doing so discover the richness of languages and how words shape our lives, our decisions, and our relationships.

Planet Word and Shared Studios are also launching DIVERCITIES, a program that will explore the commonalities – and the uniqueness – of languages in cities and cultures across the world. Each month, through moderated conversations with comedians, poets, artists, journalists, educators, and activists, DIVERCITIES will connect D.C. locals with peers in cities in the Portal network, including Lagos, Erbil, Milwaukee, Mexico City, Berlin, and Dallas.

DIVERCITIES will launch in September in advance of the museum’s opening. For more information about this initiative and other Planet Word programming, visit PlanetWordMuseum.org/programming.

Planet Word is a nonprofit museum dedicated to the power and fun of language. Founded by philanthropist Ann Friedman, the museum will invite visitors of all ages to experience what words mean to the human experience in a fun, technologically advanced, immersive environment. Scheduled to open on October 22nd, 2020, it is housed in the Franklin School at 13th and K Streets NW, a National Historic Landmark with a rich history in public education and the site of the first wireless voice transmission by Alexander Graham Bell in 1880. Planet Word is overseen by a Board of Directors that includes leaders in education, media, real estate, technology, the arts, and museums, led by Chair Ann Friedman. Renovation of The Franklin School was overseen by Beyer Blinder Belle and the general contractor was Whiting-Turner. Planet Word’s project partners include Local Projects for exhibit design and media production, Solomon Group as exhibit fabricator, installer, and A/V integrator and Lone Shark Games for development and production of “Lexicon Lane: A Word Sleuthing Adventure!” For more information, visit PlanetWordMuseum.org.

Explore the commonalities, uniqueness, and richness of languages in cities and cultures across the world. Each month, a local D.C. comedian, poet, artist, journalist, educator, or activist will join in conversation with peers from around the world to explore the rich, unique ways different cities and cultures use and experience language. Participants include Nigerian poets, Iraqi hip hop artists, street artists from Germany and Mexico, and comedians from Los Angeles and Rwanda.

Global Poetry Share from Nigeria
Wednesday, September 9 at 11:00 am ET

There are over 500 native languages spoken in Nigeria, two of the main being Yoruba and Igbo. In this connection to Lagos, the most populous city in Africa, hear from poets who write in a number of these languages. Listen for the similarities and differences in each language, explore the poetic forms at work, and learn about some of the country’s prolific poets! Featuring local D.C. poet Charity Blackwell.

In this virtual music + conversation series, join Milwaukee Portal Curator and Global Hip Hop Continuum series host Lewis Lee as he tours the hip hop hot spots around the world from Rwanda to Mexico. As a rapper, producer, and lyricist, Lewis engages artists from around the world for performances, conversation on the hip hop scenes in their communities, and interactive creative workshops. First stop, Erbil, Iraq, where Lewis will meet rapper Rami Khalaf aka MC Rami for a deep dive into the Iraqi rap underground.

Street Art around the World
Wednesday, November 11 at 11:00 am ET

Join fearless muralists and graffiti artists from Mexico, Berlin, and Kabul for a global dialogue on the power of street art as a mode of civic engagement, an exercise in freedom of expression, and a channel to tell stories of a community. While we may not be able to roam the streets of our cities for great works of street art, learn from these artists how do develop your own signature style at home!

The Universal Language of Comedy
Wednesday, December 9 at 11:00 am ET

In this laugh-packed connection, join comedians from Kigali, Dallas and Los Angeles for a global comedy-share. These unique talents from across the globe share a quick 5-minute comedy set and a panel conversation on the comedic landscapes of their cities, and how to sustain and support independent comics during the era of COVID-19.”