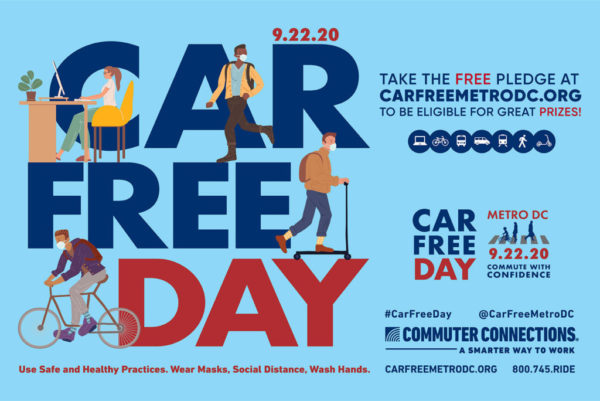 Has it been a year already? Don’t look now, but Tuesday, September 22, is officially Car Free Day.

Car Free Day is an international event that heightens awareness of the impact of traffic on the quality of life in the region and is celebrated in more than 2,000 cities in 46 countries. Locally, the event is hosted by Commuter Connections, the regional network of transportation organizations coordinated by the Metropolitan Washington Council of Governments.

People are encouraged to telework or travel without driving alone in cars, by choosing alternative methods such as bicycle, walking, scooter, train, bus, or using a carpool or vanpool.

To participate, just fill out the pledge form, then go car free or car-lite (carpool, vanpool) on Tuesday, September 22. Once you take the free pledge, you receive special promotions and are entered into a raffle to win prizes.

To help commuters assuredly ease back to work, Commuter Connections launched its “Commute with Confidence” webpage to serve as a vital resource for commuting in a safe and healthy manner. As the region methodically begins to re-open for business, this clearinghouse provides valuable tips and guidance from the Centers for Disease Control and Prevention, state governments, local jurisdictions and transit providers. The comprehensive tool provides important recommendations on how commuters can keep as safe as possible while commuting, using both shared and non-shared travel modes.

Already car free? Those who are already reducing the region’s carbon footprint can also fully participate in Car Free Day by taking the pledge and qualifying for promotions and prizes.

Commuter Connections, the regional network of transportation organizations coordinated by the Metropolitan Washington Council of Governments, offers free services and programs that help employees and employers throughout the region find the most cost-effective, convenient, and safe commutes. Information on ridematching, public transit, HOV/Express lanes, park-and-ride lots, bicycling, teleworking, and commuter incentives are among the services Commuter Connections has been promoting since its founding in 1974.