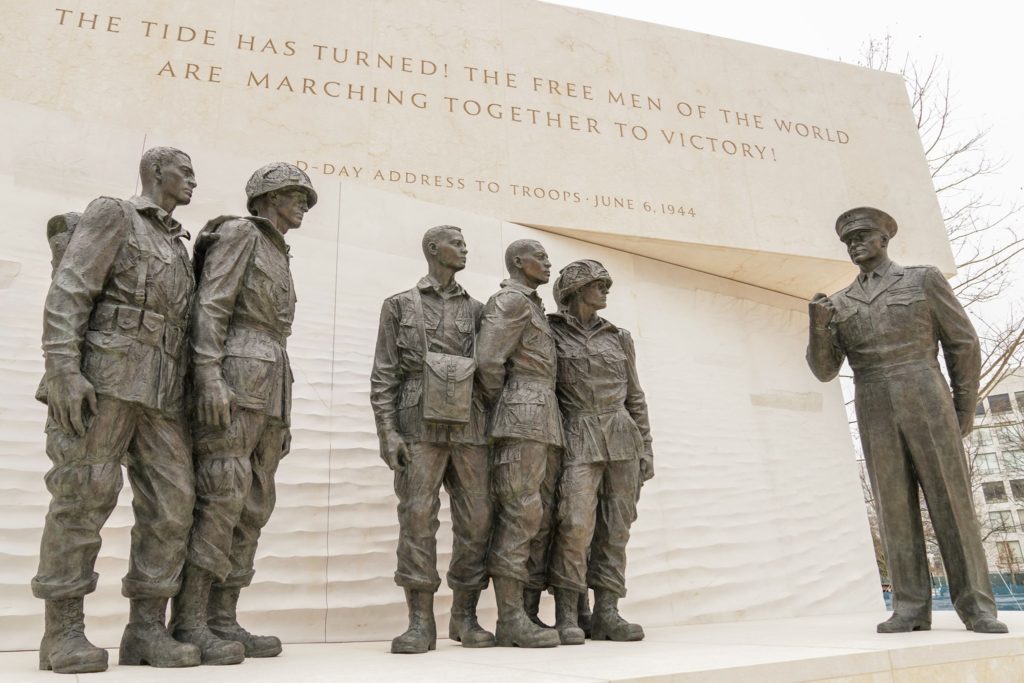 You can take an audio tour here.

Full press release about the dedication:

“After a delay due to the global pandemic, the formal dedication of The Dwight D. Eisenhower Memorial in Washington, D.C., will take place on Thursday, September 17, 2020.

The Memorial, commissioned by Congress in 1999, honors the legacy of the World War II Supreme Allied Commander and nation’s 34th President. Emceed by Bret Baier, the early evening ceremony will feature an address by Senator Pat Roberts of Kansas (chairman of the Eisenhower Memorial Commission), recorded remarks by former Secretary of State Condoleezza Rice and performances and appearances by the 101st Airborne Honor Guard, “The President’s Own” United States Marine Band and Voices of Service.

“I am proud to honor Kansas’ favorite son with the unveiling of the Dwight D. Eisenhower Memorial. This memorial pays tribute to Ike’s historic leadership as both Supreme Allied Commander and the 34th President of the United States, who hailed from Abilene, Kansas,” said Senator Pat Roberts, chairman of the Eisenhower Memorial Commission. “The Eisenhower Memorial not only commemorates the life and legacy of an extraordinary man; it also stands as a symbol for all generations of the promise of America and what our values make possible here and around the world.”

Like many other events during the pandemic, the Memorial dedication has been modified in scale for the safety and health of guests. Dedication plans follow CDC guidelines for events and gatherings, allowing for appropriate social distancing at the outdoor Memorial. The dedication will be live-streamed so those not physically present can mark the moment.

“While we have had to adjust our celebratory plans, it’s important to note that Eisenhower’s legacy, as honored through the Memorial, transcends one moment in time and must be shared with the world,” said Victoria Tigwell, deputy executive director of the Eisenhower Memorial Commission. “We are thrilled that the Memorial is opening to the public, so that generations of future visitors can learn about, remember and pay tribute to the man who helped shape America and the world through his extraordinary leadership.”

As Commander of the Allied Expeditionary Force in World War II, Eisenhower led the invasion of Normandy, a dramatic turning point in the war. While he is perhaps best known globally for his role in defeating the Nazis, Eisenhower served two terms as President of United States during a pivotal time in history. His post-war leadership transformed America through commitment to education, transportation and exploration. His foreign policy ultimately led to the collapse of Soviet domination of eastern Europe.

“As decades have passed, historians increasingly have recognized and valued the significance of Eisenhower’s presidency,” said Tigwell. “Truly great Presidents have a vision that lasts well beyond their four or eight-year terms, and Eisenhower’s vision is evident still today. We hope the Memorial encourages visitors to reflect on the critical role he played in American and world history.”

The dedication of the Memorial marks the culmination of years of work by the Eisenhower Memorial Commission and its chairman Senator Pat Roberts (Kansas), Memorial architect Frank Gehry, and the designers, artists, construction teams and others to bring the Memorial project from vision to reality. Invited guests for the dedication ceremony include President Trump, current and former members of Congress, current and former Cabinet members, military leaders, the Eisenhower family and others impacted by the late President’s contributions. Following the dedication, the National Park Service will assume operation of the Memorial, which opens to the public on Friday, September 18.

The Memorial is located in a newly created, four-acre public park adjacent to the National Mall and across the street from the Smithsonian National Air and Space Museum. Gehry’s design is a combination of grand architectural elements, sculpture and green space, which highlights Eisenhower from his humble childhood in America’s heartland, to his decisive role as Supreme Commander of the Allied Expeditionary Force in World War II and his two terms as President.

The Memorial features three bronze sculptures of Eisenhower by sculptor Sergey Eylanbekov, stone bas relief images and inscription panels with words from notable Eisenhower addresses. Framing the entire park and Memorial is a first-of-its-kind stainless steel woven tapestry by artist Tomas Osinski, which depicts the cliffs at Pointe du Hoc on the Normandy coastline in peacetime.”

Read more →
More Stories
Random Reader Rant and/or RevelIn the before times you might be wondering about these on your way to work – PARK(ing) Day 2020!