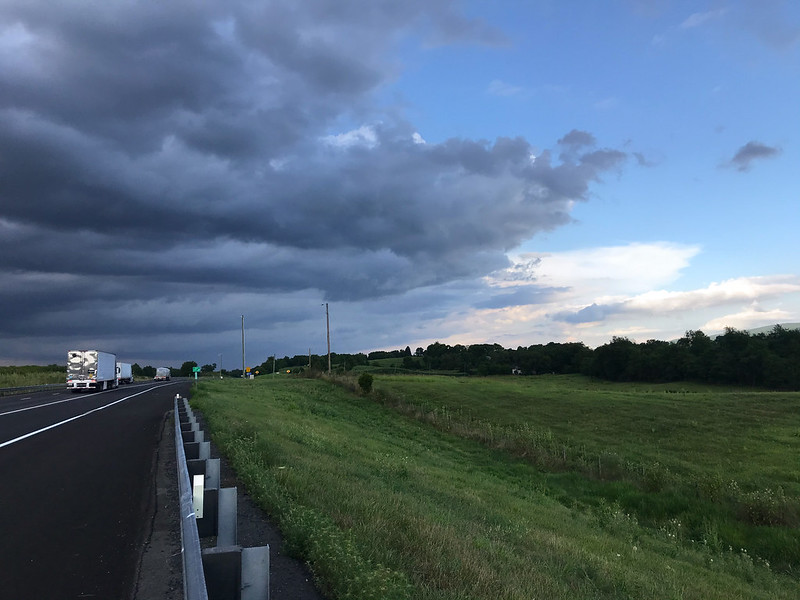 “The National Weather Service has issued a Tropical Storm Warning for The District of Columbia at 11:05AM EDT until further notice.

A Tropical Storm Warning means tropical storm-force winds are expected somewhere within this area within the next 36 hours.

– THREAT TO LIFE AND PROPERTY THAT INCLUDES TYPICAL FORECAST UNCERTAINTY IN TRACK, SIZE AND INTENSITY: Potential for wind 39 to 57 mph

– The wind threat has remained nearly steady from the previous assessment.

– PREPARE: Remaining efforts to protect property should be completed as soon as possible. Prepare for limited wind damage.

– ACT: Move to safe shelter before the wind becomes hazardous.

– Many large tree limbs broken off. A few trees snapped or uprooted, but with greater numbers in places where trees are shallow rooted. Some fences and roadway signs blown over.

– A few roads impassable from debris, particularly within urban or heavily wooded places. Hazardous driving conditions on bridges and other elevated roadways.

– Peak Storm Surge Inundation: The potential for up to 2 feet above ground somewhere within surge prone areas

– THREAT TO LIFE AND PROPERTY THAT INCLUDES TYPICAL FORECAST UNCERTAINTY IN TRACK, SIZE AND INTENSITY: Potential for storm surge flooding greater than 1 foot above ground

– The storm surge threat has remained nearly steady from the previous assessment.

– ACT: Leave immediately if evacuation orders are given for your area.

– Localized inundation with storm surge flooding mainly along immediate shorelines and in low-lying spots, or in areas farther inland near where higher surge waters move ashore.

– Minor to locally moderate damage to marinas, docks, boardwalks, and piers. A few small craft broken away from moorings.

– THREAT TO LIFE AND PROPERTY THAT INCLUDES TYPICAL FORECAST UNCERTAINTY IN TRACK, SIZE AND INTENSITY: Potential for major flooding rain

– The flooding rain threat has remained nearly steady from the previous assessment.

– PLAN: Emergency plans should include the potential for major flooding from heavy rain. Evacuations and rescues are likely.

– PREPARE: Strongly consider protective actions, especially if you are in an area vulnerable to flooding.

– ACT: Heed any flood watches and warnings. Failure to take action will likely result in serious injury or loss of life.

– Major rainfall flooding may prompt many evacuations and rescues.

– Flood waters can enter many structures within multiple communities, some structures becoming uninhabitable or washed away. Many places where flood waters may cover escape routes. Streets and parking lots become rivers of moving water with underpasses submerged. Driving conditions become dangerous. Many road and bridge closures with some weakened or washed out.

– Situation is unfavorable for tornadoes

– THREAT TO LIFE AND PROPERTY THAT INCLUDES TYPICAL FORECAST UNCERTAINTY IN TRACK, SIZE AND INTENSITY: Tornadoes not expected

– The tornado threat has remained nearly steady from the previous assessment.

– PLAN: Tornadoes are not expected. Showers and thunderstorms with gusty winds may still occur.

– PREPARE: Little to no preparations needed to protect against tornadoes at this time. Keep informed of the latest tornado situation.

– ACT: Listen for changes in the forecast.

– POTENTIAL IMPACTS: Little to None

– Little to no potential impacts from tornadoes.”

More Stories
“The Original Horace & Dickie’s for lease” just off of H Street, NE“a bicyclist was critically injured in a hit-and-run bicycle crash on Friday, July 10” at New Hampshire and Quincy St, NW – Looking for witnesses