Get our email!
Search
art, History 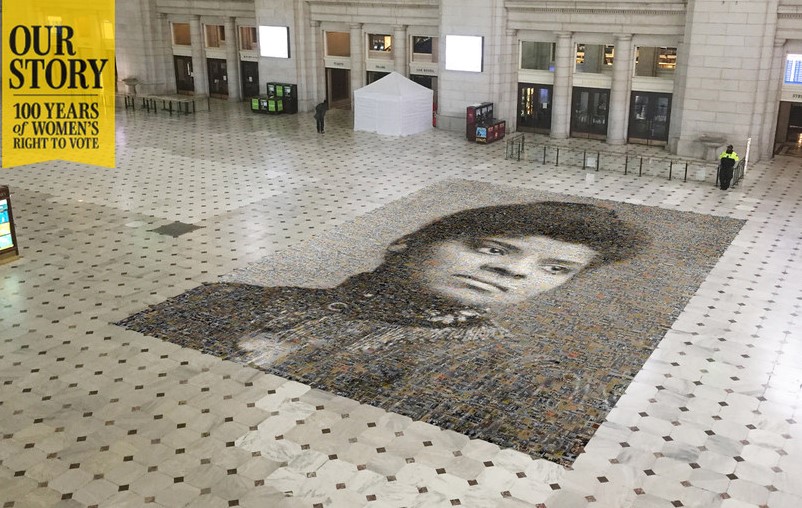 “Our Story: Faces of Suffrage, Portraits of Change Art Exhibit

Our Story: Faces of Suffrage, Portraits of Change is an interactive photo mosaic and art installation depicting a portrait of suffragist and civil rights activist Ida B. Wells. Created by artist Helen Marshall of the People’s Picture, commissioned by the Women’s Suffrage Centennial Commission, and produced by Christina Korp, Purpose Entertainment, Our Story commemorates the 100th anniversary of the 19th Amendment and women’s right to vote in the United States. From August 24 to 28, 2020, a large-scale installation of the photo mosaic will be on display in the Main Hall at Union Station.

The mosaic is made up of thousands of photos telling myriad stories of the suffrage movement. In a companion online mosaic, viewers can explore portraits and stories and discover the many National Women’s Suffrage Month programs and events taking place nationwide to commemorate the suffrage centennial in 2020.”

From the Women’s Suffrage Centennial Commission:

“About Ida b. Wells

(1862-1931) Educator, journalist, suffragist, and anti-lynching activist Ida B. Wells fought fearlessly for her beliefs. Through her ground-breaking journalism, Wells brought attention to the lynchings of Black people in America, and she fought for civil rights throughout her life. In 1913, Wells founded the Alpha Suffrage Club to organize women of color in Chicago. That same year, Wells marched in the Washington, D.C. suffrage parade, which was racially segregated. Wells famously refused to march in the back of the procession and instead marched with the Illinois delegation. She challenged white suffrage leaders to fight for the rights of all women. Wells’ extraordinary life and activism still resonates today.”