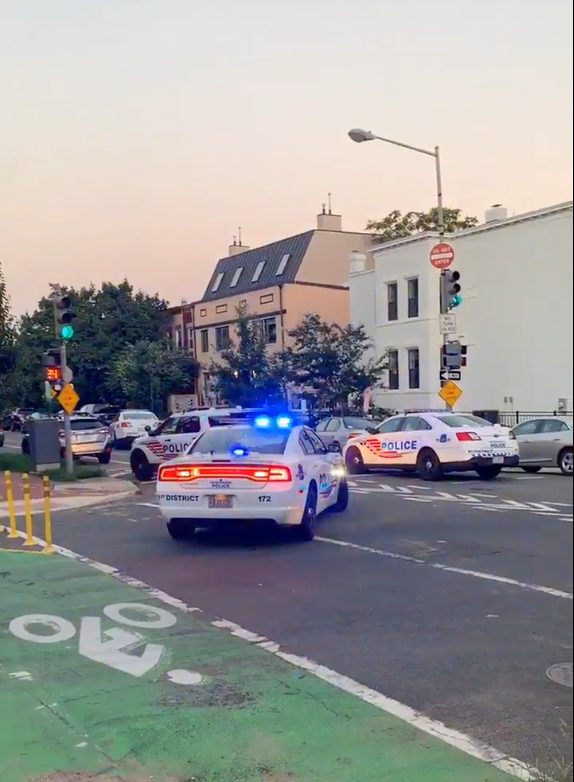 Readers reported: “why is a DC PD helicopter doing constant circles over H and I streets NE between 8th and 6th? This has been going on for 10 minutes…”

“It was crazy! I’m right at the top of 6th where Florida crosses & cops were all around the house! I saw 5 cops Running down FL past 7th street not sure what happened next”

“Car and about 7 police cars sped past me just south of H street and almost hit my friend and I. Was crazy to watch, helicopter following and everything.”

“HUGE police presence on M st and 6th NE. At least 20 cop cars and a helicopter overhead. Any news on what this is?”

“Re the chase ending near union market. Saw the car speed down our alley closely followed by an unmarked car with its siren on. An hour or so later we’re out with the dog and a few cops are talking. Said four juveniles carjacked a bmw at knifepoint at 10 and L and then joyrode for a while. They ditched on the 600 block of Orleans or the alley bw Orleans and Morton and were immediately arrested. Amazingly nobody got hurt at any point. Was a bit hairy for a while with the chopper and lots of cop cars. But anyway, that’s it from the horse’s mouth.”

“On 8/10/20 at approximately 6:54 p.m., First District officers responded to the 900 block of 11th St NE for a report of an armed carjacking. On the scene, the officers located an adult victim who reported that while he was unpacking his vehicle, he was surrounded by four suspects. One of the suspects showed him a knife and demanded his personal belongings, including his car keys. The victim surrendered his property and the suspects entered the vehicle and drove northbound. The victim was not injured during the offense.

A short time later, officers canvassing the area located the carjacked vehicle. A brief pursuit was conducted, terminating in the 600 block of Orleans Pl NE. Four suspects attempted to flee on foot, but were quickly stopped without further incident due to the coordinated response of the officers. All four suspects were placed under arrest after being and positively identified by the victim.

While the case has been closed with the arrests of the suspects, First District Detectives will continue to investigate the incident as the case is prepared for prosecution in court. If any member of the public has information or video of the incident, please contact the First District Detectives office at (202) 299-2025, or the Metropolitan Police Department’s Command Information Center at (202) 727-9099.”

More Stories
“4ft but looks smaller”Double Shooting at 9th and Kennedy Street NW around 9:30pm last night, a 17 year old has been killed