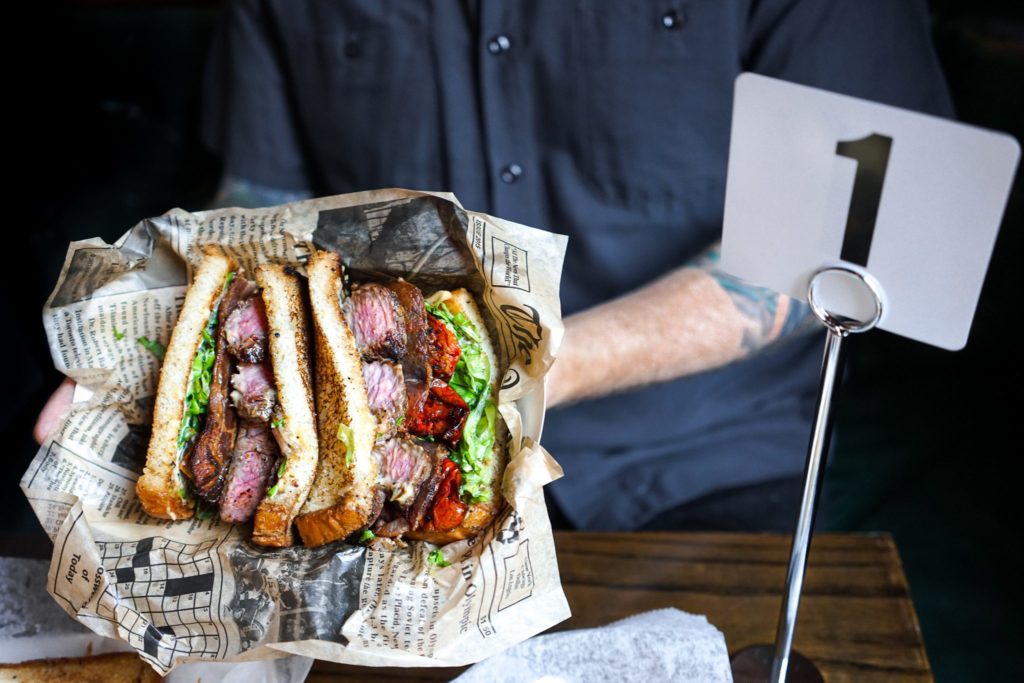 “Chef Andrew Markert, the fearless leader behind Beuchert’s Saloon, is sending the Capitol Hill restaurant “on vacation for a while” beginning on August 16th and Fight Club will take over on August 19th, serving his off-the-wall but totally on-point sandwiches, snacks and boozy punches. Fight Club will sling Markert’s anything-but-traditional take on classic sandwiches and his personal favorite snacks paired with whimsical punches dreamed up by beverage director Mackenzie Conway. Fight Club will offer carry out, delivery and fast casual service with outdoor seating at its Capitol Hill home base.

Markert, who celebrated Beuchert’s 7-year anniversary the day DC restaurants were ordered to close for in-person service, decided not to reopen for indoor dining until it was completely safe to do so and, like many chefs and restaurateurs, was confronted with operating a business designed for an in-person hospitality experience without the ability to welcome guests. Enter Fight Club, a concept that would crank out fun, funky punches and sandwiches (hence the name) that had been dancing around in Markert’s head for over a year. He decided to go full-tilt on Fight Club, which capitalizes on hand-held items, proven to be bestsellers for Beucherts’ carry out business, and allows him to continue to employ some of his staff. Markert intends to reopen Beuchert’s when it is safe to do so and has hopes to find a new, permanent home for Fight Club in the future.

“Beuchert’s overhead and labor just isn’t sustainable without doing in-house dining and I’m not comfortable doing that at this point,” says Markert, owner and executive chef of Beuchert’s Saloon and Fight Club. “Instead of closing our doors completely for the time being, we’re going to give Fight Club a go, which allows us to test the concept and employ my staff in a safer setting until Beuchert’s can come back.”

When crafting the menu at Fight Club, Markert did his research, looking at the staples on menus at both local and national sandwich spots he loves. He took those classics and turned them on their head, applying his non-traditional cooking approach to sandwiches that will have all the elements people know and love, just in a new way.

“Fight Club isn’t your standard Italian, Reuben, BLT place”, says Markert. “When someone looks at the sandwiches, I think they are going to be very intrigued and wonder how those flavors will work together. It’s gonna be like the sandwich you never knew you needed.”

At Fight Club, a ho-hum ham sandwich is transformed into the Ham and Mustard made with Benton’s smoked ham, braised mustard greens, onion fondue and aged cheddar on rye; the Beefsteak and Cheese is a vegetarian play on the name made famous in Philly featuring roasted beefsteak tomatoes, cherry pepper relish, grilled onions, sharp provolone and fermented honey mayo on a soft hoagie roll; a Tonnato Melt ups the classic tuna melt using roasted pork, tonnato sauce, pickles, American cheese and bacon on sourdough; and the Salami and Slaw is an all new combo of fried genoa salami, Napa cabbage slaw, hot mustard and potato sticks, all on zesty garlic bread.

Snacks that Markert is personally fond of or has a connection to serve as appetizers or items guests can cobble together as their full meal. His mom’s specialty makes the menu with Momma D’s Crab Imperial with chili powder, ritz crust and scallions alongside one of his favorite foods, a soft pretzel. Memories of eating his way through Chicago with friends bring the Walking Taco with seasoned beef taco meat, queso fresco, pickled chilies and crema smothered over corn chips and topped with scallions. Half-Smoke Pups give props to DC, featuring a cornbread-battered sausage, Zatarain’s mustard and scallions.

To pay proper homage to Beuchert’s, Markert was sure to include Potatoes Fried the French Way with sauce ravigote and Oh You Fancy, a charcuterie plate with a selection of meats and cheeses, in the snack offerings.

Not one to leave out dessert, Markert will whip up sweet offerings including Churros coated in sugar and cinnamix and served with Mexican chocolate dip and a Sundae featuring vanilla frozen custard, brownie bites, sprinkles, hot fudge and whipped cream with a cherry on top. Guests will still be able to score Markert’s ice cream that has been available at Beuchert’s by the pint for carry out as well as sandwiched between rotating flavors of fresh-baked cookies.

Fight Club and Beuchert’s Saloon beverage director Mackenzie Conway’s drink list is packed with his bottled still and sparkling punches that are tried and true cocktails presented with a laid-back, modern approach.

“These are familiar cocktails we’ve been consistently making, we’re just pushing it into a new style,” says Conway. “It’s as if Beuchert’s went to the beach. If I were packing a cooler this is exactly what I would stock it with.”

The punch list, designed to be bright and refreshing in order to cut through the savoriness of the sandwich menu, is presented by weight class (read: potency). The Fly Weight category includes the Aperol Spritz, an easy-drinking summer staple featuring aperol, sparkling vino, bubbles and orange; the Welter Weights take it up a notch with picks such as the Diego Rivera with mezcal, grapefruit, lime and maraschino; and the Heavy Weights hit hard with offerings including Petey’s A Pretty Bird featuring dark and light rums, pineapple, campari and lime. Conway made it a point to have his punches at accessible price points when compared to other options around town. Guests can also expect large-format bottled punches coming down the pike.

The beverage program is topped off by selections of white, rosé and sparkling wines as well as a featured glass of the day of “random stuff [they] like” and beers ranging from Mickey’s Big Mouth to craft picks. Guests can also opt for a beer and shot combo with a pony pour. Those opting out of alcohol have options including Vernor’s ginger ale, cane sugar Coke and Sprite and Foxon Park White Birch Beer.

THE WEEKEND BREAKFAST AND LUNCH (NOT BRUNCH)

Breakfast or lunch, purposely not called brunch in an effort to “keep the Karens away”, is available on the weekends with offerings including Chicken and Waffles with buttermilk-fried chicken, maple aioli, bacon jam and pecan waffles made famous at Beuchert’s; a Bodega Egg & Cheese featuring bacon or pork roll, fried egg, American cheese, FUCK THE SYSTEM hot sauce (made/sold by staff member Maya Fiellin and proceeds from which are donated to the Stop Police Terror Project DC) and cultured butter on a sesame roll; and A Small Donkey otherwise known as a burrito with taco meat, scrambled eggs, cheddar cheese and taco sauce.

Weekend guests can get their kicks with iced or hot Vietnamese coffee, available spiked with whiskey, or Deconstructed Mimosas aka a can of sparkling wine, orange juice and a cup.

Fight Club is open daily from 11 AM- 9 PM. Guests can order online at www.fightclubdc.com (site will be live on 8/13) for pick-up or in-person at the kitchen counter for carry out or seating on the sidewalk or back patio. Delivery is available via Caviar, DoorDash and Grubhub.

Read more →
More Stories
“Would you please be able to help us find this local hero”Well-Paid Maids is Open for Business!