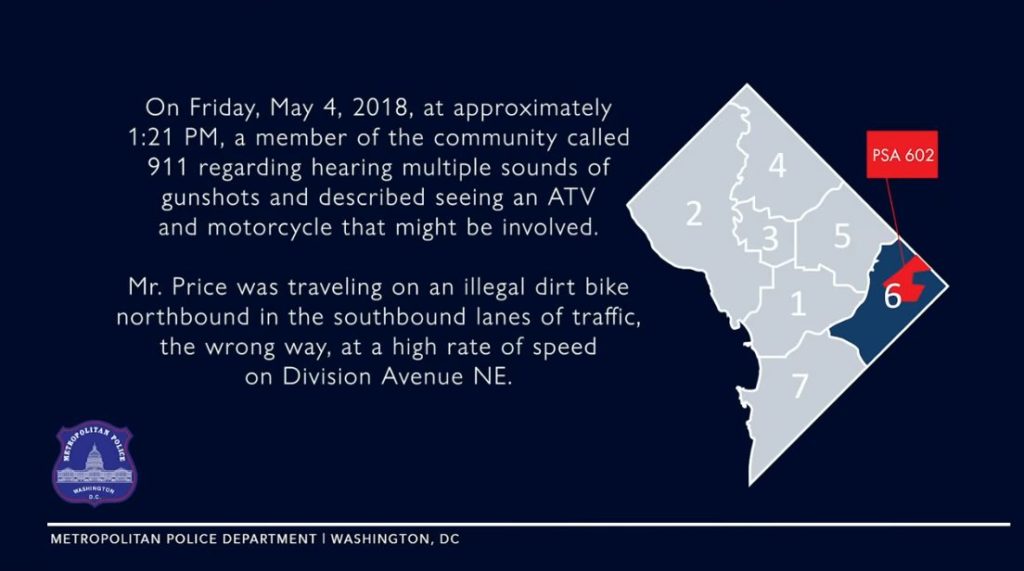 The BWC footage for the following three incidents is now available on MPD’s website:

On Friday, May 4, 2018, at approximately 1:21 pm, a member of the community called 911 regarding hearing multiple sounds of gunshots and described seeing an ATV and motorized dirt bike that might be involved.

Mr. Jeffrey Price was traveling northbound in the southbound lanes of traffic, the wrong way, at a high rate of speed on Division Avenue, Northeast.

An officer, who was in the 5100 block of Fitch Place, Northeast, heard the call for service and began to look for the illegal dirt bike. The officer entered the intersection onto Division Avenue, Northeast, when the motorcycle operated by Mr. Price struck the passenger side of the police vehicle causing the air bags to deploy.

The illegal dirt bike operated by Mr. Price left a skid mark measuring 114 feet prior to impact with the police vehicle. The skid marks begin in the southbound lane in the opposite direction of traffic and continue into the northbound lane. Mr. Price was not wearing a helmet at the time of the crash.

Officers performed first aid until DC Fire and EMS transported Mr. Price to a local hospital where he was later pronounced dead. It was later determined the dirt bike was stolen four days earlier, on April 30, 2018, from Upper Marlboro, Maryland.

On May 9, 2018 at approximately 6:50 pm, an off-duty MPD officer was on his way to attend a cookout with friends. As the officer was off-duty, he was not wearing a uniform or body-worn camera. The off-duty officer was approached by Mr. D’Quan Young, who brandished a handgun. There was an exchange of gunfire between Mr. Young and the off-duty officer. MPD officers arrived on scene and provided first aid until DC Fire and EMS transported Mr. Young to a local hospital where he died.

Seventh District uniformed officers were patrolling near the 3700 block of 1st Street, Southeast, when they observed Mr. Marqueese Alston walking with an outline of a handgun in his front right pants pocket area. Officers attempted to stop Mr. Alston, who fled on foot into an alley. Mr. Alston produced a handgun and fired at officers, while two officers returned fire.

via google maps From MPD: “Detectives from the Metropolitan Police Department’s Sexual Assault Unit announce an arrest has been made in an Assault with Intent to Commit First-Degree Sexual Abuse…