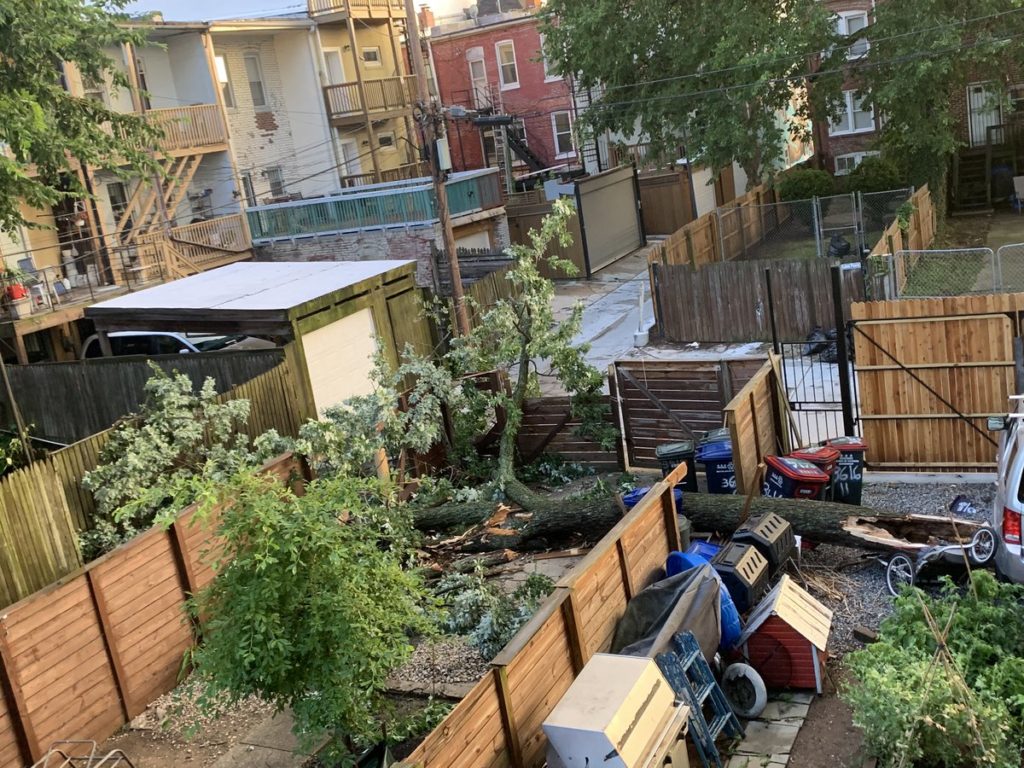 Alexis Diao tweets us a situation we’ve touched on from time to time:

“The limb from an enormous tree next door in Columbia heights straight up fell across our yard and the next door yard. Thankfully no one was hurt. So crazy. my neighbor was standing right under it 20 seconds earlier. There’s damage to my car, flattened the recycling bins like a pancake, broke the fence. I feel really lucky actually bc it could’ve been much much worse. This tree is beautiful and big, but clearly has been dying for some time. We’ve actually had an arborist come out 3 times over 3 years bc we have been concerned about it. They said this tree is an accident waiting to happen. But the owner’s done nothing since we sent our reports.

The arborist for Ward 1 says the city can clear the alleyway limbs, but that’s it. And that they cant compel the owner of the tree to deal w this in any way. basically, we and our neighbors are on our own. And we have to go city mediation (during a pandemic?) to resolve this. This makes no sense to me.

So my actual question is how can the city claim jurisdiction over so-called heritage trees, and mandate their preservation, but refuse to compel a dc citizen to address a tree that poses a threat to life and limb? (The arborists words not mine).

City law makes it difficult to touch any tree of a certain size. Which is awesome, I love trees. The arborist for our ward said this is the second largest tree she’s seen in the city. But what about when a tree is on the downward trajectory of its life cycle?

We have called and messaged the owner and she has yet to respond in any way. This tree could have killed someone. The city employee says it is out of her hands.”

Read more →
More Stories
The Storm and the Rainbow“The United States is the only democratic country that denies both voting rights in the national legislature and local autonomy to the residents of the nation’s capital.”