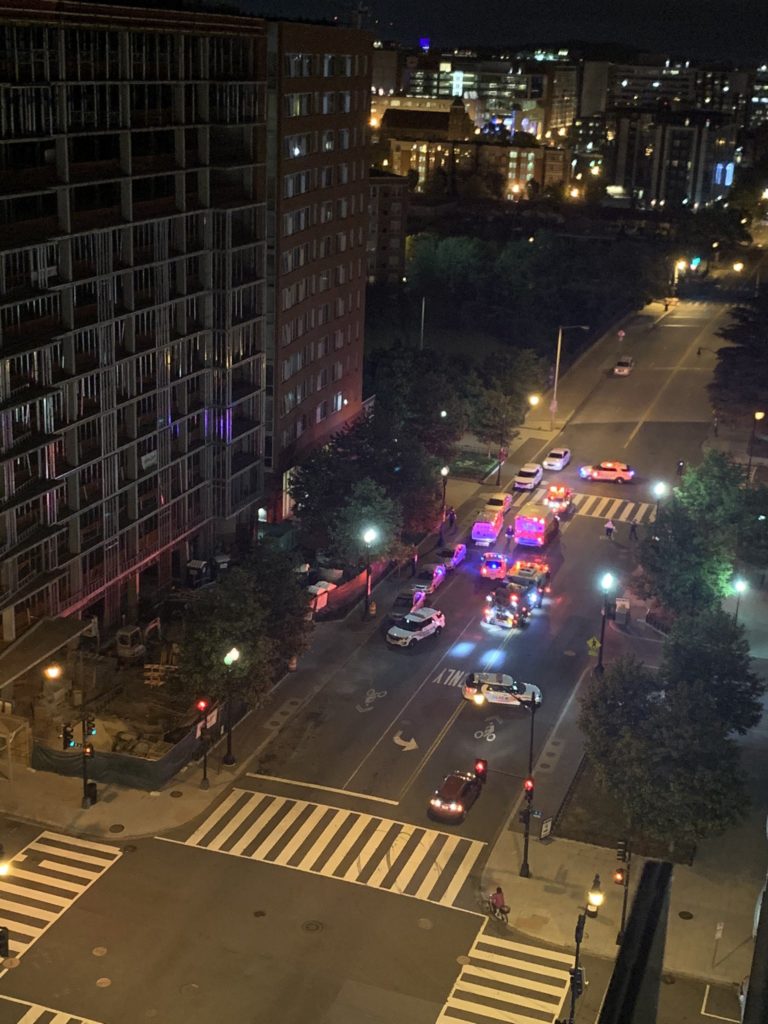 Kate sends around 12:45am: “first the race of cars up New York Ave and now gunshots and tons of cars outside on 4th and K”

Earlier tonight we watched a 10+ car pursuit of an armed carjacker who stole a gold Equinox on the same street.

“First District Patrol and Detectives have concluded an investigation in the 400 Block K Street NW involving an Armed Carjacking.

At approximately 11:30 PM on Tuesday evening, a male food delivery driver was seated in his vehicle when he was approached by a male subject who produced a handgun and ordered him out of his car. The subject then entered the vehicle and drove away. Arriving patrol units obtained a flash-look with the vehicle description and tag number. This information was then broadcasted citywide.

An off-duty First District officer noticed the stolen vehicle a short distance away and radioed for assistance. The vehicle was successfully stopped in the area of New York Avenue and 4th Street NW. Three juvenile were arrested on scene and transported to Juvenile Processing Center. The complainant was not injured in the encounter.

Anyone with additional information about this case is encouraged to telephone First District Detectives at 202-299-2025, the Command Information Center at 202-727-9099 or you may anonymously text your information to 50411

The above listed offense is not related to an ADW Gun offense which took place approximately an hour later (1230 AM) in the 300 Block K Street NW. A separate posting with related information will be sent shortly.”

“First District Detectives are currently investing a ADW Gun offense which occurred in the 300 Block K Street NW at approximately 12:30 AM Wednesday morning.

A male subject was standing in the block when he was struck in his lower extremities by gunfire. The victim was transported by DCFEMS to area hospital in stable condition.

The investigation is still ongoing as of this posting. The initial lookout information is for a male, dreadlocks, wearing a gray sweatshirt with a mask.

Anyone with additional information about this case is encouraged to telephone First District Detectives at 202-299-2025, the Command Information Center at 202-727-9099 or you may anonymously text your information to 50411″

Video of the scene:

GM Steven, we are currently on the scene of a carjacking and shooting.

More Stories
Huge Fire Fire on the top floor of Metro headquarters across from the Capitol One Arena, DCFD Extinguished Fire and No Injuries ReportedA beautiful morning