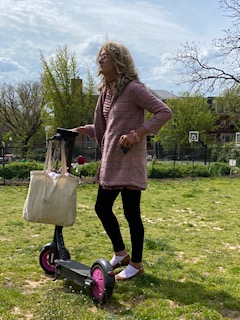 I am hoping for more information. I have now been approach, directly, three times by a young lady dressed in a pink coat (generally on a scooter) on 18th street, in Kalorama Park, and in the Parcourse under the Conn Ave bridge. I have not engaged in a conversation since this person is generally either smoking weed in the moment, or carrying a strong weed aroma. When I tried to ignore her while waiting for my takeout order (Los Cuates is killing it!), she refused to leave me alone and ended up verbally abusing me for several minutes before someone else caught her attention. I directly asked her to leave me alone and please stop harassing me on two of these occasions where I was not in a position to simply move along. I have seen this person doing the same to other people elsewhere in the area (on the Calvert Street bridge and down at Conn/Fla Ave intersection).

Has anyone discovered more here?”

Thanks to all who’ve passed on this scammer report from Reddit.