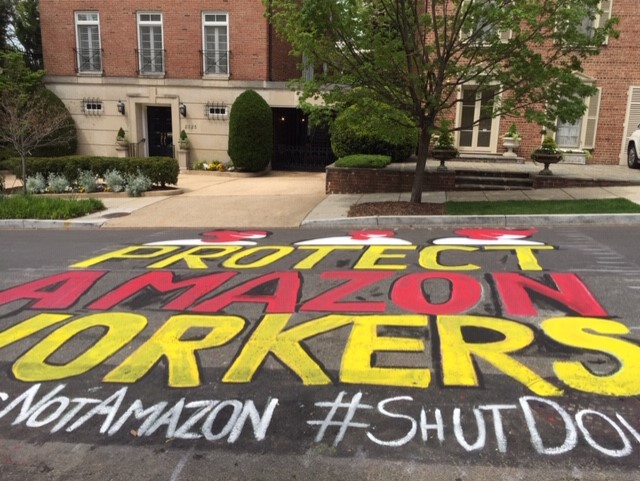 Thanks to Jim for sending the shot above yesterday from Jeff Bezos’ house around 4:45pm: “Just walked by his house in Kalorama and found this in the street at his front door. Police had the street blocked off and someone appeared to be about to pressure wash it away…”

From a press release: “Today, a team of activists with La ColectiVA and ShutDownDC painted a mural on the street in front of Amazon CEO Jeff Bezos’ DC home. The mural read “PROTECT AMAZON WORKERS” in massive letters stretching from curb to curb.

The mural action was taken in solidarity with Amazon workers across the country who are being forced to endanger their health during the COVID-19 crisis.

“Whether it’s harming our environment or enabling ICE and police surveillance, corporations like Amazon are complicit in profiteering from practices that put us all, especially Black and brown communities, at risk,” said Danny Cendejas, an organizer with LaColectiVA and For Us Not Amazon. “We must hold corporations like Amazon accountable and demand our elected officials end corporate welfare so that our public resources can be available for community needs like housing, healthcare, and education.

This afternoon, advocates for healthy and safe working conditions in Amazon warehouses participated in an online town hall in which they called on Bezos to provide paid time off for illness, adequately clean warehouses, and end attacks on worker organizing. They were joined by environmental justice and racial justice activists.”

More Stories
“What kinds of things should we do to protect ourselves during the demolition and construction?”Your Afternoon Animal Fix