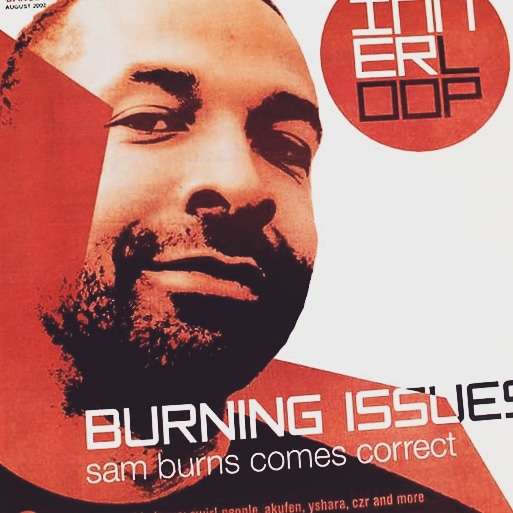 Sam the man Burns passed away on March 7. He was such a cornerstone of DC. There is an official GoFundMe here. There has already been a private service for his family, but there will be celebratory events after it’s safe to gather, I’m sure. Here’s something I wrote. -Courtney”

“I love life: all the drama, all the pain, all the passion, all the joys, all the highs, all the lows. We don’t write the script.”
Sam Burns 2002

Sam. The. Man. Burns.
What can I say about you that hasn’t already been said? I know everyone you left in your powerful wake is praying that wherever you are grants you the same healing, magic and salvation you gave to us when you were behind the decks. You were an idol, a god, a mentor, a friend, a force, a man. I am not going to pretend like I knew you better than I did, but I will share 3 lessons that came from you.

1. No judgment. You were one of the few house DJs that welcomed any new house blood with open arms. You never looked down your nose at me if I hadn’t heard about the Paradise Garage (yet). You didn’t roll your eyes when I told you of my dreams of playing at Red (and you even came to see me when it happened). You didn’t raise an eyebrow at a party-loving white girl for migrating to the house scene from the rave scene. I didn’t have to earn a seat at your table because anyone with a real love for house music could sit there.

2. Sundays at Red. Before house, dance music was warehouse parties full of MDMA and cocaine, walls echoing with the sterile sounds of trance and the icy tones of electronic music heavily produced in the U.K. And that has its place, no doubt. But one night in 1997, I heard Derrick Carter at Buzz, and I had never felt such soulful music before. That night changed my life. The very next day I went out and bought records. I started going to Red. I had never seen, heard or felt such power through sound like the music at Red. Blood, sweat and tears on the dance floor–no drugs needed. You helped me understand what house was about.

3. My name. The only thing you teased me relentlessly about was my DJ name: Apple. You would always say, “Why don’t you use your real name? Your name is your name. You don’t need a DJ name. You’re Courtney.” I mumbled some lame excuse about there already being a DJ Courtney. You refused to call me Apple, in public or private (unless your voice was dripping with sarcasm). The last time I saw you play was with 95 North at Patty Boom Boom, and you got on the mic and said “Hi COURTNEYYYY.” Even then I felt my cheeks get hot. You were right. So right, in fact, that when I married my wonderful husband Daniel, I kept my name–first and last.

In the 23 years since I first found house music, and after 2 decades of meeting you, Sam, I’m not sure how to say goodbye. How do you say goodbye to a person so big that you lived in their shadow and basked in their glow at the same time? All I can offer is this: a simple magazine I started with other friends who had the same passion and dedication to music that you did. And thank the heavens that my friends and I had the good sense to put you on the cover of that first issue. We already knew, in 2002, that you were the man.

Daniel and I saw you just 2 weeks ago walking through Columbia Heights. It was the same week we’d donated to your GoFundMe, so I knew you were dealing with some things. Our car idled at a stoplight and we started screaming “Sam! Sam!” even though the windows were up. You looked around, confused, then spotted us and graced us with that big, beautiful smile. I had my hand on the door, ready to jump out, run up and give you a hug. But the light changed and I thought, “I’ll just hug him next time.” You receded into the dark, arm raised in recognition, with me waving furiously goodbye.”