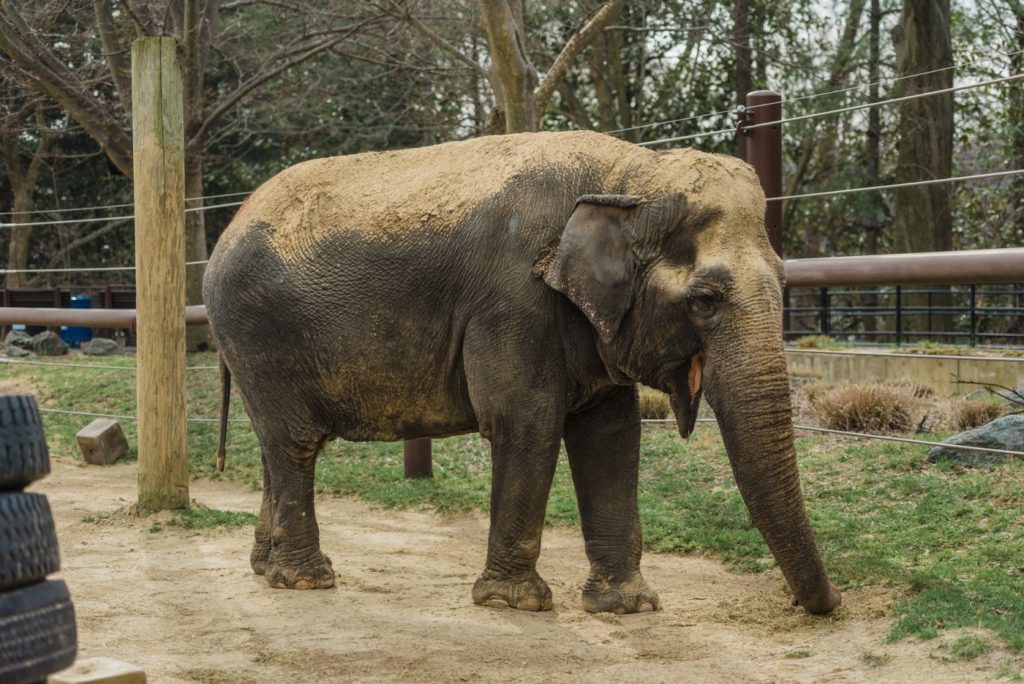 “Ambika, the beloved eldest member of our Asian elephant herd, was humanely euthanized yesterday. At 72 years old, she was a true giant in the conservation community. Having lived at the Zoo for 59 years, it is impossible to quantify the millions of people she has inspired to care about conservation. However, it is fair to say that all who knew Ambika loved her. We miss her dearly.

Last week, keepers noticed that Ambika’s right-front leg developed a curve that weakened her ability to stand. Though she had some good days and some bad days, staff grew concerned when she chose not to explore her habitat as much as she normally would or engage with her keepers or elephant companions, Shanthi and Bozie. In discussing Ambika’s overall quality of life, the elephant and veterinary team strongly considered Ambika’s gait, blood-work parameters, radiographs, progressions of her lesions and her tendency to occasionally isolate from Shanthi and Bozie. Given her extremely old age, decline, physically and socially, and poor long-term prognosis, they felt they had exhausted all treatment options and made the decision to humanely euthanize her.

Elephant keepers fondly remember Ambika’s sense of humor, particularly during mealtimes, when the persnickety eater would arrange her grains to her liking before eating. Ambika taught generations of keepers, scientists and visitors all about elephant biology, behavior, reproduction and ecology. She was one of the world’s most studied elephants, and her extraordinary legacy helped shape our collective knowledge of what elephants need to survive and thrive both in human care and the wild.

Born in India around 1948, Ambika was captured in the Coorg forest when she was about 8 years old. She worked as a logging elephant until 1961, when she was given to the Zoo as a gift from the children of India. Elephant keepers have fondly reflected on Ambika’s sense of humor, particularly during mealtimes, when the persnickety eater would arrange her grains to her liking before eating.

Most Zoo animals participate in the Association of Zoos and Aquariums’ Species Survival Plan (SSP); scientists determine which animals to breed by considering their genetic makeup, nutritional and social needs, temperament and overall health. Ambika never participated in the SSP for Asian elephant management. Rather than breed, she served as an educational ambassador for her species.

Ambika was one of the most researched elephants in the world. As part of the Zoo’s enrichment and training program, elephant keepers trained Ambika to voluntarily participate in daily husbandry care and medical procedures. Not only did this allow animal care staff to routinely monitor her health, but it also gave her the opportunity to help Zoo scientists better understand the behavior, biology, reproduction and ecology of Asian elephants. Ambika routinely allowed staff to collect blood samples for the Smithsonian Conservation Biology Institute’s endocrine lab to study cortisol levels, participated in studies that assessed elephant vocalizations and enrichment preferences, and enabled veterinarians to take carpal and toe radiographs to study the onset and progression of osteoarthritis. Most notably, Ambika was the first elephant to receive the gonadotropin-releasing hormone (GnRH) vaccine to prevent leiomyomas–fibroids in the uterus–which are a known cause of mortality in Asian elephants in human care.”