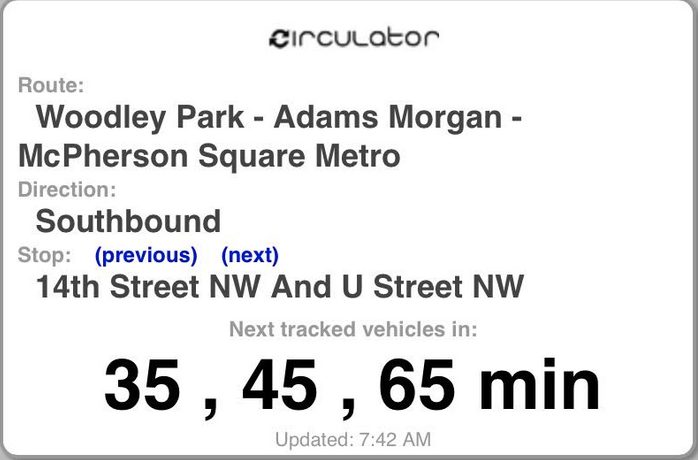 Just putting this out here since I’ve been increasingly frustrated with the inconsistent frequency of the Circulator service lately, particularly at rush hour. Their website continues to claim service “every 10 minutes” but that level of service hasn’t happened in many months.

It seems to deteriorate when the fare was made free a year ago and I expected it would perhaps get better when Council forced DDOT to reinstate the fare at the beginning of FY2020, but that hasn’t happened. Screenshot from this morning (Friday, February 7 at 7:42am) showing inbound at 14th/U NW with next Circulator coming in 35 minutes. I’ve found this app to be relatively accurate and I’ve been informed by DDOT that some buses simply don’t have functioning transponders, but I can see the 14th/U NW stop from my window and there are very rarely any untracked buses. Anyone else give up on the Circulator and instead hop on the next available WMATA bus?”