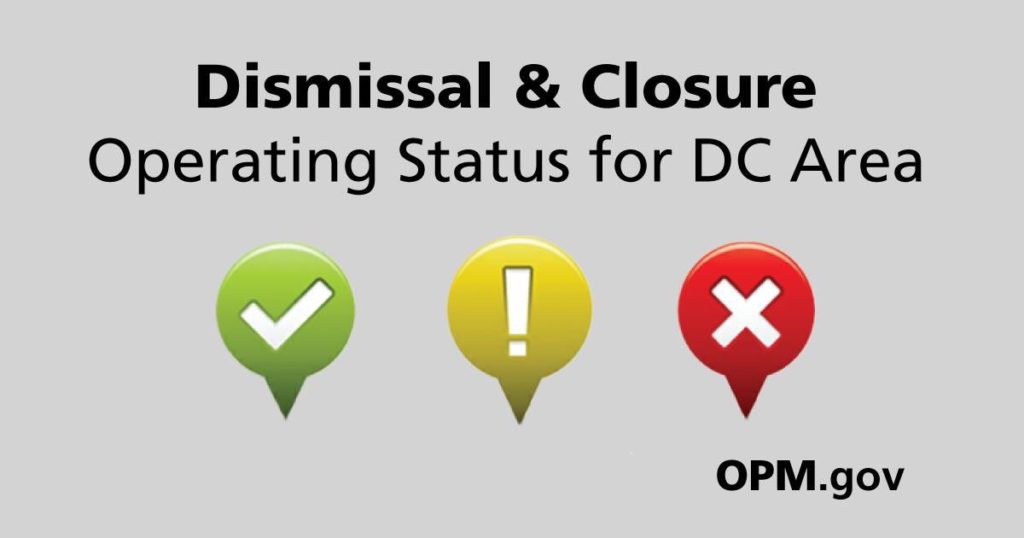 So about that snow – from OPM: “1/7: Federal offices in the Washington, DC area status: Early Departure 4 hour staggered early release all employees must depart no later than 1:00 PM.

Employees of Federal offices in the Washington, DC area are authorized for early departure. Employees should depart 4 hours earlier than their normal departure time and may request UNSCHEDULED LEAVE to depart prior to their staggered departure time. All employees MUST DEPART at no later than 1:00 pm at which time FEDERAL OFFICES are CLOSED.”

With snow moving into the area now, here are the amounts you can expect (first image), and the high end amount (second image). Generally expecting 1"-3", with 3"-5" across the higher elevations. High end amounts could add an extra inch or 2 to these totals. pic.twitter.com/YrxWOPNxXA

“Today, there will be no change to District Government Operating Status, and all DC Government offices and schools will operate under normal business hours. Some evening activities will be cancelled.

Since last night, the District Government has been coordinating with partners across the region and the National Weather Service to monitor the expected snowfall this afternoon and evening. Snowfall, which will appear heavy at times, is expected to occur between 3:00 p.m. – 6:00 p.m. However, little-to-no impact to roadways and walkways is expected. Residents should exercise caution while traveling home as snow will be falling.

DC Public Schools (DCPS) and afterschool programs remain open. All DCPS athletic events are cancelled due to weather. All evening meetings scheduled after 6:00 p.m. will be cancelled.

All basketball games at DC Parks and Recreation (DPR) facilities are cancelled tonight due to weather. All other DPR operations will continue.