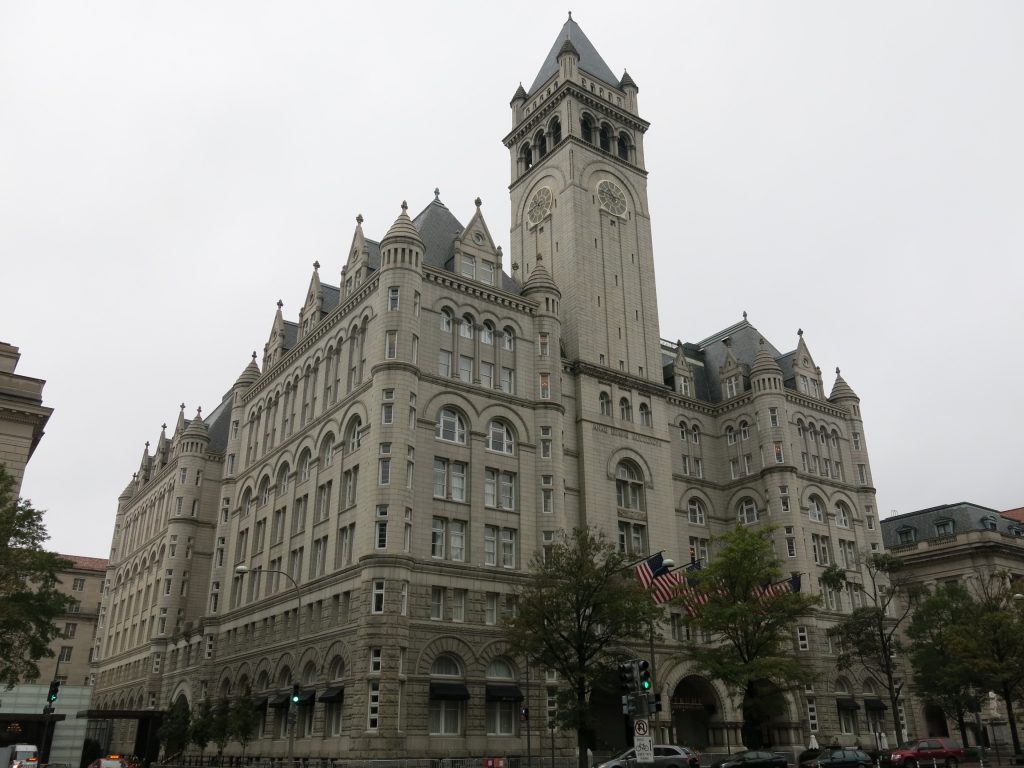 From the D.C. Office of the Attorney General:

“Attorney General Karl A. Racine today announced a lawsuit against the 58th Presidential Inaugural Committee and two entities that own or control the Trump International Hotel in Washington, D.C. for abusing nonprofit funds to enrich the Trump family. In its lawsuit, the Office of the Attorney General (OAG) alleges that the Inaugural Committee, a nonprofit corporation, coordinated with the Trump family to grossly overpay for event space in the Trump International Hotel. Although the Inaugural Committee was aware that it was paying far above market rates, it never considered less expensive alternatives, and even paid for space on days when it did not hold events. The Committee also improperly used non-profit funds to throw a private party for the Trump family costing several hundred thousand dollars. OAG’s lawsuit seeks to recover the amount improperly paid to the Trump Hotel, and to direct those funds to suitable nonprofit purposes.

“District law requires nonprofits to use their funds for their stated public purpose, not to benefit private individuals or companies,” said AG Racine. “In this case, we are seeking to recover the nonprofit funds that were improperly funneled directly to the Trump family business.”

The 58th Presidential Inaugural Committee (PIC) is a tax-exempt organization registered to do business in the District of Columbia. The PIC served as the primary vehicle for planning and organizing activities around the 2017 Presidential Inauguration of Donald J. Trump. The PIC’s bylaws prohibit it from using its funds for unreasonable expenses or to benefit private interests. The Trump Organization LLC is a New York-based corporation founded and run by the Trump family, with major real estate interests that include the Trump Hotel in the District. President Trump and his family are the primary beneficiaries of the Trump Organization’s profits.

OAG’s investigation found that Rick Gates, a Trump associate tapped to serve as Deputy Chairman of the PIC, personally managed discussions with the Trump Hotel about using event space, including the ballroom and meeting rooms, for allegedly official Inaugural events. As part of its investigation, OAG discovered that one of the PIC’s key event planners, Stephanie Winston Wolkoff, raised concerns about the Trump Hotel’s event pricing with President-elect Trump, Gates, and Ivanka Trump. This included issuing a written warning to Gates and Ivanka Trump that the Hotel’s final price proposal was at least twice the market rate. Despite this warning, Gates allowed the PIC to enter into a contract with the Trump Hotel for four days of event space at a total cost of $1.03 million, an amount far above even the Hotel’s own internal pricing guidelines.

OAG also found that the Trump Hotel went against industry practice and its own policy in refusing to offer the PIC discounted event space, even though the PIC arranged to book a sizable portion of the hotel’s available guest rooms. Further, on one of the days the PIC reserved event space, the Hotel double-booked its largest ballroom with a different organization–the Presidential Inaugural Prayer Breakfast. Although both organizations are nonprofits, the Prayer Breakfast paid only $5,000 for use of the ballroom, while the PIC still paid the day’s full event space rate of $175,000. Gates, with Ivanka Trump’s knowledge, also allowed the PIC’s nonprofit funds to pay for a private after-hours party for the Trump family at their Hotel, even after PIC staff initially canceled this event over concerns of improper use of funds. Gates allowed the event to move forward after Trump Hotel staff complained that canceling it would hurt the Hotel’s bottom line.

The Office of the Attorney General has the authority to oversee nonprofit business activities taking place in the District of Columbia. In its complaint, OAG alleges that the PIC and the relevant Trump entities violated District law by:

A copy of the complaint is available at: https://oag.dc.gov/sites/default/files/2020-01/Trump-PIC-Complaint.pdf

A copy of the supplemental investigation documents is available at: http://bit.ly/Trump-PIC-Complaint-Supporting-Documents

OAG is asking the court to impose a constructive trust over the amount improperly paid to the Trump Hotel. The court can then direct this money to suitable nonprofit entities dedicated to promoting civic engagement.”