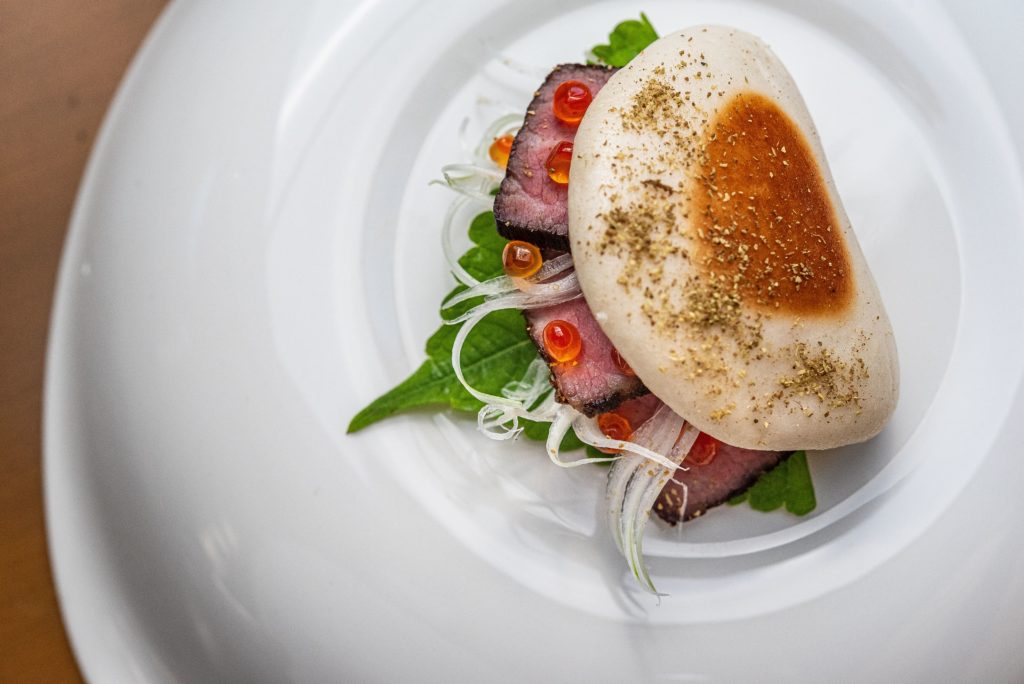 “Today, chef Pepe Moncayo announces a February 8 opening for Cranes, his first U.S. restaurant and sake lounge exploring the intersections of Spanish and Japanese cuisine via Mid-Atlantic ingredients. Cranes will debut its Spanish kaiseki menu for dinner service in Washington, D.C.’s Penn Quarter neighborhood at 724 9th St. NW in the former Ruth’s Chris space. The 12,000-square foot restaurant has 50 bar seats, a main dining room that seats 175 and a private dining room that can seat up to 25 people. Cranes will be open seven days a week and offer a weekday happy hour, with lunch to follow shortly after opening. Chef and co-owner Pepe Moncayo comes to D.C. most recently from Singapore, where his restaurant BAM! is a standout, and brings an impressive resume that began with his culinary upbringing in Barcelona, where he worked with famed chef Santi Santamaria as well as Javier and Sergio Torres.

“Spanish kaiseki is a natural combination,” Moncayo said. “Japanese cooking is well-represented in the culinary scene in Singapore, and I fell in love with it the moment I moved there. The more I learned about Japanese cuisine, the more similarities I saw with the cooking I grew up with in Catalonia. When you look at the two cuisines, there are so many shared elements, from the cooking techniques to the way we combine ingredients and flavors. I embraced a Japanese sense of simplicity, cleanliness and focus on ingredients, but with a Mediterranean approach, and, of course, the other way around as well. Having lived in Washington for more than a year now, I have begun to see how vital boundary-pushing is to this city’s modern culinary identity, and I’m excited for Cranes to be part of it.” 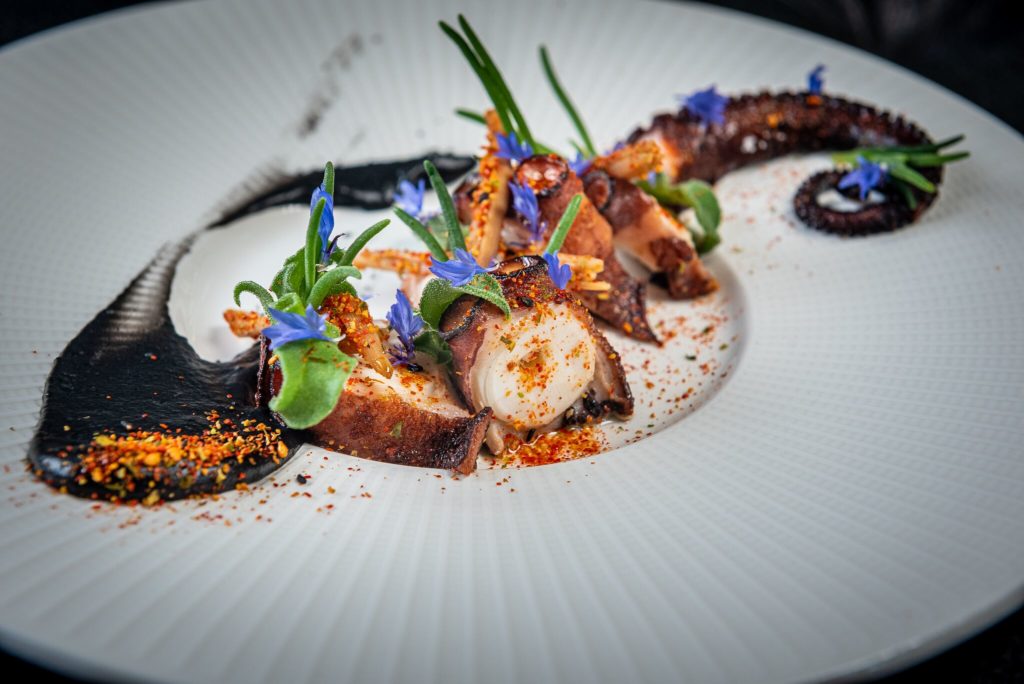 Moncayo’s flavor combinations are unique; they test the senses to show how naturally the Japanese and Spanish ingredients pair. A baby shrimp torta is dressed with aioli and tamarind romesco. Nameko mushroom rice is paired with burrata and a salad of enoki and shallots topped with porcini oil. Fried baby squid become luscious and piquant when served with soft-boiled egg, chorizo, and white onion purée. Ponzu and espelette pepper stand in for mignonette in a dish of fresh oysters, while sesame sauce and bonito flakes seem made for accompanying padrón peppers. In the style of Spanish bar and Japanese kaiseki dining, dishes are small, well-balanced, and designed for progressive service. Capellini noodles are served cold with king salmon aburi, ikura (salmon roe) and preserved lemon. One of the most striking dishes from Moncayo’s opening omakase menu pairs green beans, shrimp, sea urchin and ponzu in a gelatin parfait shot through with sharp citrus notes, deep ocean flavors and a rich crème fraîche base.

The restaurant’s sake lounge will be a separate space from the main dining room and feature an impressive list of Japanese rice wine — such as elusive bottles of Kotsuzumi Rojo Hana Ari “Aoi” Junmai Daiginjo and Yamada “Everlasting Roots” Tokubetsu Junmai — and classic cocktails. Bar manager, Monica Lee, will curate the list of mixed drinks and sake. Lee comes to Penn Quarter from the nearby Daikaya Group, where she served as beverage director for two years and built a masterful knowledge of Japanese rice wines and cocktails. Sake is a crucial part of what the Cranes team will do through strategic use of the beverage’s umami to unlock the diner’s palate by harmonizing with the natural fats and acids present in chef Moncayo’s food. The bar will also offer a condensed list of snacks that edits down the full Cranes menu to a selection perfect for bar dining.

These culinary aspects of Cranes form a base for the restaurant’s omakase menu: a fixed-price experience chosen each day by the chef that can be enhanced by an optional sake pairing.

D.C.-based architecture and design firm //3877 collaborated closely with Moncayo and his team to turn the 12,000-square foot space into a restaurant that reflects the chef’s cooking heritage and accomplishments. Inspired by the compositional beauty and colors of Moncayo’s culinary creations, as well as his Spanish and Japanese influences, the restaurant’s design is defined by its understated but warm elements; dark textures, polished metals, dramatic lighting, and sweeping architectural features that double as art installations and guides through the space. Favoring a Japanese aesthetic — with nods to the restaurant’s namesake — //3877 created mini ‘destinations’ from the entry, past the bar, and into the dining areas, creating the backdrop for a variety of culinary experiences wherever patrons are in the restaurant.

Pepe Moncayo is chef/partner at Cranes in Washington, D.C.’s Penn Quarter neighborhood, and a partner at Bam!, his first solo restaurant, opened in Singapore in 2013. At Bam!, chef Moncayo built an omakase-style experience unbound by geography. Living in Singapore for 10 years has enriched his cuisine with Asian ingredients and methods. Previous stops include stints under three Michelin star Catalan chef Santi Santamaria at his eponymous Santi in Singapore, Can Fabes and EVO, and as executive chef at two-Michelin-starred Dos Cielos with Javier and Sergio Torres.”