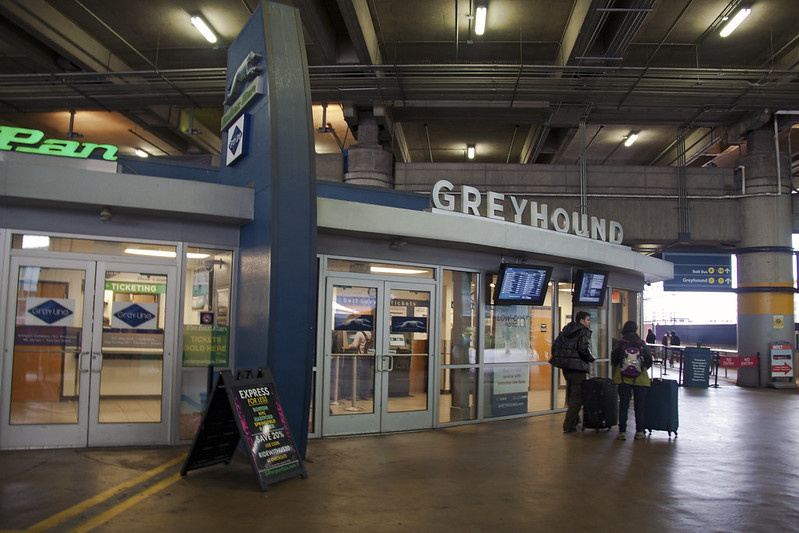 From the Attorney General’s Office:

“Attorney General Karl A. Racine today filed a lawsuit against Greyhound Lines Inc. for allowing buses to idle at Union Station for longer than the legal limit, polluting the air and endangering the health and safety of commuters and workers. A joint investigation by the Office of the Attorney General (OAG) and the Department of Energy and Environment (DOEE) documented 50 Greyhound buses parked, stopped, or standing at Union Station with their engines running for longer than the three-minute legal limit, many for more than 20 minutes. With this lawsuit, OAG is seeking to collect at least $216,000 in penalties, reimbursement for costs of the investigation, and a court order to stop Greyhound from violating the District’s air pollution control laws moving forward.

“Air pollution harms the health of thousands of people who live in, work in, and visit the District of Columbia–especially children, the elderly, and communities of color,” said AG Racine. “We’re working with DOEE to crack down on companies that violate the District’s environmental laws–like Greyhound–and to protect vulnerable residents who are most at risk to the harms of pollution.”

Greyhound Lines Inc. is a major bus company headquartered in Texas. It owns and operates buses that carry about 16 million passengers per year, through both its Greyhound and BoltBus brands. Greyhound-owned buses operate frequent service to and from the District’s Union Station.

Vehicle exhaust is the largest source of air pollution in the District and contributes to incidents of asthma, heart disease, and lung damage. It also pollutes the environment and contributes to global climate change and acid rain. To reduce emissions, the District adopted an air pollution control law and implemented regulations to limit vehicle idling.

Under District law, most gas- and diesel-powered vehicles are typically not allowed to run their engines for longer than three minutes while the vehicle is parked, stopped, or standing. Penalties for violating the anti-idling regulations may include fines of $500 for the first offense, $1,000 for the second offense, $2,000 for the third offense, and $4,000 for the fourth and subsequent offenses.

A copy of the complaint is available at: https://oag.dc.gov/sites/default/files/2019-12/DC-v-Greyhound-Complaint.pdf

“We take the air quality of our city very seriously,” said DOEE Director Tommy Wells. “Respiratory issues disproportionately affect children, seniors and low-income residents. That’s why Mayor Muriel Bowser has made it a priority to enforce our anti-idling laws in the District.”

District residents are encouraged to report suspected violations of environmental law, including suspected violations of anti-idling regulations, to DOEE by participating in the DOEE engine idling citizen enforcement program. Residents may submit an “engine idling tip” service request and photos using the DC 311 mobile app to report and submit information about violations that will allow for civil enforcement of the regulations.

Residents, business owners, and vehicle operators can find more information about the District’s anti-idling regulations and the guidelines for participating in the engine idling citizen enforcement program on DOEE’s website at: https://doee.dc.gov/service/engine-anti-idling-law

OAG’s Environmental Work
Over the past year, OAG has devoted new resources to protecting the environment and protecting the health and safety of District residents. OAG is deeply involved in the District’s ongoing cleanup of the Anacostia River and has joined numerous multistate lawsuits to stop the Trump administration from rolling back important environmental protections. The office is also focused on addressing persistent local environmental problems, especially those that affect low-income communities of color, and has filed suit against Ward 5 businesses that repeatedly spilled toxic oil onto sidewalks and streets, and against a Ward 7 landlord that exposed tenants to toxic lead paint.”