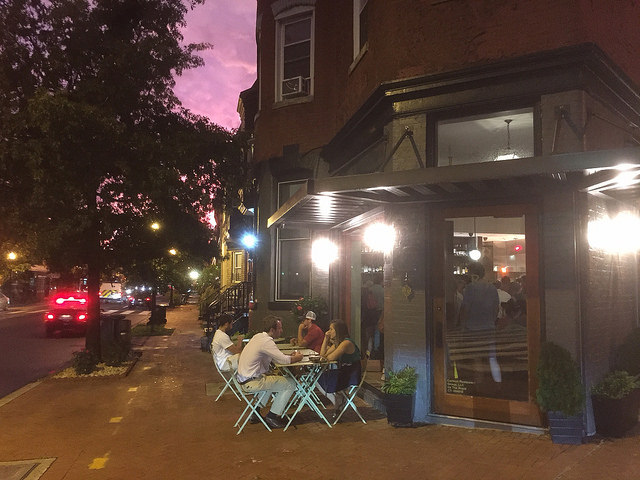 “September was proclaimed National Bourbon Heritage Month in 2007, and Royal in LeDroit Park is once again paying homage to “America’s Native Spirit” on Monday, September 9 from 8:30 p.m. to 1 a.m. with the latest installment of its monthly “Royal Knights” spirits exploration series. Guest bartender Colt Mattimoe of local DC whiskey-maker One Eight Distilling and formerly of whiskey mecca Jack Rose Dining Saloon, will collaborate with Royal’s bar managers Jake Kenny and Alonzo Freeman on eight creative bourbon-centric cocktails, shining the spotlight on the corn-based brown spirit. Guests can also enjoy a free tasting of One Eight whiskeys and discounted bourbon pours throughout the evening.

On behalf of the Royal, Kenny and Freeman found creative uses for the brown liquor, embracing fall flavors, pairing it with cigar-smoked dates, combining it with cider for a White Claw-esque tipple, and even incorporating it into a dessert cocktail. Their cocktails include:

Those who prefer their bourbon neat can enjoy discounted pours of One Eight’s District Made Straight Bourbon Whiskey and Rye. Mattimoe will also be pouring complimentary tastes of the distillery’s whiskey expressions beginning at 7:30pm.

For those who need a palate cleaner between cocktails, Royal will also offer $3 canned brews from beer sponsor Atlas Brew Works. And the kitchen will be open until 1am for hungry diners, with Chef Cable Smith serving up late-night-only Hatch Green Chile Smash Burgers for $9.

This is part of Royal’s “Royal Knights” event series, where on the second Monday of each month, they focus on a new batch of craft spirits, lesser-known liqueurs, and the creative people who make them, hosting guest-bartenders from around the country and introducing guests to creative new brands in the booze industry.”

Read more →
More Stories
What is up with Rotanda?!?!66th Great Garden Haul AKA Fruits (and Vegetables) of Your Labors