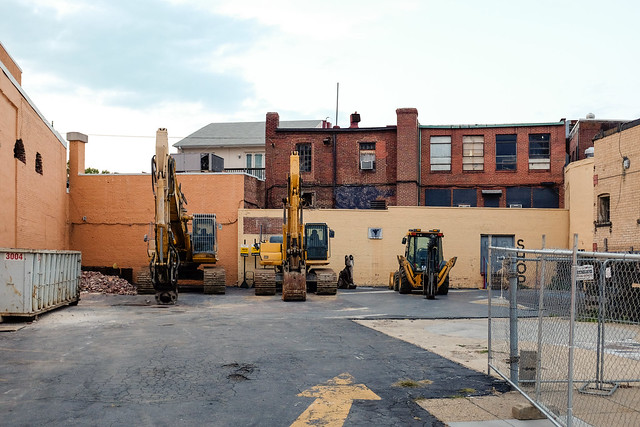 I was hoping readers could help with suggestions for a construction nuisance we’re dealing with in my building.

Our building has ~16 spaces along the backside of it, with traffic in the alley. On a daily basis, construction vehicles for a project on the next street over use the alley for access to the construction site, and block the entire alley. Most days it’s with their work trucks, on special days we get cement trucks that are completely immovable. The reality is that I’ve been late to doctor’s appointments, other residents can’t get to work, etc.

The issue we’re running into is, of course, enforcement.

It’s clear that the workers or the developer responsible for this site view us as a short term nuisance and all of this as their cost of doing business. We’ve called DDOT and they’ve promised to send inspectors, but we never hear anything back. When we call police for ticketing and towing, the workers move their trucks until the cops leave, then move them right back. They’ve left trailers parked in the alley overnight and leave massive piles of glass in the middle of the road.

It is a daily fight with this construction site for us to be able to come and go freely from our building. We’ve tried calling their site supervisor to no avail. Today, a police officer suggested calling DPW, but she suggested that MPD’s ticketing fines simply aren’t big enough to discourage the construction workers from parking there every day. It’s the world’s most frustrating game of whackamole.

Essentially, I’m hoping someone has had experience with this issue in the past and has found an enforcement mechanism that keeps public roadways clear on an ongoing and sustained basis.”