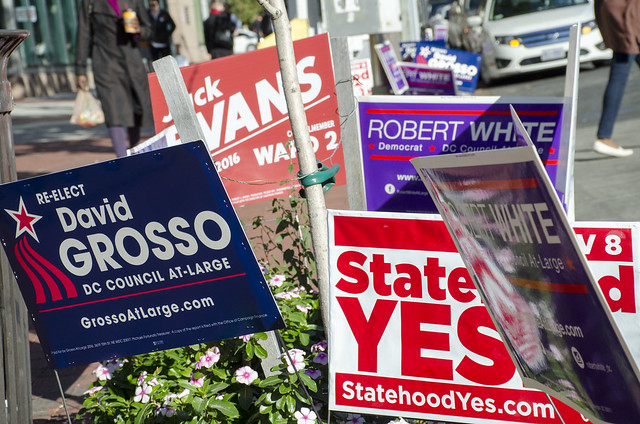 “The following is a statement from Councilmember David Grosso regarding Councilmember Evans’ latest dishonesty to the Council about the nature of his relationship with lobbyist Bill Jarvis:

“Tomorrow, the Council will consider resolutions to remove Councilmember Jack Evans as chairperson of the Finance and Revenue Committee and hire a law firm to conduct an investigation into his potential violations of the Council’s Code of Conduct. While I appreciate that the Council is finally acting to take Councilmember Evans’ misconduct seriously, it is frustrating that it has taken us this long to act to protect the Council’s reputation and hold our colleague accountable.

“Regardless of the actions we take tomorrow, given new revelations over the weekend of Councilmember Evans’ dishonesty, I believe the public trust in Councilmember Evans is irreparable and it is in the best interest of the Council and the residents of the District of Columbia that Jack Evans resign as the Ward 2 Councilmember. Short of that, I will be offering an amendment that would also remove him from all committees until the conclusion of this investigation.

“Last week, Councilmember Evans attempted to present his case to Councilmembers in response to the release of a memo from a law firm hired by the Washington Metropolitan Area Transit Authority to investigate Evans. This memo illustrated that Mr. Evans was not forthcoming and not truthful with his colleagues and the public about the findings of the WMATA investigation.

“My colleagues and I asked many questions, including the nature of the relationship between Mr. Evans and his consulting firm NSE Consulting with lobbyist Bill Jarvis. Councilmember Evans maintained that Mr. Jarvis was merely a long-time friend who helped file the paperwork creating NSE Consulting. However, over the weekend The Washington Post ran a story contradicting Mr. Evans’ claims yet again, summarizing e-mails demonstrating that Mr. Jarvis acted on behalf of the firm by negotiating contracts with potential clients.

“It is no longer possible to trust anything that Councilmember Evans has told us since this ordeal began. Councilmember Evans lied about what happened with the WMATA report, and now he’s lying about the nature of his relationship with a well-known lobbyist, Mr. Jarvis. We must now question votes and actions he has taken on the Council during his many years as chairperson of the Finance and Revenue Committee, and particularly during the past decade in which he has not once recused himself from a Council vote.

“Especially troubling is his rush to legalize sports wagering and to sole-source the contract to ensure his business partner’s client remains the incumbent vendor. The relationship between Councilmember Evans and Intralot’s lobbyist Bill Jarvis only reinforces my view that we should disapprove the proposed $215 million lottery and sports wagering contract, decouple the two issues, and open both to competition.

“This is an unfortunate situation of our own making. The Council failed to address the allegations of Councilmember Evans’ corruption, conflicts of interest, and misconduct when they first surfaced in early 2018. At that time I privately requested that Chairman Mendelson create an ad hoc committee made up of five Councilmembers to investigate. I re-iterated those calls in the subsequent months as new allegations and information came to light. The Chairman still has not appointed an ad hoc committee and has indicated that he is unlikely to do so until the fall.

More Stories
“Some neighborhood news that is not another closing”Helluva Way to Wake Up Vol. 1031