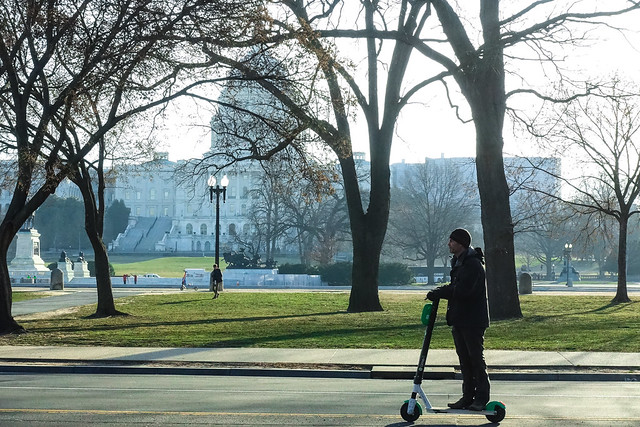 In her letter, Norton writes that electric scooters “are an affordable, environmentally friendly and efficient mode of transportation relied upon by increasing numbers of Hill staffers, D.C. residents and visitors to our nation’s capital. As such, electric scooters should be treated like motorized bicycles, mopeds, segways, and the other low-speed vehicles,” which are already permitted on Capitol Grounds.”

The full text of the letter can be read below:

I write to express my opposition to the policy that prohibits electric scooters on U.S. Capitol Grounds. I urge you to permit electric scooters while issuing narrowly tailored regulations to protect public safety. You have issued regulations governing similar modes of transportation, which should mean that I should not have to seek a legislative remedy. Despite the prohibition, scooters are widely used on Capitol Grounds, apparently without mishap.

I am aware that your agency sent a letter last month to many of the companies operating electric scooters in the District of Columbia. Your letter lists three primary arguments to support the agency’s prohibition. The letter states that the use of scooters and similar devices is prohibited by CTR §16.2.60, which refers to “Skating and Play Vehicles.” You also note that many of the scooters qualify as “low speed vehicles,” as defined by CTR § 15.6.10, and as such, may not be parked on sidewalks or against buildings. Finally, your letter indicates that commercial advertising and vending is also prohibited.

As to your first point, I urge you to reconsider the application of CTR § 16.2.60 to electric scooters. In addition to scooters, this section of the CTR also covers skate-boards, roller blades, kiddie cars, and tricycles–all toys used for recreation and very often used for travel over short or moderate distances at low speeds. However, electric scooters, which can reach speeds of over 20 miles per hour, are distinct from toy scooters in both operation and function and are an affordable, environmentally friendly and efficient mode of transportation relied upon by increasing numbers of Hill staffers, D.C. residents and visitors to our nation’s capital. As such, electric scooters should be treated like motorized bicycles, mopeds, segways, and the other low-speed vehicles under CTR § 15.1.20, the vast majority of which are responsibly regulated but are not prohibited on Capitol Grounds.

Next, concerns related to parking and commercial activity pertinent to some scooters should be addressed through narrowly tailored regulations that recognize legitimate concerns

regarding safety and advertising while accommodating the need to ensure that the Capitol Grounds accommodate today’s transportation technology. I believe that the concerns you have raised in your letter can be addressed by working with scooter companies to identify solutions. Furthermore, it is not clear to me how scooters used by private individuals would violate prohibitions against advertising.

While your letter notes the public safety concerns of unattended scooters on Capitol Grounds, many of these concerns can and should be addressed through collaboration with scooter companies, Capitol Police and users, reflecting an approach that represents the rapidly evolving nature of our transportation landscape.

I request a response within 30 days.