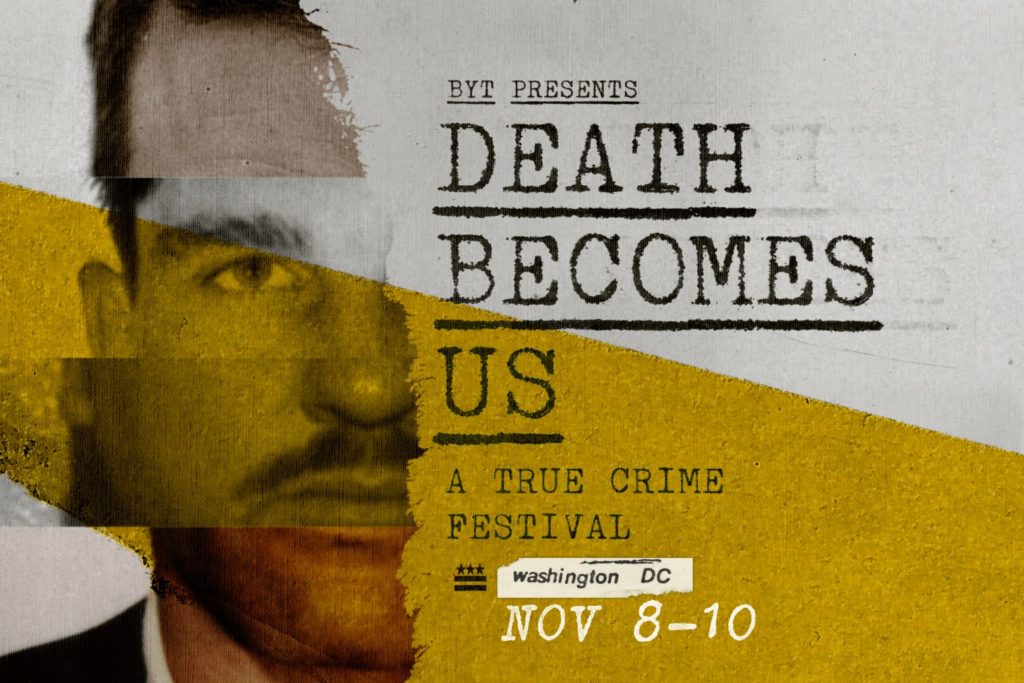 “BYT Media ​ today announces dates, location and initial talent for a thrilling new edition of their project: ​Death Becomes Us – A True Crime Festival – ​WASHINGTON D.C. EDITION​. The multi day event is the second edition of the festival, which saw ​its premiere edition in Washington D.C. in 2018​ and a Spring 2019 edition in New York City. The event is expected to attract upwards of 8000 attendees at Lisner Auditorium, November 8-10th, with warm up events and content leading up to it.

“The response to the inaugural D.C. edition was overwhelming, and so we are doubling up on festivals in 2019.” – says Jenn Tisdale, festival’s director – “The line-up will have some crossover with some of our favorite talent that spoke in Washington and New York previously, but our goal is to build a festival that is RIGHT for D.C. now.”

The initial talent announcement includes #1 true crime podcast in the country ​Murder Squad​ w/ ​Paul Holes​ and ​Billy Jensen​, a live edition of ​Amanda Knox​’s ​The Truth About True Crime​ (with a very special guest to be announced), a special true crime edition of ​Throwing Shade​ with Erin Gibson and Bryan Safi, as well as the return of some sold-out hits from the 2018 edition, including ​Buzzfeed Unsolved​ Live.

PLUS:
As always, expect more talent to be announced soon and festival surprises along the way: from the return of the Death Becomes Us pop-up bar to screenings, book events, happy hours, meet and greets and more.
Individual show tickets and information will be released on a rolling basis starting this week, but currently for those wanting to reserve their spots the​ Death Becomes Us All-Access Pass i​ s available right now. This *very* limited quantity pass guarantees entry for all shows at only $150 + fees. These are expected to sell out very fast (the previous D.C. edition sold out in less than 48 hours)

Complete details and updates are always available at ​DEATHBECOMESUS.COM​ / /// The all access pass is available now. Individual show tickets will be available on a rolling schedule starting this week.”