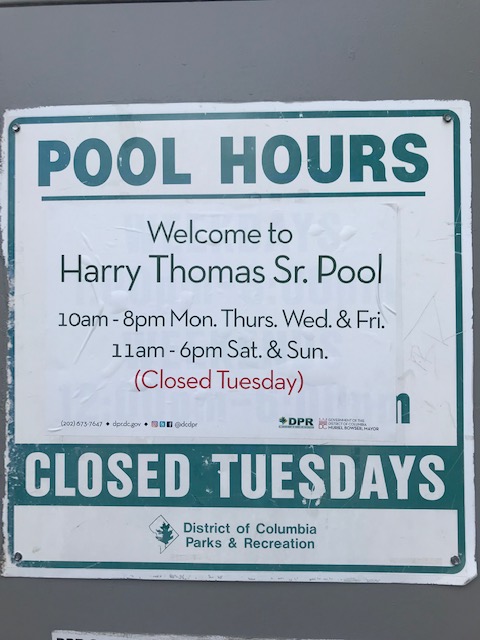 A number of people tried to go to Harry Thomas Sr. pool this morning at 10am only be turned away by staff who claimed that the 10am opening time posted on the DPR website and the door of the pool building (pic attached here) was “outdated information”. In fact the 10am opening time is supposed to be new this summer and Mayor Bowser had done a big press push about it.

I’ve so far had pretty fruitless attempts to contact DPR, my council member and the Mayor’s office about this.

But as I continue to do so I would be especially interested to hear whether this has been a problem for others either at Harry Thomas Sr or at other pools that were advertised as opening at 10am. When I called McDuffie’s office the staff person suggested it was “likely a staffing problem and they aren’t sharing that information with you” which isn’t very reassuring, especially given there have been repeated lifeguard shortages at Harry Thomas Sr pool for as long as I’ve lived in Ward 5.”

Read more →
More Stories
Here’s a Mouse about to get on an escalator at the Tenleytown MetroThe Sidewalk Repair Vigilante Legend, Kurt, is Back But Forced to Pack Up Again