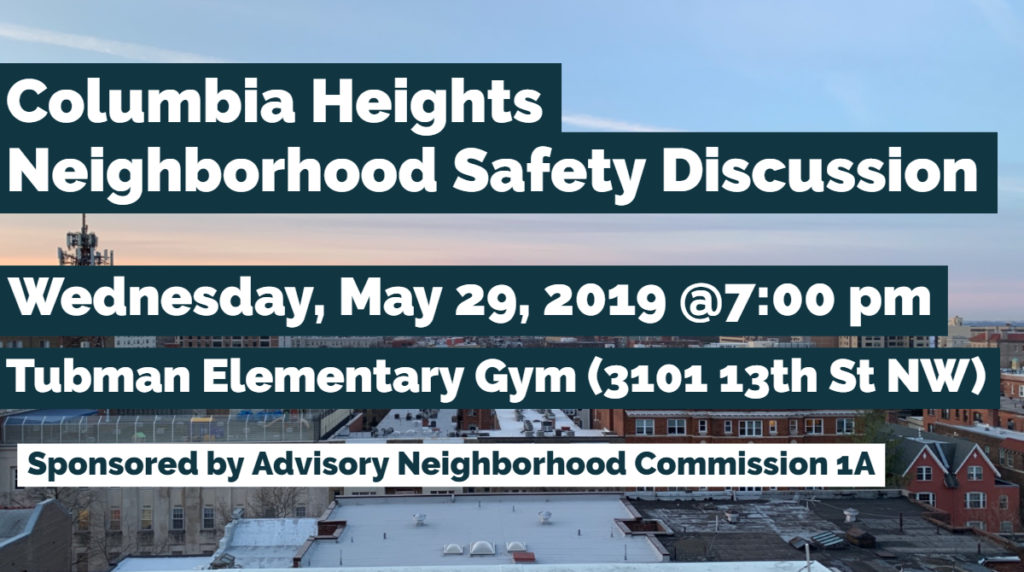 Thanks to Cait DeBaun for writing these up:

The Third District has stepped up on-foot/bike/car patrols both in uniform and plain-clothed/undercover in the high-activity area. The Crime Suppression Team (where VICE is now centralized) has also increased activity in the 3rd district. The MPD Chief approved overtime pay to meet staffing needs for increased patrols.

The gun violence isn’t attributed to one specific cause. It ranges from petty disagreements to drug deals to gang activity and often comes with uncooperative victims and witnesses.

The Third District is really focused on gun recovery and has seen results from this focus with dozens of guns and ammunition recovered in a short window (I missed the specific numbers, but it was impressive while also being a reflection of the sad reality of guns in America + the impact of DC statehood has on making our own laws).

The designated areas for the summer crime initiative are based on a historic analysis of summer crime trends. Columbia Heights did not qualify based on this metric, which I guess is a good thing(?).

Council Member Nadeau explained her work to get extra and permanent violence prevention funding for the area and the implementation of the NEAR Act. A representative from Collaborative Solutions explained their role as violence interrupters and historical efforts in Ward 1.

There was a lot of emotion at this meeting (myself included) and much of it was directed at the Council Member. To her credit, she took the heat. I do think Nadeau is actively engaged, securing resources, and supporting the MPD and community organizations as needed, which wasn’t my perception going in, mostly because I haven’t sensed urgency in her communications.

This meeting had a better cross-section of community members who have been in Columbia Heights for decades and those who are newer, which led to a more representative voice of the community.

Questions focused on causes for the violence, what MPD is doing, why the dramatic spike, what people could do, etc.

The commanders reinforced that the root of this is gun violence and illegal gun activities. While DC has strict gun laws, there is significant gun trafficking from Maryland and Virginia. There are working groups/coordinated activity among relevant law enforcement and policymakers across these jurisdictions, but at the end of the day, DC has much stricter gun laws than our neighbors.

There was a continual thread in the discussion around the need for civility and community around the neighborhood, especially because of transition/gentrification. One older woman who has lived in the area her whole life contrasted her experience in the 80s crime/drug epidemic when neighbors banded together despite the situation with today where she regularly experiences neighbors simply ignoring her direct attempts to engage.

Since I attended the 3D meeting to hear from the Commander and Council Member, I used this opportunity to ask the Mayor’s representatives why she hasn’t been present or vocal on this, suggesting that if the victim looked like me (white, female) that there would be a much more visibly present, engaged response. While one of the Mayor’s representatives responded by reading talking points, another engaged in the conversation and made me feel heard. If anyone is free, Mayor Bowser will be celebrating immigrant heritage month in Columbia Heights next week… Maybe a good opportunity to ask why she’s been publicly MIA here?

Toward the end, you could tell there was a frustration among the audience that while this meeting is nice, how does it prevent us from being here in six months to have the same conversation all over again?

The meeting concluded with a 7-year-old, in tears, asking “why does this happen?”

Between the two meetings, I felt like I had my voice heard, put pressure on those managing the response, and gained more appreciation for the work underway. At the same time, I didn’t feel like there were clear actions I could take to help the situation in the short term, which is frustrating. In the long term, we need to maintain the resources that fund violence prevention both for the MPD and community organizations. As individuals, we need to be more invested in our neighbors and community. Say hello to people you pass on the street, learn their names. Volunteer with/give to organizations who are working directly in Ward 1, especially with kids and young adults to show them there all alternatives (e.g., Reading All Stars at Tubman, Collaborative Solutions, ONSE’s Pathways).“

Next
“Rosé All Day at The Yards This Saturday!”