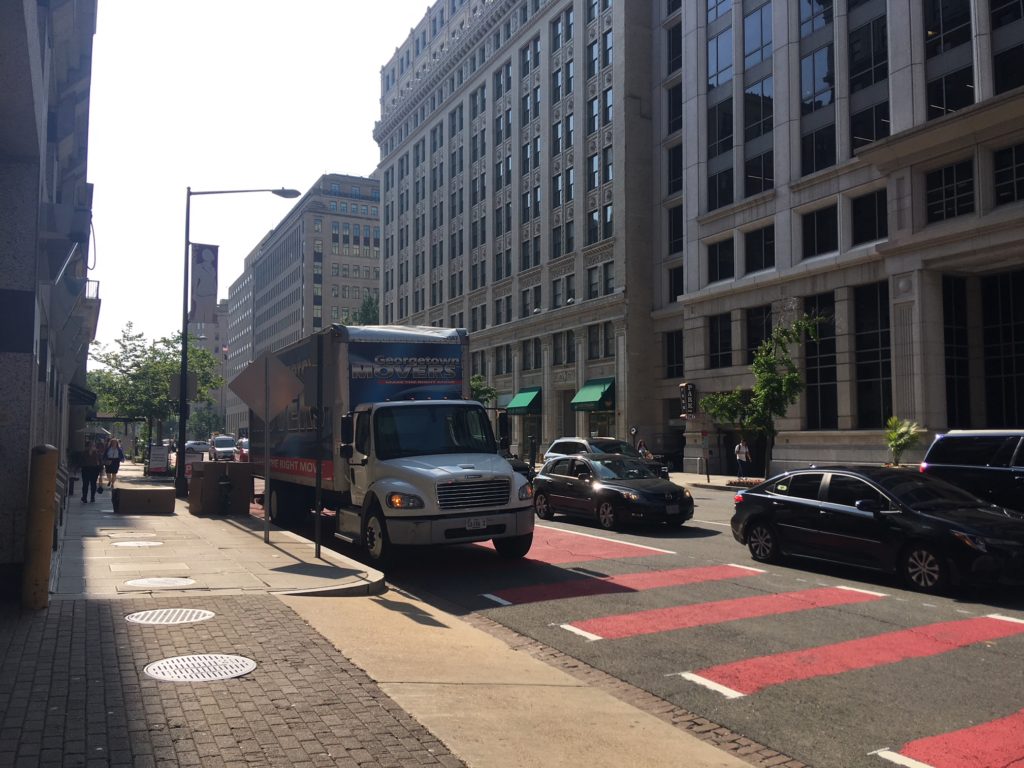 Thanks to D for sending yesterday from “H street, rush hour.”

Ed. Note: We checked out the new H and I Street bus lanes yesterday.

All the info about the bus lanes from DDOT:

“Bus riders travelling on H and I Streets NW currently experience very slow travel speeds, as slow as 2.8 miles per hour in some sections. However, these streets are some of the District’s busiest bus corridors, with up to 70 buses per hour during peak periods.

To help improve bus travel speeds and reliability for the routes that use H and I Streets (which represent up to 20% of Metrobus riders in the District), the District Department of Transportation (DDOT) is implementing a bus lane pilot on both streets, roughly between Pennsylvania Avenue and 13th Street NW. The pilot will operate during Summer 2019, which coincides with the partial shutdown of the Metrorail Blue and Yellow Lines from May 25 to September 2, 2019. The 11Y bus route, which is an alternative transit option for Metrorail riders impacted by the Metrorail closure, travels on H and I Streets NW, and the bus lanes would add reliability to this alternate commute.

During the pilot, the right-side curb lanes will be dedicated to buses during the AM and PM peak periods:

In addition to buses, right-turning vehicles, bicycles, charter buses, school buses, and marked taxis would be allowed to use the bus lanes. Parking is currently restricted on both H and I Streets NW, so no parking will need to be removed as part of this pilot. All alley and driveway access will be maintained. DDOT will use red paint, pavement markings, and signs to designate the bus lanes. Buses will service all existing stops.

The temporary bus lanes will be located on:

The pilot will start June 3, 2019 and extend through September 27, 2019. DDOT will collect data throughout the pilot period to evaluate the performance of the bus lanes, including multimodal safety, bus speeds and reliability, and vehicle operations and access.”

More Stories
True this is from Daufuskie Island, SC, Also True this is not a True White Whale But Oh My Goodness“As the victim complied, the suspect, without provocation, began to stab the victim numerous times.”