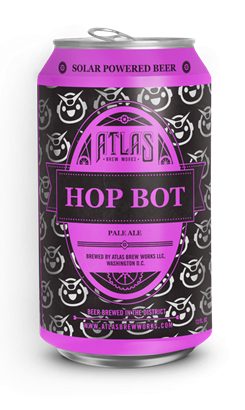 Hop Bot is generously hopped with funky Citra and juicy Mosaic hops. Atlas adds wheat malt to the grain bill of the pale ale to give the beer a robust body and silky mouth feel that perfectly complements the floral and citrus flavors from two of the brewery’s favorite hops. The blend was derived to play off the iconic robot face that has become emblematic of Awesome Con since it began in 2012 and will be used on the cans and tap handles at participating locations.

“We’re so excited to partner with Awesome Con on this exclusive beer,” said Atlas Brew Works Founder & CEO Justin Cox. “Atlas can’t wait to host attendees at the brewery and for the DC community to try this stellar collaboration.” Ron Brister, Vice President of Events at LeftField Media, LLC, producer of Awesome Con, added that, “This convention has always been about the local fans of all kinds of pop culture. It seemed appropriate as we keep growing to partner with an outstanding brand like Atlas to bring some local flavor to the fans.”

From the Funk Parade:

“Funk Parade is proud to announce that Aslin Beer Co. will be releasing “Keepin The Funk Alive” a Funk Parade-themed beer for the 2019 Festival happening on Saturday, May 11th.

“Keepin the Funk Alive” will be a special Sour Ale brewed with Dragon Fruit, Passion Fruit, Blackberry, Milk Sugar and Vanilla. “The beer will be light, sweet and slightly tart, which should complement the weather in May,” says Andrew Kelley, Aslin Beer Co. Co-founder.

Aslin will be releasing the cans of the beer for purchase at their warehouse and facility located at 257 Sunset Park Dr, Herndon VA 20170 on May 4, 2019. Aslin will also be donating a portion of the proceeds from the sale of the cans to support The MusicianShip, the new stewards of the Funk Parade Festival.

“At Aslin we always strive to look for new environments for our customers to be able to try our beer. After the Funk Parade team reached out to us, we thought it was a no brainer to partner and brew a beer with a team that is so involved in D.C.’s art culture,” says Andrew Kelley, Aslin Beer Co. Co-founder.

For those of you who won’t be driving out to Herndon, though you are missing out if you don’t, Aslin is working with official Funk Parade venues, restaurants, and bars throughout the U Street corridor and DC to have kegs of the beer on tap the weekend of the Festival. Establishments serving “Keepin The Funk Alive” are also promising to donate a dollar from each sale of the beer to support The MusicianShip.

“We are grateful to Aslin Beer Co. for supporting our mission and look forward to creating a fun, safe day for all,” says Jeffery Tribble Jr., Executive Director, The MusicianShip.

If you are a restaurant, bar, or music venue in the district and would like to have “Keepin the Funk Alive” on tap the weekend of May 11th please shoot an email to [email protected] and we will connect you with the brewers. Funk Parade will be releasing a full list of establishments serving the beer around the district in the next couple of weeks.”

Next
Meiwah to open in a new location downtown after closing in West End?