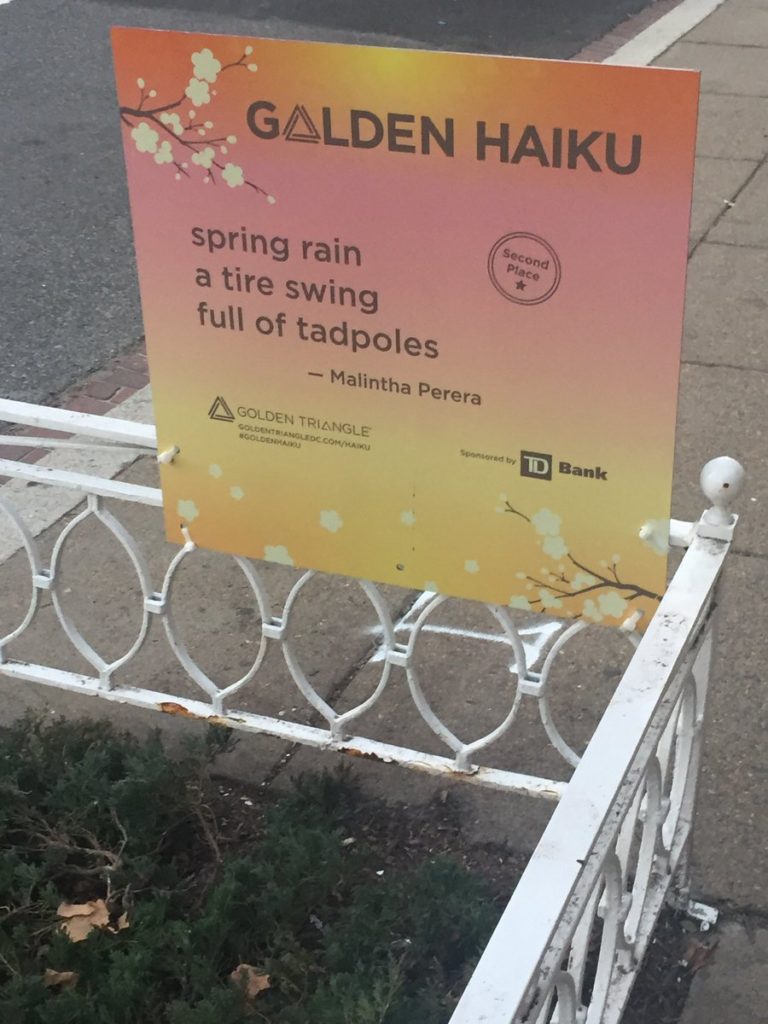 Kbuts asks: “Anyone else notice that those “Golden Haikus” downtown aren’t actually haikus?”

The Golden Triangle BID writes us:

We follow the Haiku Society of America’s guidelines for haiku! Because English and Japanese are such vastly different languages, the 5-7-5 structure gets lost in translation and is not required for our entries.”

“Award-winning haiku poetry submissions from around the world and around town can be seen now on the bustling sidewalks of Washington, D.C.’s Golden Triangle Business Improvement District (BID), a 43-block neighborhood that stretches from the White House to Dupont Circle. Having received nearly 2,000 entries from 50 countries and 41 states, and the District of Columbia, the Golden Triangle Business BID today proudly announces the 2019 awardees of its sixth annual Golden Haiku contest, sponsored by TD Bank.

The internationally celebrated contest invites poets to submit up to three haiku to be judged by an expert panel. For the contest’s purposes, the Golden Triangle uses the Haiku Society of America’s guidelines for contemporary haiku. This means that although participants can adhere to the familiar 5-7-5 syllable rule, it is not required. Haiku are meant to be short, breezy poems that evoke an image in the reader’s mind. This year’s contest theme was “Spring in the City.”

Now through April, award-winning haiku entries, along with dozens of honorable mentions, will be featured in tree boxes along some of the city’s most busy sidewalks. The colorful signs will brighten the winter landscape and remind us all that spring is around the corner. In total, more than 300 signs of haiku submissions will be posted within the Golden Triangle BID.

This year’s Golden Haiku award-winning authors and their selected haiku submissions are as follows:

reaching the top
of the metro escalator –
a warm breeze

Each of the award winners will receive gift cards as prizes.

“Every year our Golden Haiku competition extends its reach even further – engaging poets from around the world, and in our own neighborhood, flooding DC’s central business district with art,” said Leona Agouridis, Executive Director of the Golden Triangle BID. “Seeing the poetry presented so beautifully along the bustling streets really puts a smile on the faces of passersby, helping them push through the last few bleak weeks of winter towards the promise of spring.”