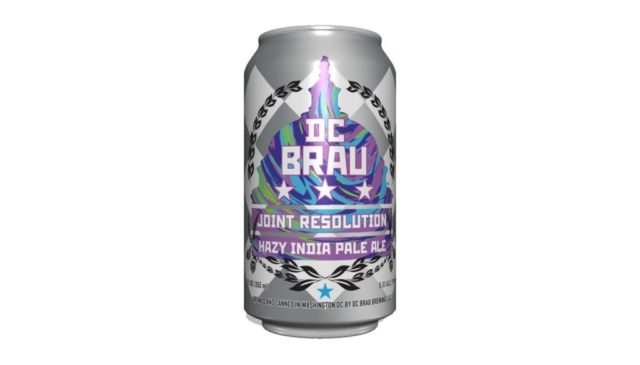 “DC Brau is amending its current flagship line-up with Joint Resolution, a new Hazy IPA, which will replace its award-winning Citizen Belgian-style Ale this March. Fans of the golden domed can will see the beer return as a seasonal offering, scheduled for early Fall 2020.

“We’ve seen a significant shift in the palates of our consumer over the past eight years, and feel like it’s a good time to freshen up our core, year-round offerings with a Hazy IPA,” says CEO & co-founder of DC Brau Brandon Skall. “The Citizen remains a favorite style of ours, and we look forward to bringing it back as a seasonal just in time for what will surely be an interesting election season.”

Joint Resolution is a Hazy India Pale Ale with a drinkable 5.5% ABV and approachable level of bitterness incorporating Canadian Pale 2-row, White Wheat, Flaked Oats, Carafoam and Acidulated malts, and a mix of hops including Michigan Copper and Chinook varieties among others.

According to DC Brau’s co-founder and Brewmaster Jeff Hancock, “we’ve formulated a very quaffable Hazy offering that will hit on all the notes hop heads are looking for. We’ve kept the ABV on the lower side so the hops can play more of a starring role in this aroma-forward IPA.”

Hancock explains that the high protein and dextrin-laden malt bill and aromatic hops of this unfiltered beer will contribute flavors akin to Hawaiian fruit punch with mango, orange, tangerine and cannabis flower with overtones of citrus and resin permeating throughout, coming together for total flavor satisfaction.

Along with the introduction of Joint Resolution, the entire flagship series — including The Public, The Corruption, and Brau Pils — will be offered in new 12-pack variety boxes featuring three 12-ounce cans of each of the four flagship beers. The new can’s design features the distinctive DC Brau logo with a blue, purple and green swirl Capitol Dome. A limited run of The Citizen was recently canned for those wanting to stock up their stores before the beer goes on hiatus.“

Read more →
More Stories
“The theme of this year’s NoMa Summer Screen is “WHO’S GOT GAME?” – Vote For Which You Want To See15-month $8.75 Million Restoration of the Thomas Jefferson Memorial Begins