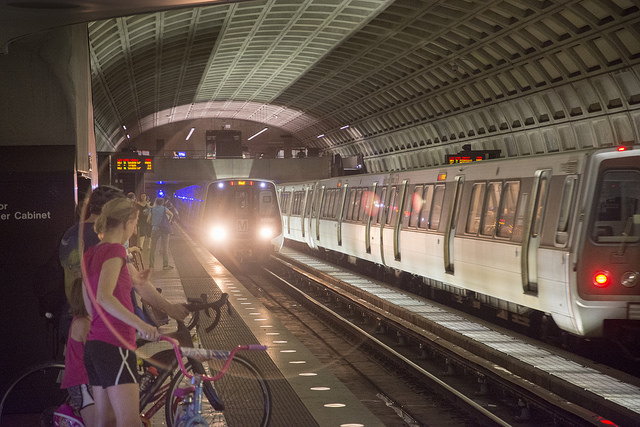 “Starting next week, Metro customers will be able to bring their bikes with them on the train – at any time – as Metro ends a longstanding restriction that prohibited bicycles during rush hours.

The policy change, which takes effect Monday, is expected to make Metrorail a more attractive travel option for reverse commuters (i.e. customers traveling outbound in the morning and inbound in the evening) who want to take their bike to travel between the rail station and their workplace.

Metro reviewed its policy and determined that it could respond to requests from the bicycling community by ending the rush-hour bike restriction without significant negative effects.

The review took into account that the majority of rush-hour trains are 8 cars in length (the longest possible), and that new 7000-series trains provide more open space.

“We received requests from Washington Area Bicyclist Association (WABA) and others in the bicycle community asking us to take a fresh look at our policy,” said Metro Chief Operating Officer Joe Leader. “We believe this change supports ridership growth by Metro a commuting option for those who want to have a bike with them.”

The Washington Area Bicyclist Association welcomed today’s announcement. “Bicycling extends the reach of Metrorail for customers at the beginning and end of their trip. Members of the community have long wanted the option to bring a bicycle along with them on their rush hour trips, especially reverse commuters.” said Greg Billing, WABA Executive Director. “I have to say that we’re pleasantly surprised with how flexible and accommodating Metro has been in responding quickly to this request. We are grateful to leadership at Metro for this policy change to permit bicycles during all hours of Metrorail operations.”

When Metrorail first opened, bikes were not allowed in the system at all. Since then, Metro has incrementally loosened restrictions without significant problems. Bikes were first allowed in 1982, with a paid permit on weekends and holidays only. The days and hours when bikes were allowed gradually expanded over time. Permits were eliminated in 1998, and the current policy was established in 2001, allowing bikes at all hours except weekdays from 7-10 a.m. and 4-7 p.m.

Starting Monday, standard-size bikes will be allowed at all times, on any car of any train, provided that space is available. Customers with bikes are reminded to use the doors at either end of the railcar – not the center doors – and to avoid blocking doors or aisles. Metro will monitor implementation of the new policy to determine whether any modifications are necessary. In addition, Metro reserves the ability to restrict bicycles on the rail system during major events drawing high ridership, such as July 4 fireworks and Inauguration Day.

Customers can also bring their bikes with them on Metrobus. All 1,500 Metrobuses are equipped with a rack on the front that can accommodate up to two full-size bikes at a time.

Roughly 0.8 percent of Metro customers arrived at their rail station by bike in 2016. The WMATA Board has set a goal of increasing that percentage to 2.1 percent by 2020.”