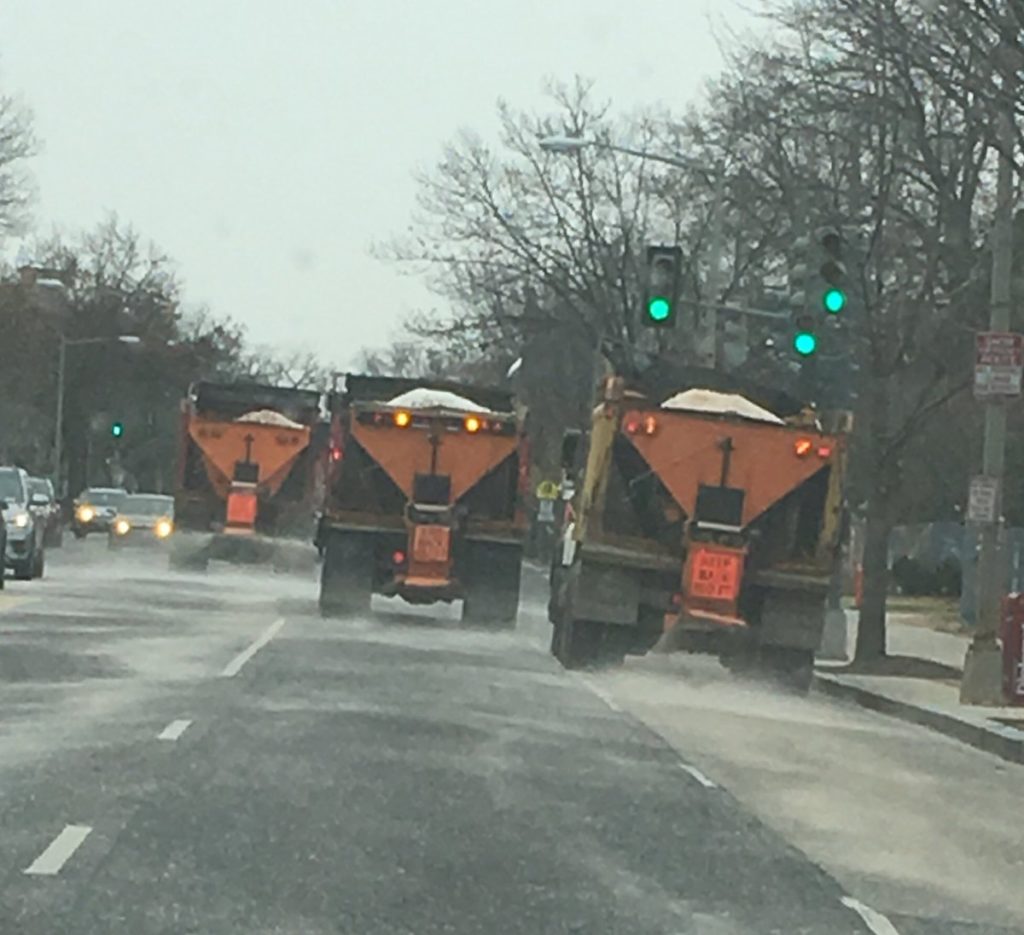 Photo by Adam O’Neill
‏
Thanks to Adam for sending:

“At least no one will be able to complain the city wasn’t ready. Trucks are out treating the streets on Wisconsin Ave.” 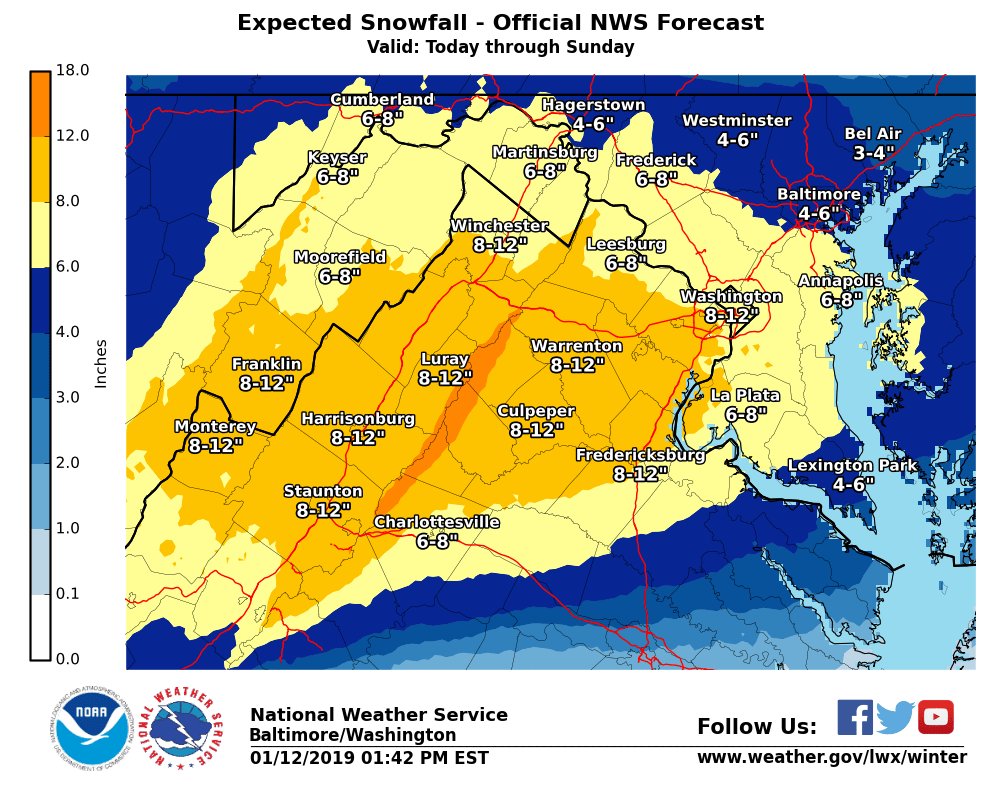 From the National Weather Service:

“Winter Storm Warnings have been expanded further northward this afternoon as expected snowfall has increased for much of the area. #Snow will persist into Sunday, potentially mixing with rain/sleet across southern MD. Latest.” 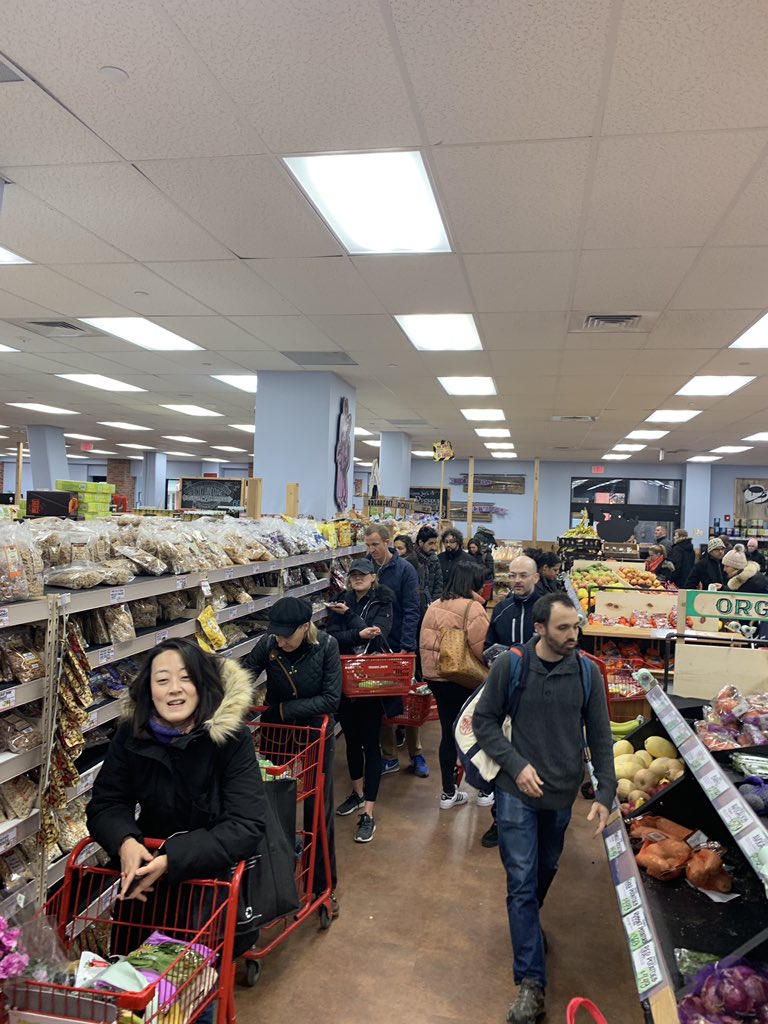 “DC handling impending with usual restraint and calm. The 14th street TJ’s line is wrapped to the bread section, which frequent guests will know is BONKERS.”

From the Mayor’s Office (Friday):

“With the National Weather Service (NWS) forecasting two to four inches [Ed. Note: Updated accumulation totals above.] of snow in the District this weekend, beginning sometime Saturday afternoon and continuing into Sunday, Mayor Bowser has deployed the DC Snow Team to begin pretreatment of roads. On Thursday, January 10, the Snow Team began treating National Highway System roads with liquid brine, and the Mayor has ordered the deployment of more than 200 trucks to pretreat all District roads on Saturday, January 12. The DC Snow Team will continue its deployment through Sunday evening, treating and plowing roads as necessary. Residents and motorists can register to receive important weather alerts from the District on their devices by signing up for AlertDC at alertdc.dc.gov.

Despite the continuation of the partial government shutdown, the National Park Service will be bringing in personnel to cover the network of roads, sidewalks and pathways under the responsibility of the federal agency, as is their normal snow plan.

The DC Snow Team encourages residents and commercial property owners to apply abrasives such as rock salt, de-icer, or non-clumping kitty litter to the sidewalks around their properties to reduce the possibility of icing and to prevent slips and falls. After the storm, property owners are also asked to shovel their sidewalks.

Mayor Bowser is committed to a quick completion of plowing and salting along major roads and residential streets, which in turn means a faster return to normal traffic flow and earlier resumption of trash collection and other city services. To report any concerns, residents should call the Citywide Call Center by dialing 311.

For more information about DC’s snow program and preparing for winter weather, or to see where District Snow Team plows are working, go to snow.dc.gov. Ongoing updates are also posted on the social media accounts of the Department of Public Works (DPW): Facebook, Twitter, and Instagram.

Low-Barrier Shelters for individuals operate year-round and will be open 5:00 p.m. to 9:00 a.m. If a Hypothermia Alert is issued, all shelters are open all day and will remain open during the extent of the Hypothermia Alert.

Hypothermia Shelters are open from 7:00 p.m. to 7:00 a.m. anytime a Hypothermia Alert is called, except in recreation centers, where, due to previously scheduled programming, the shelter opens at 9:00 p.m.

Increased Outreach: The Department of Human Services (DHS) will amplify outreach efforts during the weekend to raise awareness about the availability of Hypothermia Shelters.