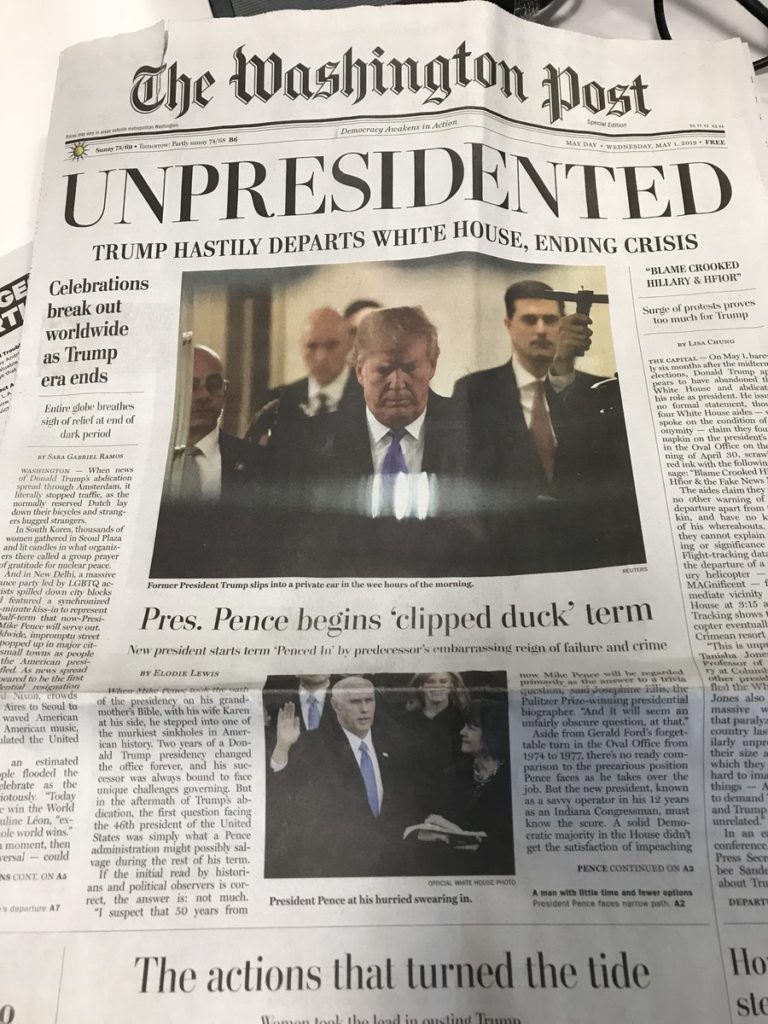 Thanks to Tom for sending:

“have you seen these? A group was handing them out around the White House. No organization identified”

Anyone else get one? If you did, where did you get yours and were there “articles” in the whole paper?

Update: Whoa – they sent email blasts out too: 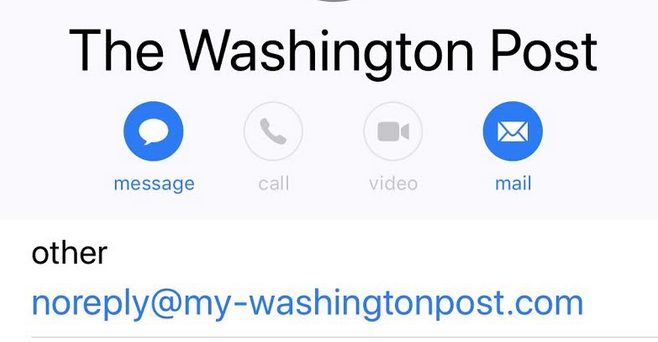 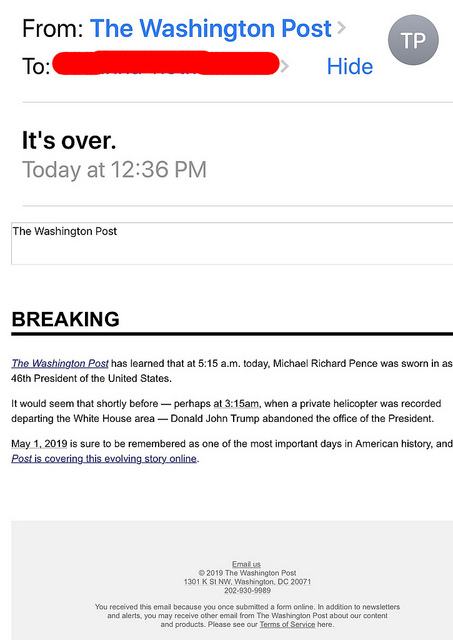 Update from “The Desk of the Yes Men”:

“Early this morning, thousands of commuters in Washington, D.C. were handed a spitting image of the Washington Post. But this one was dated May 1, 2019 — and in lieu of the Post’s usual tagline, “Democracy Dies in Darkness,” the phrase “Democracy Awakens in Action” appeared at the top. The paper’s lead headline: “Unpresidented: Trump Hastily Departs White House, Ending Crisis.” (An online version of the paper has also been making the rounds, at my-washingtonpost.com and democracyawakensinaction.com, complete with PDF of the print version.)

A scan of the paper’s front page offers up a compelling backstory for Trump’s flight: a women-led, multi-racial grassroots resistance. Their winning strategy is borrowed from other movements against authoritarian rulers: target those who support the tyrant, rather than the tyrant himself.

That strategy has also led to growing support for a package of groundbreaking progressive legislation known as the “Bundle”: 64 bills sure to be popular across the political spectrum, including some — the Green New Deal bills, Medicare for All, the H.R. 1 election reform bill — that already are.

“The story this paper tells is more reasonable than our current reality,” says author Onnesha Roychoudhuri, who created the paper together with author L.A. Kauffman and trickster activist collective the Yes Men. “And it’s anything but far-fetched. We’re already seeing unprecedented levels of protest and resistance. Now we just need to ask ourselves: What’s next? This paper offers a blueprint to help us reclaim our democracy.”

Also included in the paper is an action guide, “Bye-Bye 45: A Guide to Bringing Him Down,” in which leading strategists outline ways to bring about the paper’s ambitious vision.

The special Post edition outlines other elements of this very possible near-future: Mike Pence is sworn in for a “clipped-duck” term–held in check by the millions of Americans who have mobilized, protested, occupied their elected officials’ offices, and otherwise thrown sand in the gears of his predecessor’s tyrannical presidency. The “actions that turned the tide,” according to the paper, are diverse and colorful, and include widespread, everyday resistance like ride-share drivers refusing to pick up Trump administration officials. Larger-scale actions include sticky and rambunctious “sippy-cup sit-ins,” in which mothers with young children occupy their representatives’ offices until they agree to stop cooperating with Trump. And there’s also a “wall of floof,” in which young women in quinceañera gowns use their layers of taffeta to blockade a government building.
“This newspaper is a fantasy,” says Kauffman, “but it’s rooted in both reality and scholarship. Our stories build on real-world resistance to Trump and insights about how ordinary people can dislodge an unfit leader.”